Two exhibitions just opened at a pair of well-respected West End commercial galleries here in London, seem to illustrate the complexity of the contemporary art situation as it is now.

One, at Timothy Taylor, features work by three Parisian avant-gardists of the post-war years. They are, respectively, Soulages (b. Averron, 1919), Hantaï, (b. near Budapest, 1922) and Tàpies (b. Barcelona, 1923). All of them, however, were associated with the Ecole de Paris. As the exhibition handout tells one “they came of age as artists amid the poverty and bomb-shattered debris of post-war Europe.” Looked at today, their work seems hermetic. It is about the manipulation of materials, often in self-consciously radical ways, not about the creation of immediately recognisable images. The message to the audience is: “This is art as it is now – you’d better get used to it.” And this audience is elite, with sensibilities already finely attuned by previous experience of Modernist artistic expectation. The public envisaged by these works is one very far from the populist audience that large-scale institutions devoted to promoting contemporary art look for today. When they do, from time to time, exhibit practitioners of this generation and this sort – Soulages, for example, is due to have a show in the Louvre this coming December. But it is almost invariably in some kind of historical context. Not as artists who make things of immediate relevance to the culture we live in now.

There are, of course, some elements of the ‘now’. You probably can’t look at Tàpies’ LLit obert (Open Bed) without thinking of Tracey Emin’s My Bed, created in 1998 and first exhibited in 1999 as one of the short-listed works for the annual Turner Prize. It comes as a bit of a shock to discover that Llit Obert, also quite big enough to lie down on, was made only twelve years previous to this. Realistic, but made of enamel on fire clay, it seems to belong to a different aesthetic universe from the one Emin inhabits. One where the artist’s ego didn’t matter so much. Or at any rate to one where this ego was shy about manifesting its own central importance. Is this a good thing or a bad one?

It is both the strength and the weakness of these artworks that you have to take the trouble to unlock them. And often, it must be said, the key is a little challenging to find. This is basically a show that addresses an elite. One that is very much aware of its own specialness. One’s feeling is that this is an elite now quietly fading away. 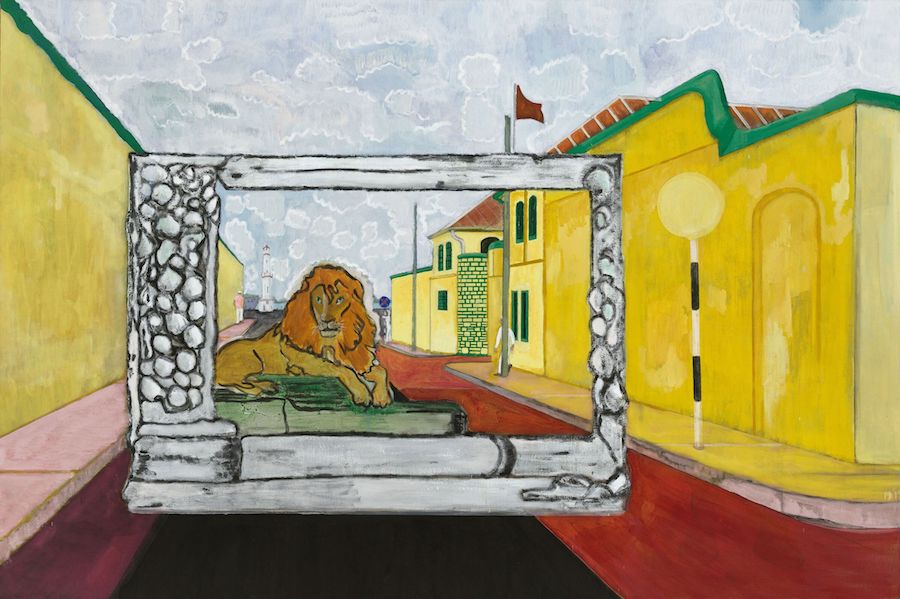 The other show – Peter Doig, Paintings at the Michael Werner Gallery – couldn’t be more different. Born in Edinburgh in 1959, and therefore just three to four years older than Tracey Emin, Doig has spent much of his time since the millennium in Trinidad. He also teaches at the academy in Dusseldorf. He won the first prize at the John Moores exhibition in Liverpool in 1993, has been nominated for the Turner Prize, and was a Tate Gallery trustee from 1995 to 2000. His work is represented a large number of significant museum collections, both in Britain and also in the United States. It fetches high prices at auction. In 2017 a 1991 painting sold for $28.8 million at Phillips, and in recent years Doig’s work has made prices almost as high as this at Christie’s. By any measure, he is a major practitioner of contemporary figurative painting.

I was therefore surprised and maybe a trifle saddened by how little impact his current exhibition made on me. Because the compositions are figurative, and in no way distorted, they are easy to get into. You recognise immediately what they show you. There are two big pictures of lions – pretty much the sort of lion you’d see on an inn sign. There are also two – a big one and a little one – of a man, apparently black – pushing another black person in a wheelchair. There was nothing transformative about these Images. And nothing to invite empathy. In my case, alas, I had no such reactions. My eye travelled over them and then passed on.