‘Life-destroyer’, ‘get lost’, ‘monkeys’, ‘in bad faith’, ‘malediction’, ‘concealed dungeon’, ‘poison head’, ‘parasite’, ‘disenchantment’, ‘lechery’. The titles of Peter Howson’s latest work, in translation from often Latin or Anglo-Saxon words or phrases, give a graphic sense of the content. The title of the exhibition Acta Est Fabula translates as ‘The play is over’ reported to be the Emperor Augustus’ last words, and commonly used to announce the ending of a dramatic performance in Ancient Roman theatre.

Throughout his career, Howson has interwoven themes of conflict and destruction, human suffering and redemption – JE

Throughout his career, Howson has interwoven themes of conflict and destruction, human suffering and redemption in his imaginative portrayals of contemporary society. This new exhibition takes place 25 years following his first visit to Bosnia (in 1993) as Britain’s official war artist documenting the Bosnian War. The paintings he made then documented the highly disturbing human atrocities that he witnessed. His paintings on contemporary social and political themes have since been founded on increasingly nightmarish visions of chaos and atrocity, portraying the universal suffering of humanity. In this, his most recent work, he addresses his fears of the rise of right-wing politics around the world. 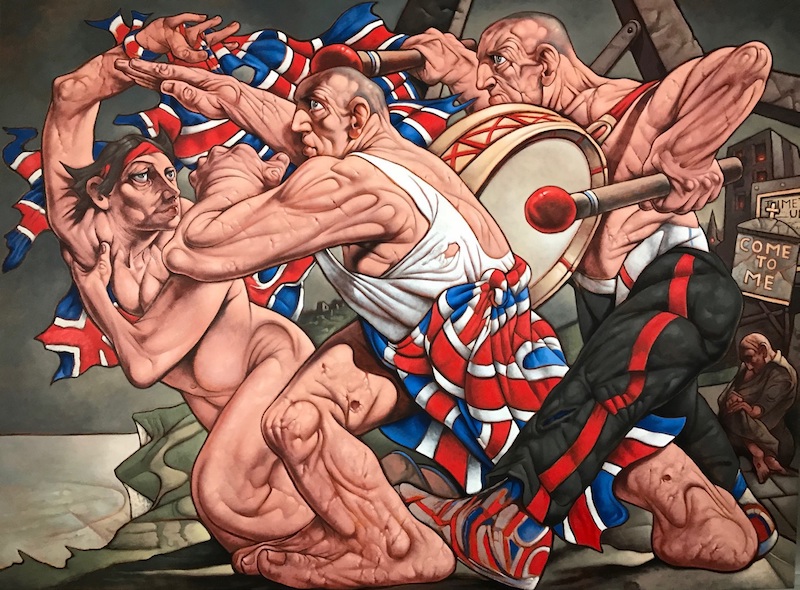 With this exhibition, we are immersed in scenes of degradation, imposed and sought out, within which occasional moments of self-realisation and awareness occur. This is common ground for Howson, whether in Glasgow, Bosnia or elsewhere; homo homini lupus (man is wolf to man) is consistently demonstrated throughout the world and throughout history. Howson stands with all those artists, such as Bosch, Goya, Dix and Rouault, who have sought to raise our gaze from the mire by painting the extent to which we are sinking in the mire. There is a strong apocalyptic strand to the images he is currently creating; apocalyptic imagery fuelled by the experience of Brexit and the wave of populism of which Brexit is a symptom and for which it was a catalyst. In these images, he signals his Brexit preoccupations with his use of our flag, the Union Jack.

Tattered and torn flags flap listlessly from crude crosses at the centre of scenes of carnage and crudeness inflicted by post-apocalyptic crowds. The painting Siste Viator (translated as ‘Stop, Traveller’, a phrase often found inscribed on Roman tombs), is a monumental canvas depicting an apocalyptic mob-scene strewn with wounded bodies and debris, including a burnt-out motor vehicle. Central to the work is a vividly painted, tattered Union Jack flag, while a similarly brightly painted sign depicting a comet hanging from the wall of a tavern, appears to warn of further impending disaster. Britain has been crucified by the Brexiteers, and the result is the apocalyptic aftermath, an infinite extension of the increase in hate crimes that followed the Brexit vote itself. 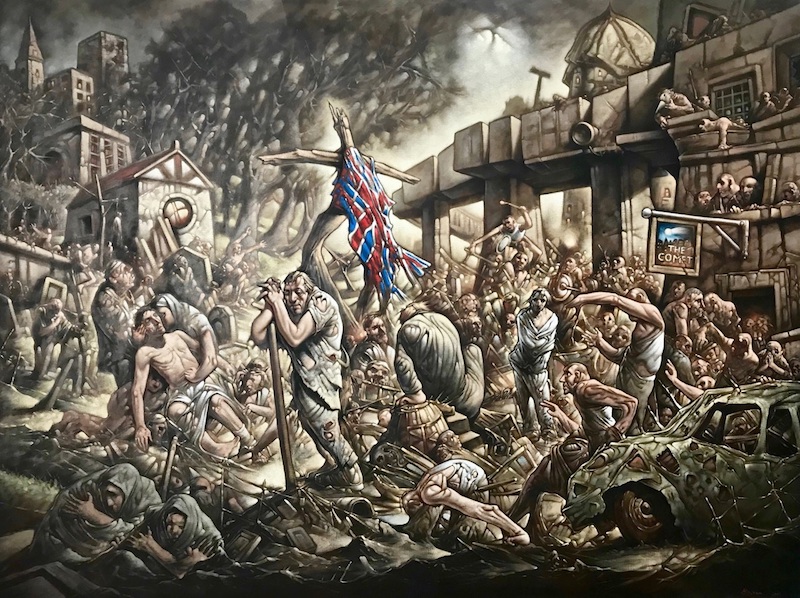 Howson’s art has regularly excoriated those who view themselves as patriots by means of their violent scapegoating of those who are other. These images are the apotheosis of such excoriation. This is perhaps most apparent in two images (Ealdor-Bana and Oxymoros) that depict men using the Union Jack to mask their faces in the manner of criminals, terrorists, hooligans and rioters.

Howson is inspired by the Neue Sachlichkeit and Magic Realist artists, such as Otto Dix and Max Beckmann, whose work has been powerfully highlighted recently in exhibitions at Tate Britain and Tate Modern. Such work has enormous resonance currently because there are significant political and social parallels with the period of the Weimar Republic and therefore Howson’s anguished expressionist imaging of far-right posturing and threat is a potent prophetic warning for our time and a reminder of the power of expressionism in responding to such apocalyptic times.

Among the anguish and violence inherent in these works, moments of self-realisation and awareness are also to be found. Figures similar to that in The Third Step which equate to Howson himself, who views the chaos and conflict he depicts as his internal state as well as representing the state of the nation, are pictured, generally alone but, in one instance, at the centre of the conflicted crowd. This is Howson’s testimony that, despite the violence filling his canvasses and our lives, we don’t have to be driven by our mimetic desires and can consciously reject and control the conflicts which otherwise tear us apart and destroy us.