In the current context of London exhibitions, the unabashed rock-‘n’roll energy of the Philip Colbert Hunt Paintings’ show, recently opened upstairs at the Saatchi Gallery comes as something of a relief. It offers quite a contrast with what is on view at the two Tates. Go to Tate Modern to watch some big lumps of ice melt, hugging to yourself the knowledge that someone took the trouble to truck them all the way from Norway. Or else venture to Tate Britain, get the weight off your feet. Plonk yourself down and watch 4 ½ hours-worth of Turner Prize videos, hopefully with the same reverence you might bring to a Wagner opera of about the same length.

‘We live in a world of ultra-pop saturation, where mass intakes of Instagram merges with artistic memory.’ – Philip Colbert 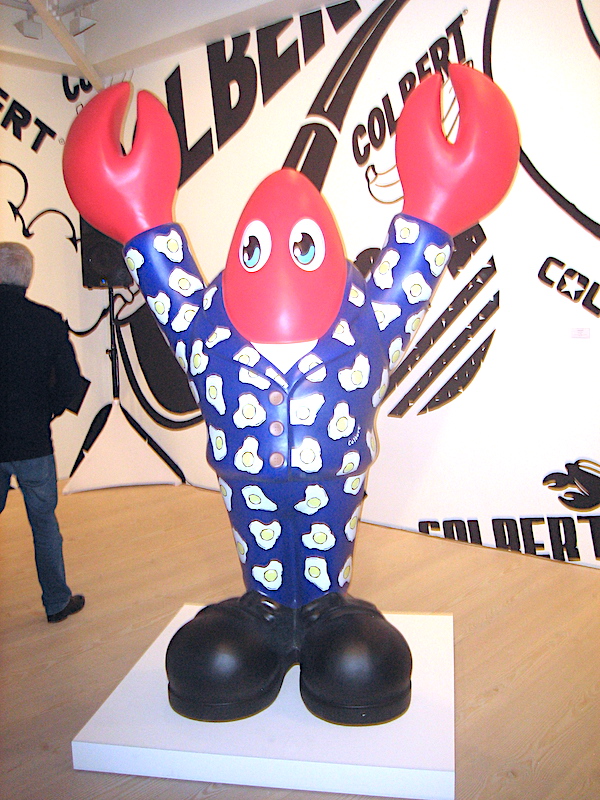 Clearly, Colbert has a very different idea about what the art of our time should be doing to integrate itself with the wishes and fantasies of contemporary society. His work is big and loud – made still louder by the to-volume rock music played at the exhibition opening. It is allied both to the world of comic strips and to that of current big-budget Hollywood epics. If Spiderman doesn’t actually appear, then his spirit or avatar isn’t far off. Lobster images serve as a kind of substitute. There’s a roaring energy to these big paintings with their tumbling masses of hybrid figures, However-often you come back and look at them, you can never feel entirely certain that you’ve taken everything in. The idea of a ‘still centre’ has no place here.

In one way it’s easy to classify these works. And maybe to dismiss them. They are Post Pop. Without the now long-ago Pop Art movement they couldn’t have come into being. As Colbert has said: ‘We live in a world of ultra-pop saturation, a sort of mega-pop world where mass intakes of Instagram and social media imagery merges with artistic memory.’

His work also owes a lot to Surrealism, that most stubbornly durable of art movements. It has more remote ancestors as well – for instance in the churning energy of some of Rubens’ canvases of hunt scenes. You might perhaps describe them as a kind of Rubens delirium or fever-dream, with scattered fragments of contemporary modernity thrown in.

What audience do these huge canvases address? At the slightly feverish opening, with till more bodies pressing to get in – more than these largely galleries with comfortably hold – that question was easy enough to answer. Compared with the kind of audience one sees at Tate openings, the demographic was rather conspicuously younger. Yes, the grey heads were still present, mine included, but we were very much in the minority.

The fever dream offered by these large paintings was precisely what this crowded audience responded to. Colbert is not in fact that young. He is in his mid-forties and has worked in a very wide variety of media. He has designed clothing, furniture and has worked in the world of pop music. He has a large cadre of celebrity fans. But he is very far from the rather strident moralism that now pervades so much official or would-be official art. Can one guess which faction will prevail? The answer to that is surely a no-brainer. Colbert and his cohorts will prevail. When it comes to giving the younger audience what it wants, something that reflects their vision of the world, he has few rivals. The preachers are going nowhere. 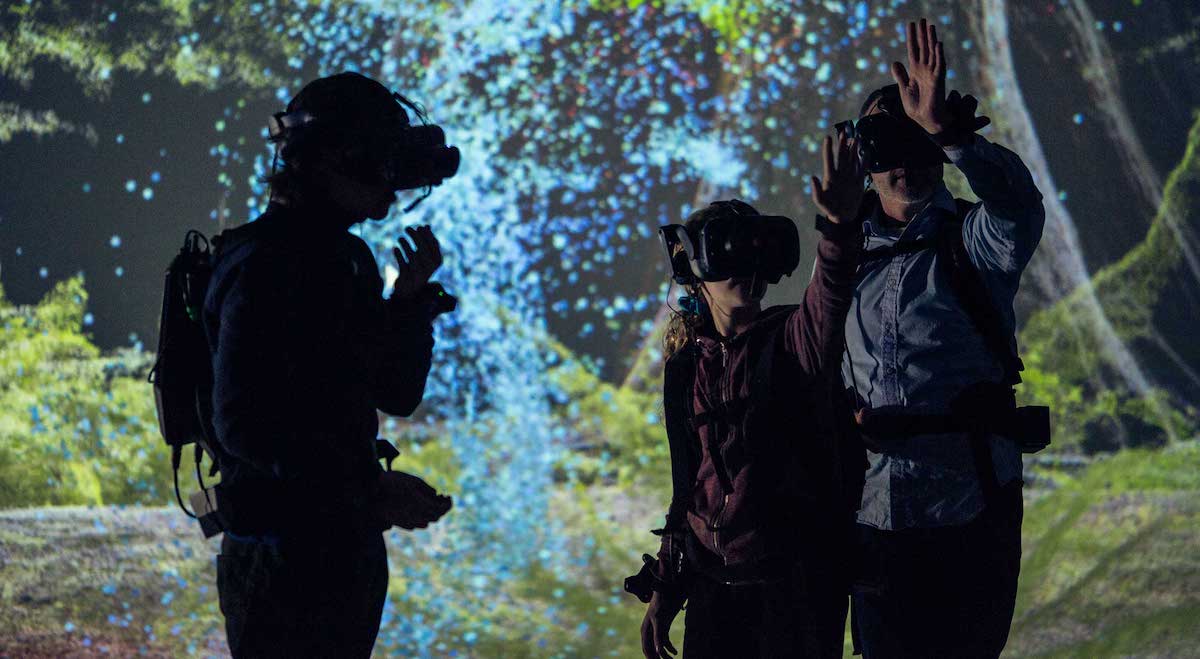 Sometimes the art world catches me unawares, not always – it must be said – in a good way. But when the surprise is good, then it’s time to celebrate.

I’ve just been to an event at the Salon section of the Saatchi Gallery – that is, to something in the not huge space they rent out in their semi-basement. The announcement wasn’t particularly alluring – “Saatchi Gallery Premieres Marshmallow Laser Feast’s Multi-sensory Virtual Reality Installation, ‘We Live In An Ocean of Air’” – but I thought I’d give it a try.

Arriving at the press view, I found myself being kitted out with quite an array of stuff: a heavy backpack, wristbands, earphones and an enclosing helmet, then being gently propelled into what I knew to be a totally bare room. After that, the fun began. Wow! I can’t do better than quote the press release:
“Using cutting-edge technology, the work explores the invisible connection between plants and humans through breath, allowing the viewer to interact with an entire ecosystem around a giant sequoia tree – the largest living individual organism on the planet.

What’s offered actually lives up to the hype; ‘Oxygen and carbon dioxide are made visible, with each exhale of your breath, the very essence of life is seen before you.”

What this means in that you not only see and feel the presence of the giant tree, but you are surrounded by drifting clouds of coloured dots, representing the various kinds of energy involved. And you are intimately part of it. Some of the dots seem to show you the blood coursing in your own bare arms and hands.

Let me confess: I’ve been waiting for a big step for big steps forward in the world of virtual reality, without imagining that they might take this specific form – a literal oneness with nature. You can perhaps think of it as a culmination of what the artists and poets of the 19th century Romantic Movement imagined. JMW Turner would have loved it. So, too, perhaps would Hokusai, whose masterpiece is the print The Great Wave at Kanegawa. Technology is now offering a great step forward, but not necessarily a step away from things we already instinctively know. In fact, the reason the show at Saatchi makes such an impact is exactly that it makes manifest things that are already dormant within our consciousness.

At the moment there’s a revolution going on in art – one that promises to go much beyond the kind of dinky little videos just presented to us by the competitors for the Turner Prize. Much beyond, even, the much more ambitious slowly scrolling video that formed such a striking part of the recently closed Oceania show at the R.A.

The kit required may seem a bit clumsy, but I think I’m in a position to say “I’ve seen the future, and it works.”