Hauser & Wirth have demonstrated an impeccable sense of timing by presenting their Richard Milhouse Nixon show, ‘Laughter in the Dark, Drawings from 1971 & 1975’, first seen in their New York gallery in 2016 – that is to say actually before Donald Trump won the American presidency in December of that year. Much of what it contains now seems uncannily prophetic of the political narrative in America as it has developed since then.

Short as his time in office has been, many people already think that Trump may meet a similar fate.

The exhibition consists of a long series of satirical drawings made by Philip Guston in 1971, with a few more added in 1975. The drawings, with the series title Poor Richard, excoriate the character and actions of one of Trump’s predecessors, Richard Nixon, the only American president to have been forced to resign because he was about to be impeached. Nearly fifty years have passed since they were made, but looking at the drawings now what immediately comes to mind is the famous epigram coined by Alphonse Kann, a mid-19th century French journalist: ‘plus ça change, plus c’est la même chose’ – ‘The more things change, the more they remain the same.’ 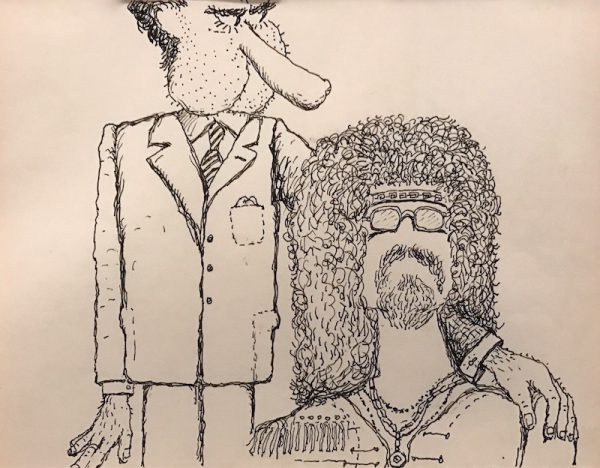 Nixon was inaugurated as president on January 20, 1969. Part of his platform was a desire to put an end to the Vietnam War, in which America was then entangled, with little or no hope of success. In 1973, he succeeded in pulling American forces out, signing the Paris Peace Accords at the beginning of that year. There was no reason then to think that his presidency would end in the ignominious fashion it did, though the scandal that sank him began as early as June 1972, when five men were caught breaking into the Washington headquarters of the Democratic Party, then in opposition. This happened shortly before Nixon was elected for a second term in November 1972, but the scandal continued to grow and reverberate, and he was forced to resign in August 1974.

Short as his time in office has been, many people already think that Trump may meet a similar fate.

Guston made his reputation as a pioneer abstractionist, and when he abandoned abstraction at the beginning of the 1970s, Hilton Kramer, critic of the New York Times, ridiculed him in a review entitled ‘A Mandarin Pretending to be a Stumblebum’. Guston said of the reception of his change of style: ‘It was as though I had left the church.’

His new lease of life as a highly original figurative painter is celebrated in the satirical drawings one sees in this show, which prefigure paintings that came a bit later, and make savage fun of a ruler whose career had not yet collapsed in disgrace. 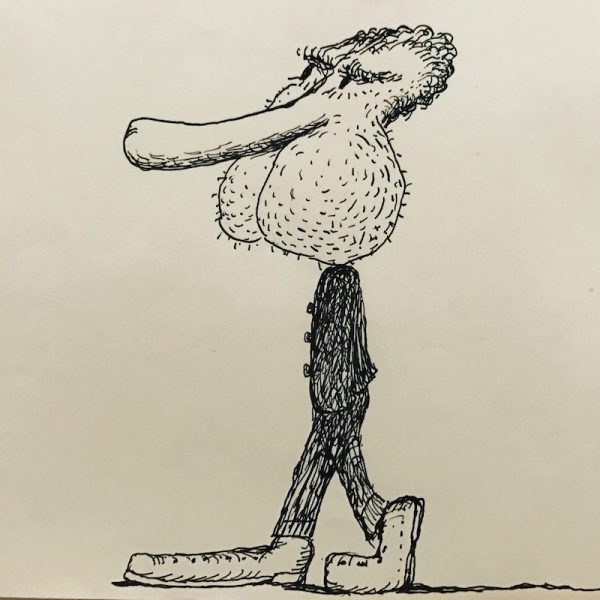 Guston uses the traditional weapons of the caricaturist – a mixture of exaggeration of physical characteristics and a reckless employment of visual metaphor. He pulls no punches. These drawings are as brutal – perhaps even more brutal – than those of his late 18th/ early 19th-century predecessor James Gillray. In addition to Nixon himself, a few additional characters appear – the Vice President Spiro K Agnew, also to fall foul of the law; Attorney General John N Mitchell, and Henry Kissinger, secretary of State and National Security Adviser. Kissinger is not portrayed as a physical being, but invariably manifests himself simply as a pair of horn-rimmed glasses, without a face to support them. A famous Kissinger quote is relevant here: ‘The illegal we do immediately; the unconstitutional takes a little longer.’

Nixon, famous for his five o’clock shadow, is portrayed as a walking, talking version of a penis and a pair of hairy testicles. In some drawings, the likeness is a tad disguised. In others, it is made brutally obvious. Whereas Gillray’s satirical prints were widely circulated, for a long time these drawings remained unpublished, even after Nixon’s fall. We like to think of our own age as liberal. The interval before these drawings were published or put on view offers proof that our own time is in many ways less liberated than epochs that have preceded it.

Two other points are worth making. One is the link between caricature and surrealist art. Long before the 20th-century Surrealist Movement, caricaturists specialised to producing images of things that could not exist in real life, but that immediately convinced viewers of their essential veracity. The other, quite simply, is that art does, in fact, feel a basic need to express ideas and opinions that venture outside the purely aesthetic. It does not, however, do so successfully if it preaches without humour, as so much supposedly avant-garde art does today. Guston’s drawings are visibly original – they express an original sensibility – but not at all avant-garde in any meaningful sense. You can trace them back to Pompeian graffiti. Or maybe back to some Palaeolithic cave, when a caveman felt impelled to tell his fellow tribesmen ‘Up yours!’