These paintings, created on unstretched linen, directly on the wall, were done at a time when the artist was a leading figure in American abstraction.  Like his Los Angeles high school companion, Jackson Pollack, Guston was widely exhibited and an important member, with Adolph Gottlieb, Clyfford Still, Mark Rothko and Willem De Kooning, of the New York school. In these works, Guston begins a search for solid forms and reintroduces a sense of object. In a series of work from 1964-65, blocky heads seem to emerge from underpainted ashen masses.  Who is the subject of the powerful “Portrait I” (1965) and is that a family depicted in “The Three’” (1964)?  The muddied half tones reverberate with introspection.  Shadowed by humanoid possiblities , these macho abstractions are a visualization of sixties cultural cacophony. 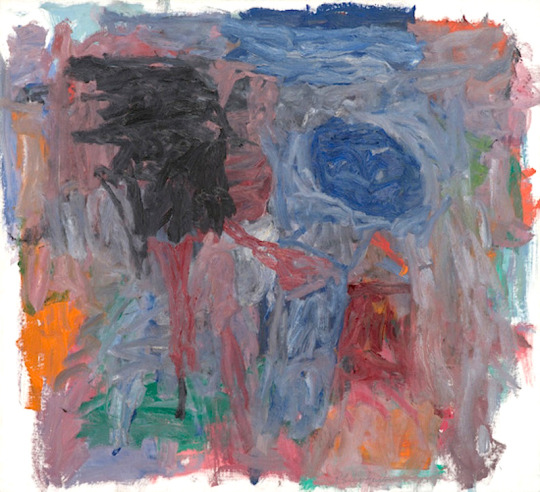 Untitled, 1962 Oil on canvas Kunstmuseum Winterthur, Purchase with funds from the lottery fund of the canton of Zurich 1993, inv. no.1565

Following Guston’s 1966 Jewish Museum survey, the artist turned to drawing and produced hundreds of  lyrically reduced works from 1966-67, that are known as his “pure” drawings. Presented in a grid, they are a magnificent coda to one of New York’s current and most monumental gallery shows.