Philip Pearlstein is one of the truly major figures in the history of 20th (and now 21st) century American art. He is now 93 years old, and still actively at work. His new show at Salon, Saatchi Gallery is entitled simply Philip Pearlstein: Paintings 1990-2017 and consists of just eight large canvases. It offers an opportunity to take a considered look at an artist whom for all his historical importance, has been surprisingly little seen here in Britain.

Pearlstein may now be a nonagenarian, but he remains, nevertheless, a wonderfully mischievous child – ELS

Pearlstein is sometimes associated with the Pop Art movement, due to the fact that, in the dim long ago, he once shared a studio with Andy Warhol who, like himself, was born in Pittsburgh.

In fact, he has almost nothing to do with the Pop sensibility, but a great many links to the tradition of American Realism. And maybe, even more, to do with the grandest traditions of European art. In a brief statement written for the catalogue that accompanies the Saatchi exhibition, Pearlstein declares: “As to developing a sense of three dimensions, I turned to the art of Piero della Francesca, who had been one of my heroes early on when I had studied the art of the Italian Renaissance.” He also mentions both Mondrian and Matisse as being among his exemplars. A formidable trio of heroes. 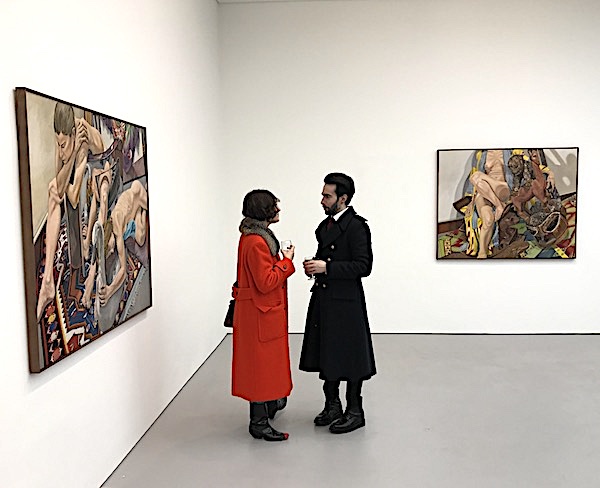 It may, therefore, come as something of a surprise when one realises that one of the keys to Pearlstein’s work, and one of the things that makes it so intensely pleasurable to look at, is its wonderful playfulness.

Essentially his big paintings are about the studio as a playground. There are nude models, always female, and an extraordinary array of objects. One painting, dated 2016, is entitled as follows: Two Models, Rooster Weather vane, Luna Park Lion and Blow Up Dinosaur. Another produced more than twenty years earlier, offers – once again – two models, plus a toy blimp on a stand, a miniature Michelin Man and what appears to be a swan decoy.

One of the things one gradually notices, studying these compositions, is the sophisticated nature of the cropping. It has been suggested, because of the way the images concentrate on the life of the studio, that Pearlstein’s paintings have a relationship to the work of Lucian Freud. In fact, despite the skill with which nude female bodies are depicted, they are very different in mood. This difference arises, above all from the skill with which the artist crops what is shown. Only rarely is a figure shown absolutely complete.

The cropping relates to a very specific aspect of the Modernist photographic tradition – an aspect that is also very American. I am referring to the early 20th century Photo-Secession Movement, and in particular to the work of Paul Strand.

Strand’s drastic cropping tends to refer to details of mechanical objects, or to architectural details – in the image called Porch Shadows, 1916, for instance. The device forces the spectator to imagine the rest of an object when just a part is presented to the eye. This, in turn, creates a dynamic, participatory situation. The observer can no longer be passive.

The same thing happens when you look at Pearlstein’s big paintings. You are not outside. You are precipitated into the scene. The artist’s choice of ancillary objects enhances the effect.

Pearlstein may now be a nonagenarian, but he remains, nevertheless, a wonderfully mischievous child.

SALON at Saatchi Gallery in Chelsea, London, has been created to present the work of leading international artists who have had limited exposure in the UK. This new venture directed by Philippa Adams, Senior Director of Saatchi Gallery, works in collaboration with galleries and artist’s estates, in selling exhibitions.