I remember, some time ago, a film in which a young interviewer asked Louise Bourgeois, then in her 90s, what it was like to become famous at her advanced age. The tiny, bird-like figure replied acerbically: “I ‘ave been ‘eer all along.” Phyllida Barlow has, also, been here all along. Teaching, making work, exhibiting. Her successes, the recent show at Hauser & Wirth, Somerset, a monumental installation at the Kiev Biennale, and now being chosen to represent the UK in Venice are not overnight flarings but won through hard and persistent work. That she is a woman artist of a certain age may have something to do with why her wider visibility has taken so long.

Walking up to the British Pavilion in the Giardini the visitor is met by a number of huge rock-like shapes impaled on posts. They might, simply, be playful constructs celebrating the use of raw arte povera materials and the process of their construction but they made me think of asteroids, something destructive that has come from afar and flattened us. I thought too, of Kurtz’s spiked heads set on poles in his sweating jungle; that potent symbol of colonialism from Conrad’s Heart of Darkness. Nearby the concrete holehoarding suggests a screen or hoarding. Below is a tangle of discarded objects: shoes, tyres and placards. What has happened here? A demonstration? Something worse?

Look on my Works, ye Mighty, and despair! Nothing beside remains. Round the decay Of that colossal Wreck, boundless and bare. The lone and level sands stretch far away.” Ozymandias: – PERCY BYSSHE SHELLEY

Moving further into the pavilion is a claustrophobic experience. The work is of a monumental scale yet the materials are flimsy and everyday: cardboard and concrete, wire netting and gaffer tape, off-cuts of wood that look as though they’ve been scrounged from a building site.  The great elephantine pillars, which reach from floor to ceiling, are hollow.  No more than empty shells. They evoke feelings of entropy and decline. Something mighty has surely fallen. Wandering around is like being an actor on a stage set of a rather disturbing play. There’s something apocalyptic about these huge, yet apparently, crumpling works, Like Joseph Beuys’ The End of the 20th Century they evoke both a sense of anxiety and despair. Is this a once great civilisation in decline or the cobbled together edifices of a dystopian outsider society? The dark greys used are reminiscent of those from a modern urban environment. Though the great henges are interrupted by bright coloured forms that appear to have been thrown up with whatever was to hand. 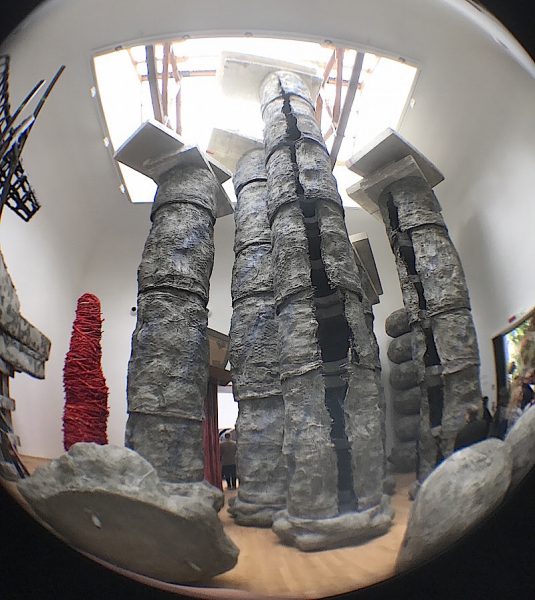 Walls are cobbled together with offcuts of hardboard and plywood like the fences erected to keep out intruders on dilapidated building sites. The squares of roughly painted colour not only evoke thoughts of formalism and the modernist grid in late 20th-century painting but also suggest the fragile structures of third-world shanty towns or those built temporarily in the Calais jungle.  A gnarled anvil sits on top of a stack of dismembered pianos. Is this the end of culture as we know it? Elsewhere a Juliet balcony wound with gaffer tap, seems an ironic reflection – positioned as it is looking out over the lagoon – of the grand Renaissance architecture of Venice itself. A city that is slowly declining and falling into the sea. The balcony suggests a space for looking out but it’s an unstable structure. Something of a chimera. There’s an implicit dialogue, here, suggested by the juxtaposition of these lumpy forms set within the formal neo-classical architecture of the pavilion. Doorways frame the coarse works suggesting a tension between the impoverished ‘developing’ world and the great civilisations of the past, between our European cultural history and its possible collapse. Civilisation and its discontents. 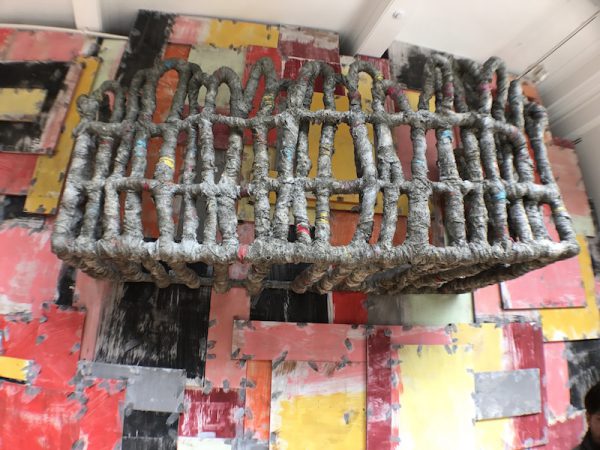 Trying to catch up with Phyllida on press day was like attempting to book an audience with the Queen. Even when we did find a quiet corner behind the press desk people started to queue to speak to her and shake her hand. But she was too polite to decline until I moved our chairs round so we could talk. She told me that for her the audience doesn’t exist while she is working in the studio and that she didn’t have a vision when she came to Venice last year after being selected to represent the UK. She feels it was brave of the British Council to choose her when she didn’t really know what she was going to do. And there was so much stuff to get to Venice. 92 crates. But debates surrounding the referendum were pervading everything that was going on at the time and she felt that Britain was on the edge of something terrible, teetering on the verge of catastrophe and chaos. That a great tragedy was looming. Although she sees herself as primarily an artist who engages with her materials and the processes of making, she admits to the unease that she was feeling during this period in the studio. At the time she could not have said what the work was ‘about’. In a sense it was only when it began to occupy the space in Venice that it began to come together as a whole, to create relationships both with the architecture and itself.

And how has Venice affected her?  Has it infiltrated her work? Well, it’s the faded palette and decaying grandeur that she loves, the peeling pink walls, the layers of grey-greens and browns, the deep blacks. And the title, Folly, I ask? Well, she sighs, it might refer to the foolhardiness of trying to make this sort of unsaleable work, to the project of being an artist at all. But it might also denote the hubris of human experience. It just seemed to be a very appropriate title.

Commissioned by the British Council.