Wow! This show is a real blockbuster! Spread out in the main exhibition galleries of the Royal Academy. It gives an excellent idea of who Picasso was, what he did, and why he is so centrally important to the story of Modern and Contemporary art.

Meticulously curated by Ann Dumas, Royal Academy, William Robinson, Cleveland Museum of Art and Emilia Philippot, Musée national Picasso-Paris, the exhibition mostly presents works on paper which range in size from big sock-you-in-the-eye compositions to tiny scraps which would have no value at all if they hadn’t been touched and transformed by the artist. Most of these scraps come from the Picasso Museum in Paris, as do most of the other exhibits. The artist, so it seems, was a real pack-rat, and never threw anything away. Not, that is, if he had previously altered its appearance in some fashion. 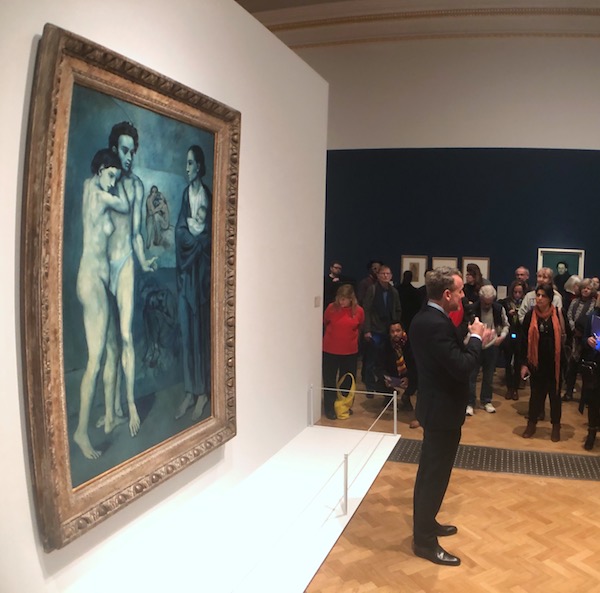 The sequence of displays begins, however, with a significant Blue Period composition entitled La Vie, dating from 1903. This is lent by the Cleveland Museum of Art, which is the RA’s partner in this exhibition. The work offers a reminder that the young Picasso, born in 1881 and in his early twenties when he produced it, started his career as an acolyte of the Europe-wide Symbolist Movement. If you look closely, there even seem to be faint traces of the influence of the British painter Edward Burne-Jones, who died in 1888. In the latter part of his career, Burne-Jones was well known in Europe, perhaps more so than any other British artist of his time. In fact, he perhaps had more influence internationally than any British artist has enjoyed since.

The exhibition then proceeds through all the phases of Picasso’s long creative life – The Rose Period, Cubism, Neo-Classicism, Surrealism (Picasso played quite a big role in the Surrealist Movement, while cannily remaining semi-detached). After that, there were the war years, mostly spent shut up in Occupied Paris, and his emergence as a culture-hero in the years after that. Picasso owed this, in part, to his major political canvas Guernica. Spirited away to America, this took on a different meaning to the one originally attached to it. It was read as a shout for freedom of expression in the arts, and a protest against fascist suppression of that freedom, not merely as a comment on the Spanish civil war.

Tactfully missing from the exhibition at the RA is any reference to the successor to Guernica: Les Massacrés de Corée, which dates from 1951. This ambitious painting was intended to be a condemnation of American intervention in the Korean War, not as a protest against the invasion of South Korea by the communist regime in the northern part of the Korean peninsula. Picasso had by this time, like many of the French intellectuals then surrounding him, formally assumed membership of the Communist Party. He had not dared to do so during the German occupation of France. 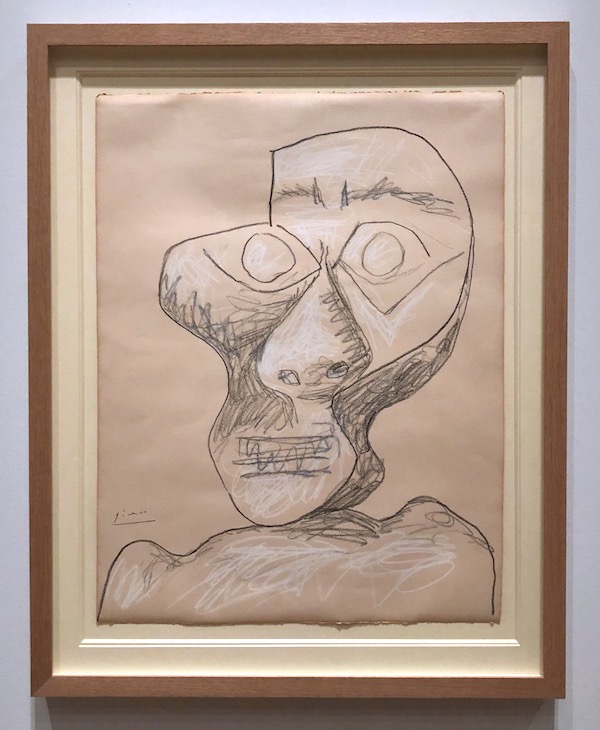 Les Massacrés is, like a number of Picasso’s later works, including many drawings and prints, a paraphrase of a famous work from the French 19th century – in this case from Courbet’s Death of Maximilian. Favourite subjects for this were the Women of Algiers by Delacroix and Manet’s Déjeuner sur l’herbe. Works in this category are in general well-represented in the latter part of the show now at the RA. Looking at these works, one can have no doubts, either about Picasso’s astonishing continuing energy as an artist, right up to his very last years, nor about his fertility of invention.

Nevertheless, some doubts creep in. Increasingly he is preoccupied with what happens or has happened, in the sphere of art, rather than with what is happening in the world around him, or in his own psyche. There are, however, exceptions to this. There are the successive muses-and-mistresses whose images manifest themselves in Picasso’s work: Dora Maar (the ‘weeping woman’ of the World War II years), Dora’s rival Marie-Thérèse Walter, Jacqueline Roque whom Picasso married in 1961. Two of these – Marie-Thérèse and Jacqueline – committed suicide. In drawings and prints, Picasso frequently assumes for himself the image of the legendary Minotaur, who killed and devoured the women who entered his labyrinth. In his case, there was no intrusive Theseus, ready to rescue them.

What one sees, I think, in these later works, is a narrative about the way in which the Modern Movement, within which Picasso is such a central, transformative figure, was already running out of steam. Picasso achieved world-wide celebrity, and struggle as he might, it began to stifle him. The Minotaur had nowhere to go, outside the labyrinth of his own creation.