The full re-opening of the Victoria & Albert Museum’s Cast Courts occurs at an apposite moment. It’s apposite not only because of the rise to respectability of what is now called Appropriation – that is of situations where direct copies of work by some other hand are presented by some contemporary master (or mistress) as his (or her) own, with the justification that this is perfectly fine because of a change of context. A Warhol not by Warhol takes on a different meaning when it is produced by a person of a different gender.

Debotah Cass, known for appropriating Warhol, justifies her activity as follows: “I’ve had the appropriation urge for a long time. It’s who I am.” And what she does is duly reported on Wikipedia as a “feminist project meant to insert a female voice into the macho, male-dominated contemporary art world.”

The complication this leaves out id the fact that Warhol’s Marilyns, appropriated by Kass, were themselves the product of appropriation. The iconic image they offer is not from s photograph taken by Warhol himself. It’s doubtful if the artist ever met his subject. He only started to make these paintings immediately after Marilyn Monroe’s death. 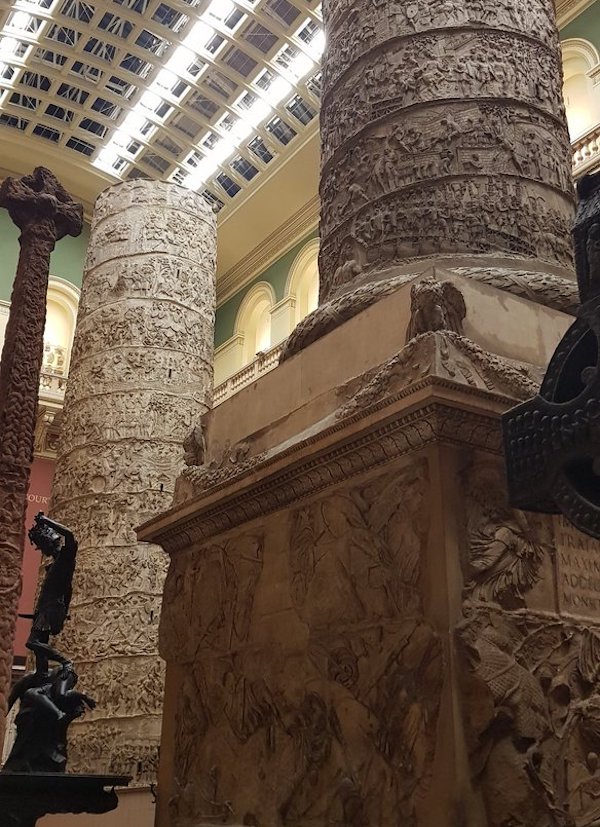 It is also known that many images of this type were in fact manufactured when Warhol, chief figure in what came to be called The Factory, may not have been physically present, though he did oversee the process.

The Cast Courts, as they now exist, are not comprised simply of casts from celebrated works of sculpture from a wide range of locations, also from quite a spread of dates. Other processes were involved. What is on view is far being entirely comprised of sculptures. There are, for example, stunningly exact electrotypes of various masterpieces of metalwork.

The display in the Cast Courts sometimes invites you to do things that are verboten in other parts of the museum. For example, to touch some of the items on display. Touching may sully their surfaces, but the cast in question can, in fact, be easily replaced, good as new. The idea that works of art are inherently precious is thus subtly challenged. It’s the idea that counts, not the actual physical embodiment.

And the somewhat cluttered nature of the display, as opposed to what prevails in other parts of the V&A, also gives a different vibe to the contents of these galleries. For example, you will at one point stumble upon a row of sizeable recumbent tomb figures, all lying side by side. Jammed together in a way that would never happen, even in the most overcrowded church. ‘Compare and contrast,’ the display seems to tell you, ‘you’re basically looking at a product line: which variant do you prefer?’ It’s like looking at a row of high-end glossy sportscars at a motor show – the sort of commercial event where the space occupied is even more precious and expensive than the actual products on offer.’

These Cast Courts, one of the very few displays of this kind now surviving in more or less its original state in a significant museum, have taken on a bizarrely contemporary vibe.

Essentially the Courts came into being to educate a mass public that didn’t have today’s opportunities for travel.

Coincidentally, or maybe not, this happened at a time which witnessed the rise of increasingly mechanised mass production. The narrow idea of originality in art – i.e. ‘all made by hand by one supremely gifted individual’ – certainly existed in Victorian society, inherited not from the remote past, nor even wholly from the Renaissance, but mostly from the Romantic Movement. This idea overlapped and struggled with its apparent opposite, the Industrial Revolution, parent of mass production. The late 19th century Arts and Crafts Movement is witness to the divide.

In the end, as these inherited displays at the V&A tell one, the Industrial Revolution won. It’s the thought that counts, not the actual embodiment, however sentimental one may like to be about the uniqueness of the latter. Now, in the post-Industrial age, concepts are what counts. ‘Virtual’ is rapidly taking the pace of ‘original’. In that sense, the Cast Courts are, though apparently deeply Victorian, also profoundly prophetic.