The hosannas are already ringing out for Tate Britain’s new show Queer British Art, 1861-1967. This, for example, is how Adrian Searle began his review in The Guardian: ‘Weaving between history and gossip, private lives and public declarations, repression and celebration, the exhibition Queer British Art recounts a complicated story of sexuality and desire through work that is as often as coded and veiled as it is candid and outspoken.’ The review in The Times is scarcely less enthusiastic. To which I can only retort ‘Sorry, folks, I don’t get it.’ I’m speaking here as a gay man who lived through a considerable chunk of the period the exhibition attempts to cover.

“Queerdom, then as now, has always been international. In fact, you might almost describe it as being a nation in itself” – ELS

1861 is the starting point of the exhibition because that was the date when the death penalty for sodomy was abolished in Britain. In 1957, after the Wolfenden Report, the legal penalties for male homosexuality began to be lifted. Not coincidentally, this was the moment when, already in my mid-thirties, I finally admitted – at least to myself – that I was homosexual, and that, furthermore, nothing could be done to change it.

I had, of course, had some homosexual experiences before that time, though none at boarding school and remarkably few in other settings. Chief among them was a reluctant sexual encounter, in my early twenties, with my second cousin, the celebrated male ballet dancer Anton Dolin. Pat Dolin, as he was known, had been a star of the international Ballets Russes, and the lover of Serge Diaghilev. In that sense at least, I can count myself as being a member of a kind of gay canonical succession. I was stupid enough, after running back home from Brighton, where the encounter took place, to try telling my mother, Dolin’s first cousin, about my feelings of upset. She didn’t want to know. In a way, this typifies what the Tate Britain show is about, though this is not its stated intention.

Dolin is not mentioned in the catalogue of the show, though it does include a not very revealing, either physical or psychological, image of another male dancer, Robert Helpmann, an Australian by birth also eventually knighted.  Queerdom, then as now, has always been international. In fact, you might almost describe it as being a nation in itself. Pat Dolin, like Francis Bacon, was of Irish origin but was born in Sussex. He was a major star in the ballet world throughout his career – principal at the Vic-Wells Ballet post-Diaghilev, then founder of the Royal Festival Ballet. He too got a knighthood. In a sense, Pat’s whole career was emblematic of what it took to be a successful homosexual in the society of his time. Push hard, build an international network, and (though everyone more or less knows) don’t get found out. Or anyway, not in public. 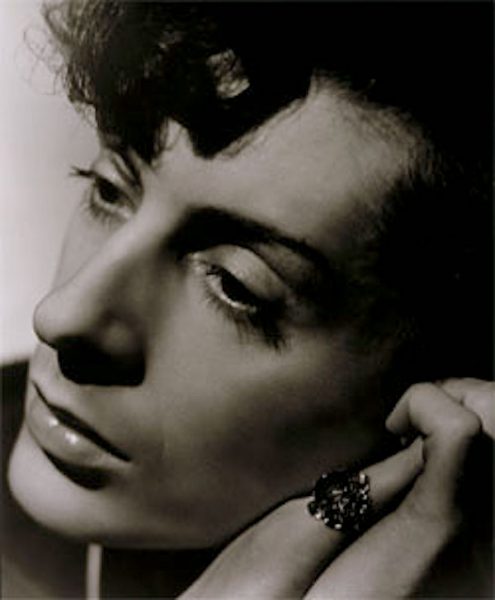 The Tate Britain catalogue offers apparently unintended clues to the unsatisfactory nature of the show. The cover image, in colour, sternly masculine, is the lesbian painter Gluck. The subordinate back cover uses a black-and-white photo by Angus McBean of the supremely camp Quentin Crisp, sporting a big ring and fluttering eyelashes. If you weren’t told who the subject is, you’d never guess that the image represents a male.

The frontispiece to the catalogue is of something not prominent in the exhibition (indeed I didn’t find it there) – a litho by John Minton of a member of the Royal Horseguards at ease in the squadron dressing rooms, his ceremonial kit spread out around him. You have to look carefully through the rest of the text to see why the image is present. On a page a long way in, facing a still from the 1961 film Victim, the catalogue notes that in this print Minton ‘tacitly referenced a long tradition of their [the other ranks in the horseguards] availability for ready cash.’ Minton, one of the leading queer painters of his time, isn’t otherwise represented in the show. While for practising male homosexuals during the period under review there was the ever- present possibility of disgrace and total social and economic catastrophe, yet being gay, as Minton’s print slyly indicates, did offer certain freedoms in exchange. Gay men could travel up and down the still rigid social scale, in a way unavailable to straights. It was also much easier – a point the show does rather timidly make – to jump over racial barriers.

As the cover image by Gluck suggests, a great deal of the show is given up to showcasing the work of lesbians, or sometimes lesbian, artists rather than that of male homosexuals. This is in step with present sensitivities about gender equality. What it tends to ignore are two things. First, that the situation of lesbians or sometimes lesbians in the British society of the time was entirely different from that of their male colleagues. They might get mocked, or gossiped about, but they weren’t in any danger of going to jail. They also had much less freedom of social manoeuvre. This tends to mean that the work itself lacks a certain edge. 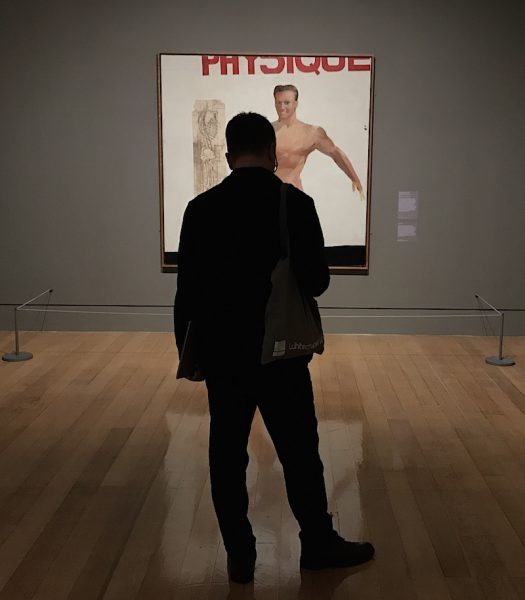 Secondly – and I’m probably going to get into trouble here – the fact is that the work of these lesbian choices doesn’t have much spark. A picture by Ethel Sands called Tea with Sickert (c.1911-1912), with the artist’s partner Nan Hope seated with her back to us in the foreground? The Westminster Gazette called it ‘a daring picture’ when it was first exhibited in 1912, but it looks pretty tame now. Tamer still is a conventional still life by the more-or-less forgotten Claire Atwood (1866-1962), entitled John Gielgud’s Room. Tellingly there’s no image in the show of the great actor himself, yet another ‘queer sir’, who ranked as one of the great closet cases of his time. He was universally known to be gay but deeply reluctant ever to come out, even after an unfortunate conviction for ‘cottaging’ – looking for sex in a public lavatory.

The exhibition attempts to end with a bang, with a gallery devoted to Bacon and Hockney, currently the most resonant names in British contemporary art. Neither of them is shown at anything like his best. If you want better Hockney, just go upstairs and see his big retrospective show. In this context, there is, however, no denying that both artists are inconveniently of the male gender. Top ranking lesbian equivalents may exist, hidden away, but Tate hasn’t found them.