Rachel Howard (b. 1969 in County Durham) is a rising star in the British art world, which is currently badly in need of new names.

Though she isn’t exactly a spring chicken, (she’s in her late forties), she’s quite a bit younger than the current crop of ‘emerging, mid-career artists’ who have recently been making a splash in public spaces. One of the things she does have in common with them is the gender factor. She is on the scene when there is a big push for more recognition to be given to women artists. But I don’t think one can see her as being in any sense a token figure. If there is a truly significant aspect of her success, it is not that she is female, but that she is unabashedly a painter. These works belong to a tradition that has been ongoing in art, at least since the appearance of the Abstract Expressionists. 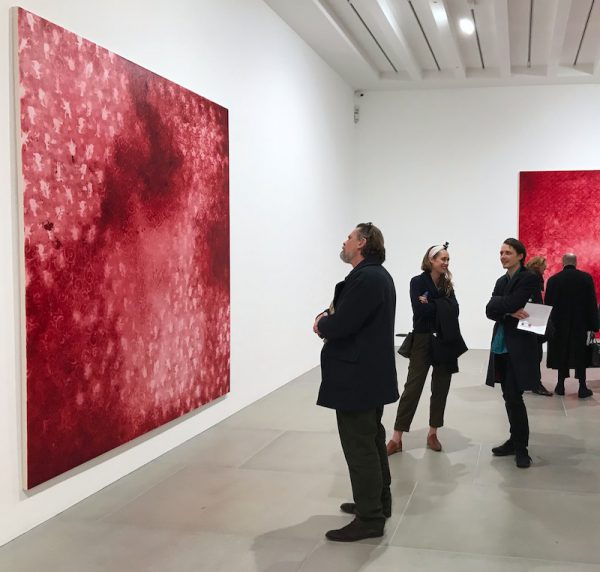 Currently, Howard has solo shows in two different London galleries. One is at Blain|Southern, until 17th March. It is entitled simply, Der Kuss. Another is at the Newport Street Gallery until 28th May – Repetition is Truth: Via Dolorosa. She is also included in the Imperial War Museum’s current show – Age of Terror: Art since 9/11 (until 28th May). Meanwhile, in the United States, she has a solo at MASS MoCA in Massachusetts which runs until 2nd February 2019. MASS MoCA’s vast expanse currently offers all sorts of very famous American names – Laurie Anderson, Louise Bourgeois, Jenny Holzer, James Turrell, Robert Rauschenberg, And just one other Brit: Anish Kapoor.

Howard’s work hovers between the figurative and the abstract, with the emphasis more on the second of these two adjectives. I have to say that, the bigger her canvases are, the more I tend to like them. The Blain Southern show features some moderately sized works that are as near as dammit to being entirely black-and-white. These may fit in well with what the press release tells one, that they: ‘Explore the fragility of the human condition and the complexity of the emotional spectrum, from suicide and mental illness to joy and sensuality.’

Imperfect being that I am, my reaction to this kind of vaguely aspirational statement tends to be: ‘I believe you, dear – thousands wouldn’t.’

I did, on the other hand, enjoy the group of big red canvases that seem to have given the show its title – Der Kuss. They leave one in some doubt as to who or what is kissing whom or which. Look at them, or, more exactly, into or beyond the painted surfaces, and you seem to see swarming natural forms.

A similar effect is present in the sequence of yellow-and-black, or sometimes purely yellow paintings that make up the show at the Newport Street Gallery. The series, commissioned by Damien Hirst was inspired by the treatment of prisoners at the Abu Ghraib Prison. One prisoner Ali Shallal al-Qaisi is seen hooded standing on a box with wires protruding from his hands and genitals. This theme is repeated again throughout the exhibition.

Here the series title gives one a sharp push: Repetition is Truth – Via Dolorosa. In this case, one empathises with the task the artist has set herself – that of repeating and repeating until the right solution is found. And then there is the religious echo: the suggestion that the search for an artistic solution is the equivalent of Christian martyrdom.

Howard is not entirely divorced from today’s thrust towards a more moralistic, or at any rate moralising kind of art, as her inclusion in the Imperial War Museum’s Age of Terror show tends to confirm.