The Chapel at the Yorkshire Sculpture Park is a unique gallery space that was originally used by those privileged to inhabit the Bretton Estate. Named St Bartholomew’s, it was built in 1744 and, since its refurbishment was completed in 2014, is open for everyone as a contemplative space. This space was of particular interest to Rachel Kneebone who says, “I am excited and delighted to be showing 399 Days in the YSP Chapel, a space that resonates in a special way with my work, from the wooden panels of the interior which echo its panelled structure, to the bucolic exterior and landscape, which accentuate its organic forms.”

399 Days, named after the time it took to make, is the artist’s most ambitious sculpture to date

Over five metres in height and comprising 63 exterior panels, it echoes historic sculptures such as Trajan’s Column, a plaster cast of which is displayed in the sculpture court of the V&A, where 399 Days was also shown from 2017-2019. 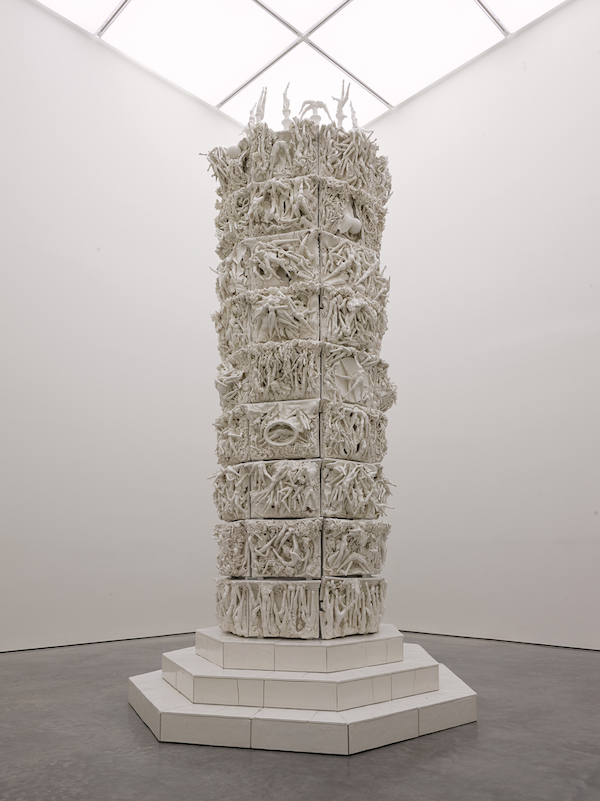 399 Days has been constructed using a composite approach whereby sculpted ‘units’ – the exterior panels – combine to form one grand architectural structure. While monumental in scale yet, through this transformative process, 399 Days is exquisite in detail, with those details becoming ever more magnified and visceral.

Kneebone’s sculptures convey movement and metamorphosis through the stillness of porcelain, a medium usually associated with calm rather than fluidity. She explains that “My work moves around metamorphosis, change and simultaneous states, so nothing about it is fixed.” She does not depict the full human form but alludes to the body through a mass of legs – fragments of bodies which multiply, merge and cascade down appearing to be in motion – unfurling around a complex tableau of organic and geometric forms such as flowers and orbs. Her intricate work unravels human experience addressing and questioning the human condition: renewal, transformation, intense emotion, life cycles and the experience of inhabiting the body. This piece, like the Chapel in which it is set, enables a moment for pause and reflection on the relation between strength and vulnerability and the capacity of the human spirit to create, even in adversity.

The contemplative space of the Chapel allows for another view of 399 Days at height from the balcony. Here, drawings from the artist’s Ovid in Exile (2016) series show different aspects of her practice as well as the relationship between works on paper and sculpture. The series refers to the famous Roman poet Ovid who was banished from Rome in 8 CE, for reasons that have become shrouded in mystery and supposition. Kneebone was drawn to the episode as an insight into the human condition, the creative and destructive impulses.

New sculptures, where motifs such as tendrils, folds, ribbons, and spheres are fluidly interwoven, create a vine-like structure that protrudes from the wall. The sculpture Roll (2017) is shown in the dark-wood panelled vestry. The energetic, organic elements of the sculpture suggest both movement and resistance, amplified by its confined space and in contrast to its static and apparently decaying pedestal. Its tomb-like form and ornate growth resonate with the Chapel as a place that historically marked key life events from the cradle to the grave.

Kneebone also has an exhibition at White Cube Masons Yard which is titled after French Romanticist Théodore Géricault’s monumental painting The Raft of the Medusa (1818 – 1819), depicting survivors and bodies adrift at sea. As another of her intricate compositions which address the human condition, Raft explores the arc of human life – birth, growth, and death – and the accompanying hope and despair.

Marking a departure in her practice, this exhibition is the first time she has presented sculptures off the base, as in works such as Quill (2021); a sculptural relief featuring winding, elongated tendrils installed directly onto a deep blue wall. Exemplifying her concerns with motion, lightness and transformation, a new work Shell (2020) hangs suspended from the ceiling.

Also on display are sculptures from the artist’s Raft of the Medusa series (2015), whilst works on paper echo the forms of Edgar Degas’s Young Spartans Exercising from 1860, the latter of which is currently on display at The National Gallery, London.

Clay, and its more refined form of porcelain, have been used for thousands of years to make objects for the home and for display. Primarily working in porcelain, Kneebone has developed her own unique form of sculpture by exploiting the properties and boundaries of the material accepting and appreciating the unpredictable nature of her chosen material and the firing process, deliberately allowing her work to rupture and crack. As a result, she can, to quote Ali Smith, ‘make forms and simultaneously unmake them.’ Her forms meet, melt, fracture, and fuse. As Darian Leader has said of 399 Days there is ‘the offer of a whole, complete form’ which is continually being undermined. Kneebone’s works enact a dissolving of meaning and use complex forms to express formlessness.