The Gagosian Gallery on Grosvenor Hill is a quietly present, subtly magnificent slab of grey, and inside there are several large top-lit galleries. The building has managed to create the atmosphere that is most conducive to looking at art: we are both receptive to awe, wonder, notions of the special and outstanding, and also comfortable, neither intimidated nor patronised. This is particularly appropriate for the art of Rachel Whiteread.

Her work is determined to make us see the overlooked and the invisible. Her subjects are the disregarded, the overlooked, the quotidian. She has cast a piece of cardboard in bronze, dolls’ house furniture in polystyrene. She is best known for House, the cast – literally – of the inside space of a small typical urban house, two-floored, modest. Coloured white, and for all its solidity curiously ghost-like, it existed as an installation in East London for six weeks. That was the contract between artist and local authority, and it was adhered to, despite petitions and articles saying it should be longer. Longer would have meant taking it for granted, perhaps covering it in graffiti; now it lingers in the memory and in publications detailing its past existence. 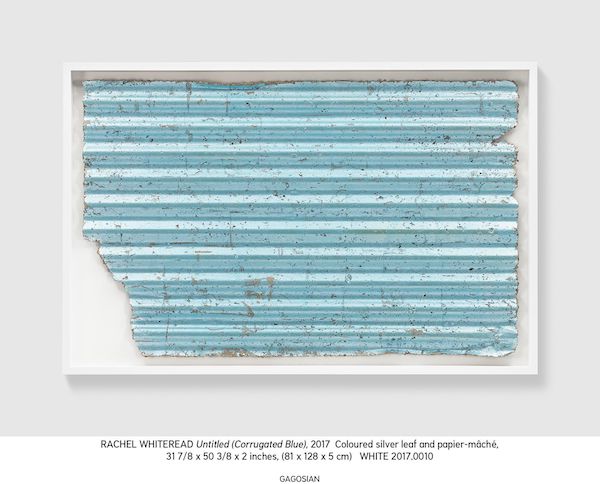 Rachel Whiteread’s extensive art practice has usually been built on the premise of reacting to found objects. She has seized the real world and responded to it – whether it be the empty spaces delineated by chairs, copying and reversing the form of the empty plinth on Trafalgar Square, something as mundane and quotidian as mattresses, pieces of cardboard boxes, staircases. Her Holocaust Memorial in Judenplatz, Vienna (2000) takes the form of books, cast in concrete, the pages turned towards us, and thus spines bearing titles forever invisible, and of course all forever unread. Typical of her imaginative, exhilarating and surprising appropriations is the print she made for the 2012 Olympics, a controlled swirl in Olympic colours of overlapping rings. Rings were the official emblems of the Olympics, their visual branding but also, as has been suggested, typical of the round marks left on tables by drinking glasses.

The current beguiling exhibition is somewhat of a departure. There are two central constructions, airy huts or sheds, the remnants of what seem to be benign explosions, made of found materials – wood, branches, corrugated iron among the list – and painted white. One is called Poltergeist, a mischievous ghost, responsible for noise and unexpected movement, and sometimes destruction, and chaos; the other Doppelganger, meeting an unexpected double. The supernatural ethos hinted at so lightly here is contradicted by the sheer elaborate bounce of the disparate parts caught in an elaborate yet seemingly spontaneous concatenation of individual parts brought together to suggest something once whole and now fragmented yet still held within the original framework. These appear to be made up compositions rather than riffs on found objects, although the materials are all found, what appear to be tree branches – beech, pine, oak – and pieces of corrugated iron.

Explosions and rearrangements are almost a contemporary trope, and it is fascinating to see the range of visual moods that are possible. Rachel Whiteread’s take here is almost diametrically opposite to Cornelia Parker’s 1991 exploded garden shed, which was an actual shed she arranged to have blown up and then titled Cold Dark Matter, arranging the salvaged remains as though in mid explosion. Despite her somewhat edgy titles. Whiteread’s pair of invented explosions are relatively settled benign ruins curiously euphoric. 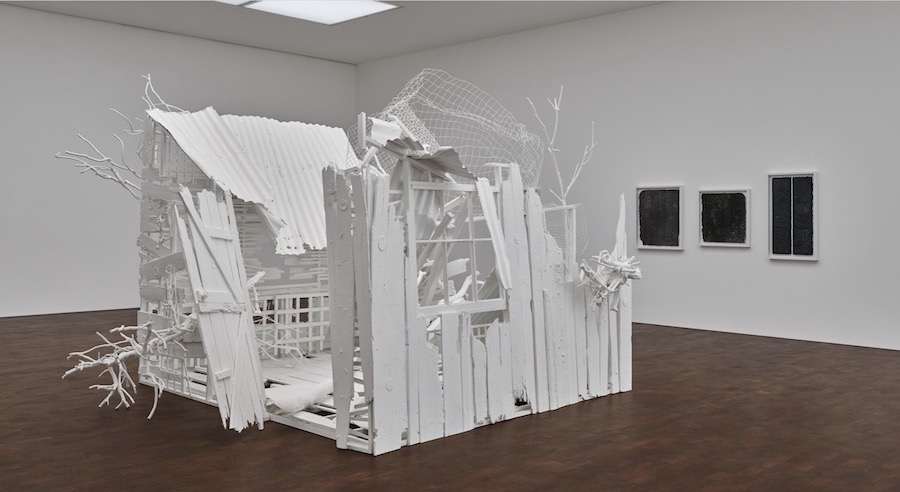 Wall hanging pieces include painted bronzes, which look like casts of various kinds of cardboard packaging, scraps of what once must have been functional boxes and containers. Yet others are made of papier-maché, although in Whiteread’s continual play on trompe l’oeil, they look like pieces of corrugated, rippled iron. These are painted and coated in coloured silver leaf: a rather radiant red, a cerulean blue. Others are in coloured resins or paint, sometimes on steel, sometimes on bronze. There is also a group of eight paintings on paper: white swirls of acrylic and ink on a black background. These are exhilarating abstract dances, exuberant and euphoric. Having one to look at would easily be a kind of permanent visual anti-depressant; these are fleet-footed choreographed abstracts in asymmetrical rhythms.

The whole is a delightful amalgam: perfectly ordinary things, bits of rubbish, one-roomed structures in disarray, suggestive of the day to day in decay, stuff that might be lying about in a scruffy builders yard, recomposed into art: the disregarded regarded. The fragments imply something that was once whole, but they seem souvenirs of a natural rather than a catastrophic process, a quiet falling apart over time rather than a destructive event. These three-dimensional remnants are curiously dignified and benign.

Now we can all go out, and here as a reward, a real treat awaits.