One telling feature of the show of Raphael drawings now at the Ashmolean Museum in Oxford is its timing. The show opened on June 1st and closes on 3rd September. The Trinity (Summer) Term at the University of Oxford ended on 17th June, at which point, presumably, the majority of the students resident at the various Oxford colleges dispersed on their holidays. The Michaelmas (Autumn) Term does not begin until 8th October. Though the Ashmolean is very much a university institution one can, therefore, be sure that this major event is not primarily addressed to the resident student audience. The Ashmolean, for this exhibition at least, clearly had to wish to be ‘down with the kids’, after the manner of a number of recent events at Tate Modern.

A visit to the show, early in its run, but after Trinity Term had ended, confirmed that it is indeed well visited (booking in advance is essential) but the audience was very much of mature years. In fact, looking around the galleries, it was hard to spot anyone who seemed to be below the age of sixty. This indicates an increasing split in the audience for the visual arts. What the museum was aiming for with this event is the not-too-skint retiree tourist pound or dollar. Which was exactly what it seems to be getting. 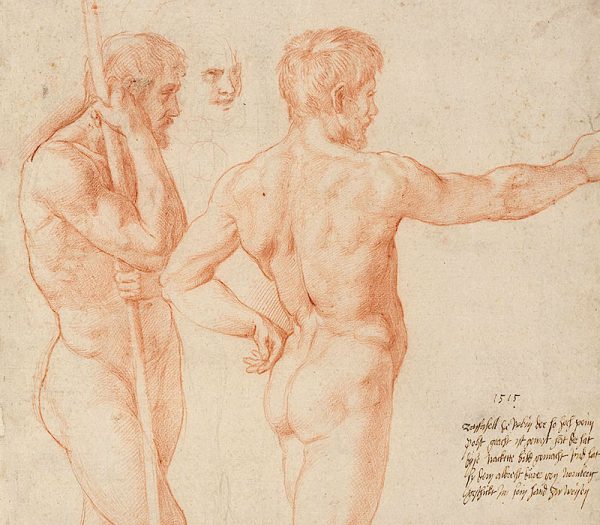 The display, taken on its own terms, could hardly be faulted. Unlike the Leonardo da Vinci show held at the National Gallery just a few years ago, it wasn’t a frustrating pain to visit. Displays of drawings by famous Old Masters and the mass audience tend to be ill-assorted. The drawings are small – sometimes, in fact, tiny – and the lighting has to be kept low for conservation reasons. The layout of the Raphael show is designed to minimises these inconveniences. You still have to have your nose more or less pressed to the wall to see what you are being offered, but there is a steady flow round the galleries, the number admitted has been carefully calculated so that you are in no danger of being brusquely elbowed aside, and the texts on the wall, designed to pick out salient historical and stylistic points are well spaced and cogently written.

The fascination of the exhibition is threefold. In the first place, it very amply demonstrates the wide variety of different drawing techniques used by Raphael, and how these were chosen to match a whole spectrum of different artistic purposes. The means used, from stylus, to pen-and-ink, to chalk, changes as an idea is moved along and developed. Secondly, there was drawing as a vehicle for eloquence, comparable to the modes of traditional oratory. As a catalogue essay by Catherine Whistler remarks, “Raphael’s awareness of drawing as a virtuoso, even oratorical performance emerges in many works where the expressive or visual impact goes far beyond the requirements of the final painting.”

Thirdly, one is forced to realise how crude the modern cult of ‘appropriation’ is made to look by what one sees here. Raphael traditionally ranks as one of the great trio of Italian High Renaissance artists – Leonardo, Michelangelo, Raphael – who stand at the very centre of the story of the development of European culture. He was the youngest of the three. Leonardo was born in 1452, Michelangelo in 1475, Raphael in 1483. He stole ideas from both these seniors. In fact, he seems to have stolen prolifically as well from lesser contemporaries. What counts is less his power actually to invent, as to summarise, vary and re-use. And, despite Michelangelo’s achievement in the Sistine Chapel, Raphael was the most efficient of the three in getting things done. Michelangelo’s botched statues speak about his frequent inability to carry things through to a conclusion, as do Leonardo’s many failed projects. Leonardo died in 1519, Michelangelo not till 1564. Dying in 1520, just over a month after Leonardo, Raphael left a much greater legacy of completed works behind him.

Raphael The Drawings The Ashmolean Museum Oxford Until 3 September 2017