Raphael’s brief career shaped the course of Western culture like no other artist; this was so whether his work was affirmed or his influence rejected.

Joshua Reynolds made a case for affirmation in his ‘Seven Discourses on Art’: “The excellence of this extraordinary man lay in the propriety, beauty and majesty of his characters, the judicious contrivance of his composition, his correctness of drawing, purity of taste, and skilful accommodation of other men’s conceptions to his purposes.” In essence, Raphael gives us quintessential images of beauty and civilisation which are characterised by serenity and harmony. As a result, Reynolds argues that “the arts receive their perfection from an ideal beauty, superior to what is to be found in individual nature.”

John Ruskin and the Pre-Raphaelite Brotherhood reacted against this idea of an ideal beauty with a perfection not found in nature. Ruskin wrote of Raphael’s frescoes of 1509-11 in the Stanza della Segnatura in the Vatican, “The perfection of execution and the beauty of feature which were attained in these works and in those of his greatest contemporaries, rendered finish of execution and beauty of form the chief objects of all artists; and henceforward execution was looked for rather than thought, and beauty rather than veracity.”

While highlighting the apparently effortless beauty, purity and harmony of Raphael’s work that has ensured continuous admiration for his art over the centuries, this exhibition argues that the debates over the perfection and beauty of Raphael’s paintings have obscured the extent to which he was a Renaissance man in and through the range of his interests and activities. Working across a wide range of media, with a practice underpinned by his exceptional skills as a draughtsman, Raphael produced major paintings in oil and fresco. He created designs for prints, tapestries, mosaics, decorative art, stage sets, applied art and sculpture. A gifted architect, he was also an early archaeologist, and a poet.

This is the first exhibition outside Italy to encompass all aspects of his artistic activity across his career. As such, it provides evidence of Raphael’s extraordinary energy and drive as an entrepreneur, enthusiasm for collaboration, including his large workshop, and dexterity in negotiating the often-treacherous waters of ecclesiastical, princely and papal patronage; all of which led to phenomenal success and to his early death, if, as Matthias Wivel suggests in the catalogue, his crushing workload compromised him physically.

The exhibition begins with evidence of his prodigious talent, as seen in his early works before shifting focus to work produced in Florence, where he was to find a new network of clients and produce work for many other locations. Once in Rome, he gained the patronage of the Sienese banker, Agostino Chigi. It is from this point on that the range of his work begins to be seen, beginning with designs for chapels in Santa Maria della Pace and Santa Maria del Popolo plus bronze roundels from Santa Maria della Pace attributed to Cesarino Rossetti after designs by Raphael. From this point onwards, the range of media in use and on show broadens exponentially, from frescoes for Pope Julius II’s private apartments to original print designs engraved by Marcantonio Raimondi, a survey of ancient Rome with drawings of its principal buildings, and designs for private townhouses and tapestries. His ground-breaking work as a designer for tapestries is represented by Saint Paul Preaching at Athens from the Workshop of, or on behalf of, Pieter van Aelst, after a design by Raphael. Images of the Madonna and Child and portraits are accorded particular focus from among the many paintings, while the stars of the show are undoubtedly the drawings displayed throughout, as these display energies and emotions that are much deeper and more varied than the serene equanimity of the paintings. 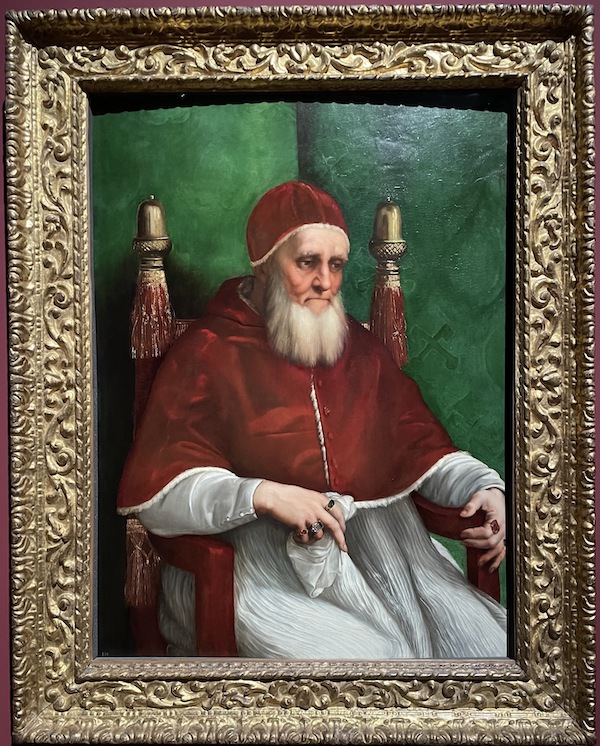 Ultimately, Raphael offers us a positive vision of the beauty and serenity of humanity while showing us people that thrive in collaboration and community. He, too, thrived in a similar manner valuing friendship and humanity, having the ability to work with a range of patrons and to gather a team and point them in the right direction. ‘The Tempi Madonna’ celebrates the deeply human bliss of a mother in the company of her new baby. ‘Portrait of Pope Julius II’ uncompromisingly shares the frailty of Julius’s final years, while ‘Self-Portrait with Giulio Romano’, a double portrait with his friend and pupil combines a degree of formality and distance with exceptional tenderness and humanity.

It is Raphael’s paintings and drawings that mark him out as a genius and which demonstrate why he plays such a pivotal role in the history of Western art. However, by focusing on the range of his work and commitments, this exhibition provides us with a much fuller and deeper picture of the artist and person Raphael was; one who is a Renaissance man alongside Leonardo and Michelangelo and one whose qualities were such that, on his death, he was compared to Christ. Shaped as we all are – however isolated and individual, we might become – by our relationships with others, it was his experience of friendship and humanity that, combined with his natural talent, enabled him to create a vision of all that humanity could become.

While being predominantly a vision of harmony, serenity, and beauty, meaning that the critique of Ruskin cannot simply be dismissed, sufficient of the energy and emotion which is found more readily in the drawings seeps into his paintings to ensure they combine execution and thought; beauty and veracity. In this way, he captures in his art, the human and the divine, love, friendship, learning, and power. This year in Holy Week and Eastertide, given the degree of turmoil, conflict and anxiety to be found within our world, we could do far worse than to immerse ourselves in Raphael’s vision of all we can potentially become, and be inspired.