Just as I had begun to despair of the future of video, or of video + installation, as mediums for genuinely convincing contemporary art, two major examples arrived to change my mind. One was the video by the Maori artist Lisa Reihana that forms part of the Oceania exhibition at the Royal Academy. The other is this, at Firstsite in Colchester.

It is the work of a Delhi-based group, Raqs Media Collective, and is entitled Not Yet at Ease. (See Top Photo)  It forms part of the commemoration of World War I, viewed from a different angle from what has been offered so far on this theme here in Britain. As a press release tells one: ‘Not Yet At Ease explores the history of psychological disorders resulting from conflict and the stigmas attached to them… Raqs Media Collective have based this new work on their theory that the symptoms of ‘shell shock’ were first observed by military censors, who noticed a tendency among some Indian soldiers to break out spontaneously into ‘poetry’ in the letters they wrote from battlefields, barracks and hospitals. Not Yet At Ease gives voice to these words.’ And, one might add, offers deeply moving images as well

All this may sound daunting, still more so because the visitor is led on a winding path into a very large installation. As one proceeds, one looks through horizontal slots in what may be padded doors, as if one was making one’s way through an institution where mental patients are confined. What one sees through those slots are the dreams and fears of men who were thrown into a conflict that was a long way from their own native territory, and an equally long way from the culture that originally nurtured them.

The great advantage is that the visitor can experience this at his or her own pace. Also, that you needn’t, if you don’t want to, adhere to any fixed narrative sequence. The experience is very different from the ‘Sit there a pay attention to nanny’ currently exemplified by the Turner Prize videos currently on offer at Tate Britain. The Tate videos, first to last, will take you five hours, However, if you are based in London, you could, with a bit of luck, catch a train to Colchester, get yourself to First Site, see Not Yet at Ease, and get yourself home within about the same length of time.

Sorry folks, I’m in no doubt which of these I’d rather do. A trip to Colchester every time. Even if, as happened in my case, British Rail Sunday services were fucked up, and the trip was first the train, then quite a long stretch on a bus.

The images I saw were not only moving in themselves but thought-provokingly mysterious. As well as adding something new to the well-worn story of the war, they offered a ticket of admission to a different mindset. Not many works of art, contemporary or other, are guaranteed to do that. 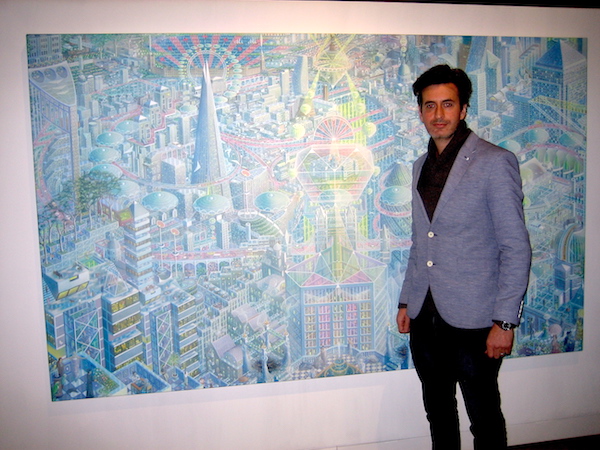 Every now and then a show comes along that knocks one’s preconceptions sideways, One such is an exhibition called Meridian Skylines by the Brazilian artist Caio Locke, now just about to close at the gallery of the Brazilian Embassy in London, in Cockspur Street off Trafalgar Square, but re-opening till 30th November, with viewings by appointment, at HKS Architects, at Elsley House, 24-30 Great Titchfield Street W1W 8BF. For more info go to www.oaktreeandtiger.com.

The exhibition catalogue describes these large, intensely detailed paintings, as ‘complex atemporal dreamscapes’ with ‘Escher-like anomalies’, The two largesse are a pair, one called Metropolis London and the other entitled Metropolis Rio. In the second of these you’ll have no difficulty in picking out the work famous statue of Christ the Redeemer, which towers over Rio from the Corcovado Mountain above the city. London landmarks are also easy enough to pick out in the companion canvas. In both cases, however, these familiar symbols are compacted into huge metaphysical panoramas than have nothing to do with everyday reality. It’s a little bit as if Piranesi had contracted matrimony with Giorgio di Chirico, producing two giant-sized children as a result. A catalogue note rightly says that ‘By contemplating both paintings simultaneously, viewers find themselves on the precipice between hemispheres, time and cultures.’

Something else these big compositions remind me of is the huge video panorama now on view as part of the Oceania exhibition at the Royal Academy. Other paintings, a little smaller than these, which also form part of Meridian Skylines show a similarly exuberant approach to reality.

It has to be said that one of the things that contemporary art too frequently lacks is any sense of the epic. Nor does it usually do much to excite the viewer’s imagination – to take him or her into a new imaginary realm.

What I admired about Caio Locke’s work was that, while it is very precise in handling, this freedom to dream was what it offered. You can let your eye roam around these compositions, but, wherever you look, you will tend to discover
Something that, maybe, you hadn’t noticed previously. Precisely the same thing is true of the video panorama on view at the R.A. 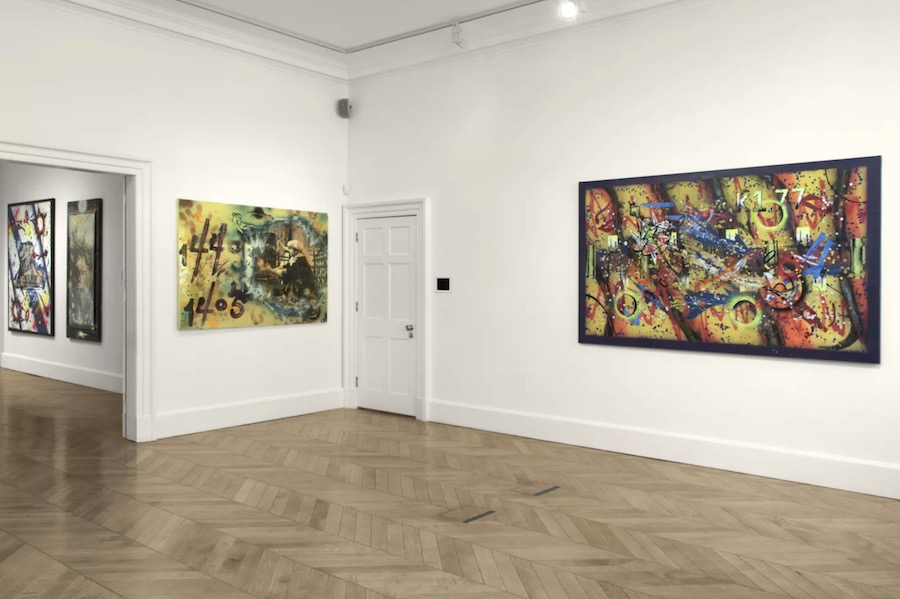 Rammellzee was one of those here-today/gone-tomorrow hip-hop art heroes who made an impression on the feverish New York art scene of the 1980s, and who is only now after his death, beginning to make an impact here in London.

Born in 1960, the same year as Jean-Michel Basquiat, he lived a good while longer. Basquiat died in 1988, Rammellzee lasted until 2010.

The current show devoted to his work at Lazinc, a newcomer to the London gallery scene located in Sackville Street, was preceded in the same space by one devoted to the work of Banksy. That is, we are confronted here with yet another hero of the street art scene, which is, as a cultural phenomenon, increasingly having an impact on both the minds and pockets of the rich. This in turn, I think, is also increasingly a puzzlement to our official galleries here in Britain, who tend to prefer the art they offer us to be a bit more sanitized, a bit more obviously devoted to displays of civic virtue. They wish these bad boys would slink away.

Basquiat and Rammellzee do, however, have the joint advantage of being safely dead. Dead art heroes are much easier to stage-manage than bad boys who are inconveniently alive. There’s no danger, for example, of Rammellzee rising up from his grave, to pull off the kind of stunt just performed with great effect by Banksy, with a work that self-destructed the moment after it made just over a million pounds at Sotheby’s. No chance of hidden surprises here, though the Lazinc Gallery did have a couple of elaborately costumed performers romping about at the evening preview. The dead hip-hop star may, after not too long an interval, be decorously shepherded in to the sacred halls of Tate. Not least because his work does paradoxically possess a lot of vitality.

Looking at his work with both Basquiat and Banksy in mind one sees that one of the ways in which he differs from both of them. Easily construed figurative images mean less to him. What he constructs are elaborate surfaces, texted with unexpected small objects, The exhibition publicity uses the French term bricolage, and this draws attention to the fact that Rammellzee’s work has a distinct resemblance to that of the early 20th century Dadaists.

And that takes one to an unexpected parallel. The Lazinc preview, full of art mavens, and the with two costumed performers doing their thing, was exactly the kind of ‘posh rebellious’ occasion that Dada served up to its early patrons, who did not belong to the working class of their own, now long-gone epoch. ‘What goes around, comes around,’ as the time-worn saying has it.