The RA’s celebration of its 250th-anniversary show has met with hosannas in the press, with maybe the loudest of all coming from those who see themselves as the declared foes and detractors of anything remotely conservative looking in the visual arts.

The tone is triumphalist, but is this, in fact, a triumph? – ELS

Burlington House is packed to the ceiling with artworks, and the vast majority have not the remotest likeness to what the annual exhibition used to offer the public in the dear dead long-ago days of Sir Alfred Munnings PRA. In his outgoing speech as President, an apparently inebriated Munnings claimed that Winston Churchill, amateur artist in addition to being one of the nation’s most revered political figures, had once remarked to him: “Alfred, if you met that Picasso coming down the street, would you join me in kicking his something-something?” Munnings left his audience in no doubt that this is exactly what he himself would have done. As it happens, Munnings and Churchill are both represented in the current show, (“The Great Spectacle”, 250 Years of the Summer Exhibition) though Picasso of course is not. However, the tone of the whole gigantic self-congratulatory display leaves one in do doubt that times have changed, to the point where it seems heretical to express even the smallest soupçon of doubt that this change is entirely for the better. 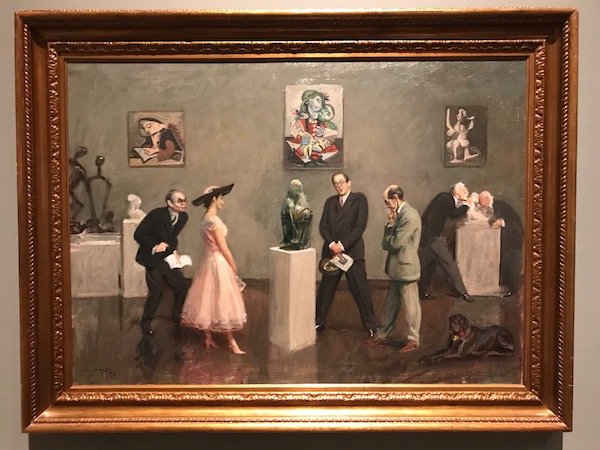 The show consists of three parts. In the main galleries, there is the traditional display of works from the annual send in – some from R.A’s who are there of right, others selected by jurors who are Academy members. This continues upstairs, in galleries mostly devoted to prints and works on paper. A separate series of galleries traces the history of the R.A., from its beginnings to the present.

To turn to these historical galleries first, it must be said, and said with both gratitude and gladness, that they offer a very solid, convincing history of British art, from the 18th century until the present. There are some inevitable absentees – for example William Blake and Francis Bacon. Bacon, however, gets smuggled in, in the form of a portrait by Ruskin Spear. Both Munnings and Winston Churchill are present, both with paintings that are in fact pretty good of their unambitious sort. Munnings offers not the gees-gees for which he was famous in his lifetime, but instead a satirical genre-piece showing a group of learned gentlemen admiring a lumpish bronze that may or may not be the work of Henry Moore. One of these admirers is recognisably the dwarfish figure of Sir John Rothenstein, Director of the Tate Gallery from 1938 to 1964. 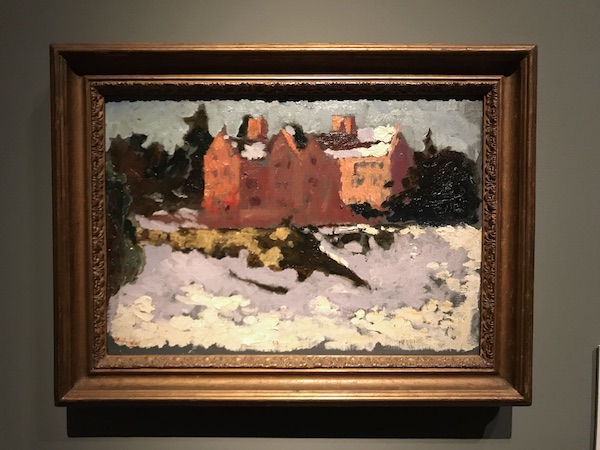 The historical display proceeds equably to the present, in its final gallery offering both a big abstract painting by the current PRA Christopher Le Brun, elected in 2011, and a dinky little stuffed nursing chair covered with embroidered devices, the work of Tracey Emin, appointed Professor of Drawing in 2011 – one of the first two female Professors since the Royal Academy was founded in 1768. OK, she’s a figure very much of our time, and her membership is to the Academy’s credit.

This is a show that, presented its own right, would have looked very much at home in the current programme at Tate Britain. It tells a very complete, convincing story about more than two centuries of British art and tells it even-handedly and well. 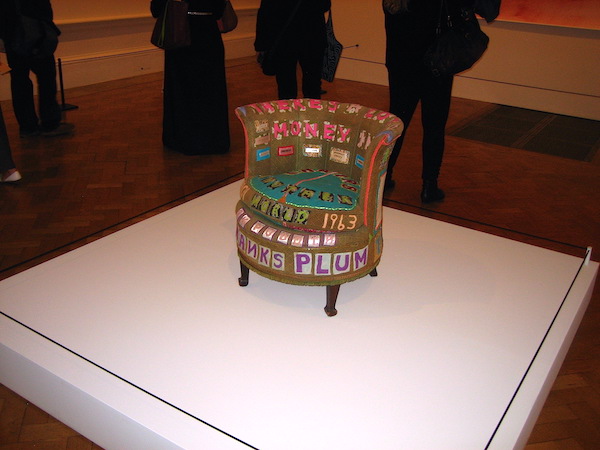 It’s when ploughing through the rest of the gargantuan presentation that one is struck with doubts. The tone is triumphalist, but is this, in fact, a triumph? The tone is set by Gallery III, with works chosen and hung by Grayson Perry RA, currently the British art world’s favourite populariser and democratiser. The walls are now bright yellow, and they are crammed to the ceiling with every imaginable sort of artwork, of every possible stylistic persuasion. Even squinting hard, it is hard to discover much artistic quality in most of them. Many of them seem just like the paintings one used to see, and maybe still sees, hung on the railings at Hyde Park- only perhaps here even more tightly packed. In fact, the whole thing chiefly qualifies as a single installation-artwork in its own right. The single creative name it shouts is that of – guess who? – Grayson Perry, doing his best with a huge but random supply of visual materials.

Other galleries in the main show, put together by other selectors, and reflecting their individual personalities, make similar impressions.

That feeling continues in the galleries upstairs, though to a lesser extent. There one occasionally pauses, not so much to admire, though there are things to admire – a big watercolour triptych by Paula Rego for example – as to wonder ‘How on earth did that get in?’ My favourite in this category was a wall-piece entitled One Grain of Rice, by Tim Lewis. It shows a pair of chopsticks poised above – yes – a bowl of rice, and at a slightly lower level, a checkerboard with red and black squares, with grains of rice scattered across it.

Food for thought there, no doubt, but not much visual nourishment.