The stone tower of Saint Augustine is a dramatic setting for an art exhibition and has been host to some interesting shows by alternative London artists over some years. It’s also convenient for many East Londoners, being close to Hackney Central. I would recommend a visit to see any show there, just for the chance to walk around this very specific location. From the top, there are great views of London. And each show is a chance to see how people respond to the space.

This is also a clock tower and this is a key aspect that Krinsky, Wyss and Eyre have drawn on the themes of time and materiality for their small group show. They are an appropriate group of artists to show together, producing thoughtful, crafted work, combining modern and traditional media. 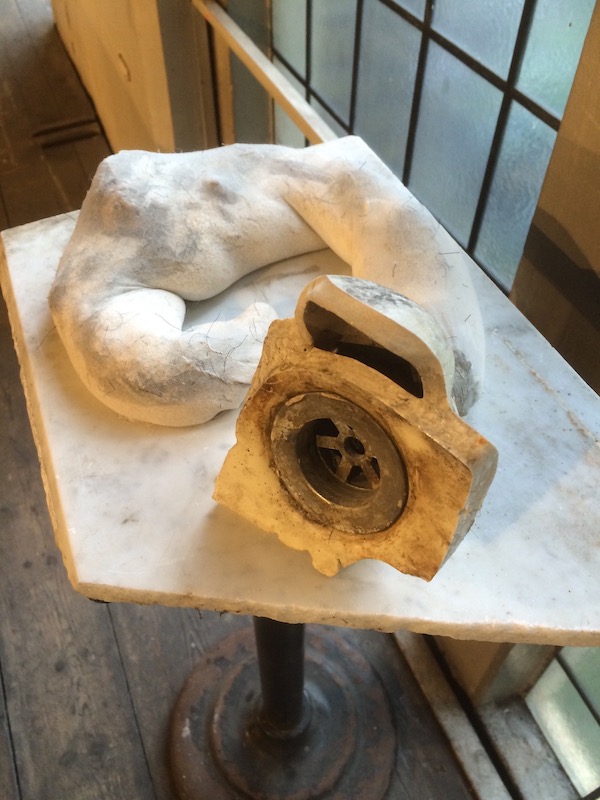 Ali Darke Beyond the Body

Wyss revisits her obsessive printmaking, remaking, refolding, repurposing human bones through repetitive printmaking. As a part of her installation, we get to see her copper printmaking plates for her bones piece that she has presented in diverse locations. The plates are laid on the floorboards in a pattern that uses similarity of shape rather than a position as an organising factor. A more theatrical piece, due to its location on the roof, is the thin copper sheet entitled Osmosis. This is fixed to the pole at the high point of the tower. Being up here in the sunset wind feels like onboard a ship, and indeed, on its first fixing, the copper blew out of place and flapped about in the Hackney air. Apparently getting the ladder up the spiral staircase was extraordinarily challenging. Wyss is not a fainthearted installer. She has dogged determination. She gets an idea in her head and follows it through, despite the physical challenges.

Eyre has a piece on the roof too, in steel, Baetylus which brings to mind a meteorite, those small pieces that often burn up in the atmosphere and become shooting stars. Eyre is concerned with human perception of stones. She emphasises those meteorites that make it through and land on the earth, and how they are thought to have come from the gods. Her video piece installed alongside the clock makes use of its proximity to the mechanism, and an out-of-sync striking of time adds to the mystery of the experience of watching her film of patterns, mechanisms. There is an underlying structure suggested which does not only reference science (the triangular structure of crystal) but also ancient chants, charms, magic. Wood. Stone. Bird. The mystery of the physical, natural world. Where do rocks come from? What is time? The attempts humans make as a social creature to interpret and have a relationship with these non-human elements and the inescapable experience of moving forward through time.

Krinsky has produced a sensible and effective way of working with the structure of the building which is challenging as it is not possible to harm its ancient structure for hanging pieces. She has repurposed the information hoardings fixings and created digitally printed scrolls whose pictures have been created using multiple media techniques, projecting photographs onto painted cells, photographing those, creating a designed piece with depth of colour and layer. Her work has developed through photographing the River Naab in South Germany whose water levels dropped during the hottest June on record. Her interest in documenting the changes to wetlands and waterways is expressed here, bringing the concerns of water management and environmental conservation to this urban location, so close to the new water lands freshly open to visitors. Not so long ago I lived on a boat here in Hackney and enjoyed the sensation being on the waters, close to wildlife, really feeling the slop of the canal beneath me as I slept here in the city. As the pressure of housing accelerates beyond breaking point, more and more are living on the rivers without sufficient infrastructure and support. It’s unforgivable of the authorities to have created this situation which is pressurising young people and forcing them into a lifestyle which in turn puts more pressure on wildlife and our wet spaces on which so much birdlife relies. And if they are there, they need better facilities. Krinsky may not have anticipated this kind of rant to be generated in response to her work, but it shows how her art is connecting to contemporary concerns. It’s relevant.

An equivalent space is the Belfry at St John’s, Bethnal Green. I’m lucky enough to have exhibited here myself with Miyuki Kasahara, an exhibition we called simply ‘The Tower’, a joint show examining stories of women in society who are outsiders, vilified for their own community. For this show Kasahara built a spiral staircase from thin wood on which I scrawled in ink words from the Pennine witch trials, having written a series of poems from the court documents. The space at St John’s, with its high ceilings, lent itself to this site-specific, atmospheric, dark project and the current exhibition by Ali Darke also uses the space to significant effect, particularly for Yaroslaff Soltan’s distorted anatomical pieces that aesthetically reference mummification. One figure hangs dramatically in the centre of the high space of the belfry. I was intrigued by his use of multiple forms, for example, the plethora of toes and by materialism that incorporates hair, wax and a urinate yellow.

Darke’s approach to fine art has been developed throughout her career as a designer for theatre. The innovative use of materials, using what is cheap and to hand for effectiveness, is what she does well. She has worked quickly and effectively to make a long series of pieces inspired by the strangeness of the body in creating growths called teratoma that the body makes secretly which contain all pieces of the body. They may have bones, teeth, hair, all kinds of parts, hidden in a ball deep inside the system. In women, they often grow in the ovaries, and indeed I personally had cysts of this sort removed from my ovaries. I had been keen to see them (I still have my old wisdom teeth with their gnarled roots), but sadly this wasn’t to be. Darke’s pieces disturb and revolt in a pleasingly visceral manner, but have been assembled from what appears to be (mostly) broken bits of toilet and stockings filled with upholstery horsehair and fine sand.

Suzi Morris’s paintings also explore the unseen, her recent series ‘Bioinfotics’ being informed by the recent flood of data from genome sequences. Her works are not so much immediately visceral as the work by Darke and Soltan, but with their pale and watery azure colours, evoke a sense of the heavenly among the exhibition’s earthy (even subterranean) sculptures.