Rebecca Scott’s huge oil paintings of defaced magazine pages. It’s a visceral exhibition by a confident painter, secure in her style, able to wow us with colour. Look at the young women in their orangey-red, glowing towards us in burnt scarlet, in cherry-red satsuma, leering out of a dark teal scene. They are impossibly long, like on a catwalk, their legs and arms soft and relaxed, like models in a fashion show.

These are models in a fashion show. For these are spreads from VOGUE, from the magazine we all flicked – and still flick – through, even anti-fashion feminists like myself. Glossy, beautiful bodies. The dream, sold to us through products, brands and a whole industry of pictures created for fashion.

It’s a visceral exhibition by a confident painter, secure in her style, able to wow us with colour.

On the train the other night I picked up some reading material from the free bookshelf at Nottingham station. Drawing for Fashion, or something similar, it was full of how to draw a fashion model. The distorted dimensions of the female form deemed necessary to show clothes for selling – the book showed how to draw that standard altered woman, with different jaw and head shapes for some small variety. I saw the same view in the photographic shoot that lies behind Scott’s large piece, the body type selected for the pictures, the angles by which they are shown powerfully present, with the viewer’s eye a little below the painting. These women are all legs and arms, their faces quite expressionless. There are no bitch-resting faces here. This is VOGUE. The genesis Scott has chosen for her work.

Scott tells me how she was at one of Vanya Balogh’s curated group exhibitions in the Q Park carparks of Central London (the next one coming up is at the Whitcomb Street carpark for the year of the Pig, opening 10 February, and is not to be missed) and was attracted to the subject matter and concerns of  a younger artist’s work. She thought to herself, that if she was tutoring, she would suggest developing the ideas by getting hold of a magazine and scribble on it. Like a child, drawing a pair of glasses on a teacher to assert their own personality and debunk the teacher, the artist should get going with felt pens and connect with the physical women locked behind its coated, shiny surface. That’s how I understand Scott’s process to be, in part. It’s difficult to offer advice to another if you’re not in a formal institutional relationship. In the end, Scott took that idea home with her. And the idea stayed. That’s a bloody good idea, she thought. I’ll have that.

And so the first stage of making began. The magazine was acquired, the pages turned, the felt tips automatically and casually making their way across the images until the whole of VOGUE was covered in lines and marks, graffiti style, injecting a bit of the spirit of Guerrilla Girls, putting a bit of street back into the magazine that exploits street art for fashion purposes. In particular, she gave the women bodies. What’s underneath those expensive rags? Pubic hair, flesh, tits, vulvas. She drew them back in with felt pen. She used her pens to make the men recede into the background, melt into the shadows, disappear into grey-blue-green anonymity. Male faces were stripped out, masked. 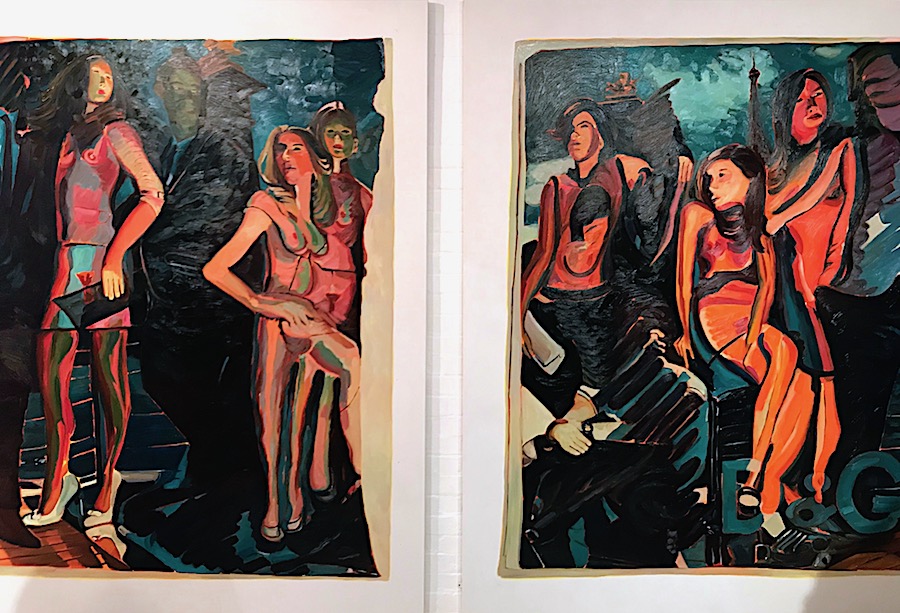 Ironically, the effect of this played somewhat into male-female tropes that are stereotypically present in cinema and elsewhere. The women did end up naked and fleshily on display. The men acquired a rather James Bond allure, a mysterious silent presence of power in the shadows. But how can you fight the stereotypes that are everywhere in film? You can only question with the pen, with the brush. You can’t take it straight on and punch away what you don’t want. You can only move, not wanting to be pinned down, fixed. Which is what so many young women feel they are. Caught in a trap. Wanting to flee from the body image imposed on their minds by the fashion industry. Stuck in a cycle which leads through dieting to illness and beyond that. The effects of the celebration of skinny women are well-known to contribute to anorexia nervosa, bulimia, a preoccupation with body weight that affects women to their detriment. Even high-powered women (and some men) find solace in restricted eating and have a distorted perception of their own body weight.

Scott’s work, despite this serious undercurrent, is fun. It playfully enjoys the bags and watches, the little objects of fashion sales, made more prominent by the nakedness of the female models. A hint of Paris, where the models are gathered for their pseudo-cinematic scene, is suggested by the softly curving Eiffel Tower that peeks behind the group. Paris, is of course, very sexy. Paris sells. Paris easy to represent. Just put an Eiffel Tower in the background. These days of news, when one sees Paris, it is impossible not to think of the gilet jaunes, who may be just around the corner, burning tyres, marching, shouting, protesting the effects of economic and government policy squeezing their lives in this (hopefully) post-colonial times. Europe is hurting, and France is not happy. Still, for fashion, it’s all cool. Riots can be cool too. Turn that fashion filter onto a subject and even a working-class protest becomes trendy. The trick of the fashion editor is to trap it beneath the silk and gloss layer smeared on top of paper.

The transformation of materialism present here is one of the most interesting facets for me, reflecting on the paintings, writing up this article at my desk the following day. I think about the process Scott went through – the exhibition at which she saw the work which gave her the idea, the magazine she got hold of, the felt tips which she took out of their plastic case and scrawled over the pages which she opened (the smell of fresh magazine!) and then the finish in oil, five foot, six foot paintings, that feel substantial in scale, the strokes of oil paint squeezed fresh from the tube, unthinned, applied over a thin wash to help with the fluid motion of the paint. There’s a mastery of process here. I want to avoid the word mastery here, for feminist reasons, but there, I found it too hard. If any readers have any suggestions for me in future for when I hit this brick wall I’d be delighted to hear them.

I am an illustrator that normally works with ink and on a smaller scale and for me, the large oil technique still confounds me. The mystery. I stood with Scott hearing her talk about her process with open ears, wanting to learn. She’s a painter, she’s a teacher. Dirty Pictures educates us.