If you are planning an imminent trip to the Netherlands, there are two must-see exhibitions on at the moment. Pieter de Hooch in Delft: From the Shadow of Vermeer at the Museum Prinsenhof, Delft and Rembrandt-Velázquez: Dutch & Spanish Masters at the Rijksmuseum, Amsterdam.

Known as the Golden Age of painting, the 17th century was artistically an enormously fruitful time – SH

By 1650 the bustling, prosperous city of Delft had emerged as one of the country’s leading artistic centres. Among its residents were painters such as Johannes Vermeer, Carel Fabritius and Hendrick van Vliet. It was then that Pieter de Hooch, the son of a bricklayer from Rotterdam, moved to the city of his mother’s birth to begin a radically new tradition of painting. At the start of his career, he painted primarily soldiers. Guardroom scenes of drinking and card games in a muted palette, often with a serving girl in attendance. In these genre works, he paid little attention to defining the surrounding space and architectural elements – something that would later become his hallmark. Domestic interiors were often crudely depicted in brown and grey brush strokes, in contrast to the bright colours and details of the figures. In A Seated Soldier with a Standing Serving Woman, for example, the bright red of the woman’s dress and the reflections on the metal of the soldier’s cuirass, stand out against the indistinct dark background, demonstrating De Hooch’s growing skill of capturing the effects of light. 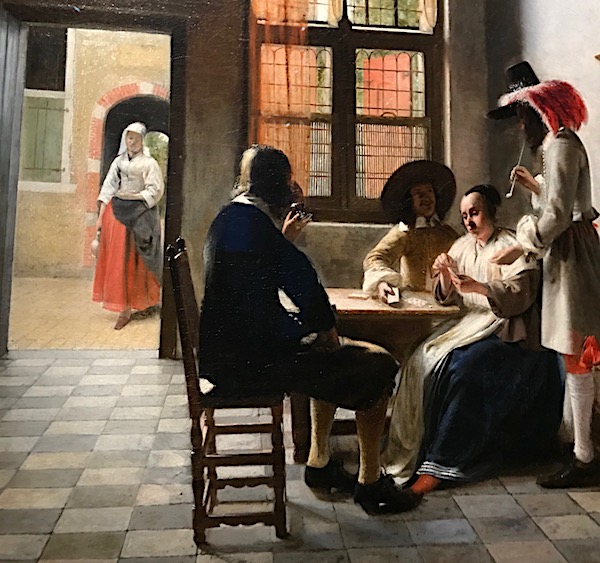 However, it was after 1655 that he began to portray the domestic life behind the facades of Delft houses. This was an innovation. He was 29 years old and producing stunning works of courtyards and interiors full of warmth and saturated light. What is so pioneering about these paintings is not, simply, the exact rendering of detail – the brick walls and tiled floors painted with separate brushstrokes as if to make his bricklayer father proud or the experimental perspectives and radiant light beaming into these spare, tranquil domestic settings through open doors – but the prominence of the feminine. Over and over again, De Hooch produces scenes of great tenderness where women and children are the central protagonists. A woman in a white bonnet holds the hand of a small girl. Their gaze is both sensitive and mutual — one of caring familiarity. A bucket and broom caste on the brick floor of the courtyard suggests ongoing domestic chores. The woman may have been a maid. In the left-hand of the painting is another woman – possibly the lady of the house – with her back to the viewer. She is standing in an archway that leads through to another courtyard flooded with light. On loan from the National Gallery of London, this painting is one of six dated 1658 and is, rightly, among De Hooch’s most famous works.

Along with The Mother, that depicts a woman unlacing her red bustier to feed an infant lying in a crib on the floor beside her, and A Mother Delousing her Child’s Hair, known as ‘A Mother’s Duty’, it shows an astonishing empathy with the lives of women. De Hooch presents 17th century Delft as a place where one would have liked to live. Life, here, is comfortable, bourgeois, unhurried and orderly. Dogs wander in an out. Men and women chat companionably. In A Mother’s Duty, the fur of the small mutt sitting on the brick floor staring out into the garden is illuminated by the light from the open door. He is both a doggy dog and a symbol of fidelity. It is, perhaps, not too far-fetched to say that in these mother and children scenes De Hooch presents a secular vision of Madonna and Child. Later, he was to move to Amsterdam and paint a more affluent clientele, in more opulent interiors. However, it is the paintings executed in Delft that created his reputation. The aim of this one-off exhibition is to bring him out from beneath the shadow of the more famous Vermeer, to restore his affectionate, beautifully observed paintings of light and perspective to their rightful place within the canon of 17th-century Dutch art. 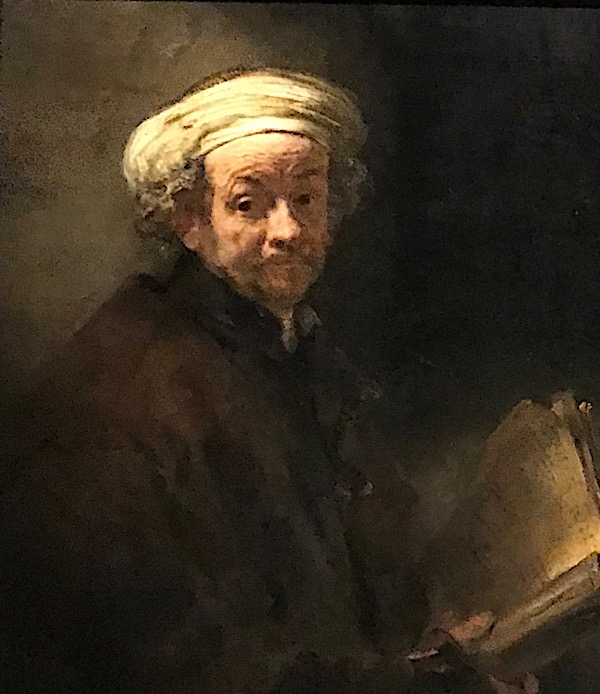 Rembrandt Self Portrait as the Apostle Paul 1661

Over in Amsterdam, there is a special collaboration between the Rijksmuseum and the Museo Nacional del Prado in Madrid to mark the Year of Rembrandt, 2019 and the 200th anniversary of the Prado. The exhibition presents an outstanding selection of paintings by 17th century Dutch and Spanish masters including Rembrandt, Velázquez, Murillo, Hals, Zubarán and Vermeer. Known as the Golden Age of painting, the 17th century was artistically an enormously fruitful time for both the Netherlands and Spain. Although there was no direct contact between south and north, it is fascinating to see the stylistic and intellectual synchronicity between the different artists. Paintings of these masters have been displayed in pairs. This extenuates both similarities and divergences. Themes range through religion and faith, wealth and love, to the use of light and shadow.

Nothing tells us more about the personalities and differences of Rembrandt and Velázquez than their self-portraits. Velázquez with his handsome head of dark hair, waxed mustache and courtly white ruff sits beside Rembrandt with his beefy pug nose, in a black velvet beret and jerkin. Though they inhabited very different social milieus, their bravura artistic skill, along with their understanding of human nature, renders them supreme among artists of their time. Though, for my money, it will always be Rembrandt, with his existential gaze, which turns the emotional screws the tightest to bring tears to the eyes.

Catholic Spain and the Protestant north are exemplified by Zubarán’s symbol of Christ’s suffering, the ‘Mystic Lamb’, which is shown alongside a spare and sparsely decorated Protestant Church by Sendredam. Here iconoclasm is banished as the Word of God resounds from the pulpit. One highly imaginative paring is that of Zubarán’s St. Serapion, 1628 set beside the Threatened Swan 1650 by Jan Asselijn. The former shows the saint, his arms raised and bound in flowing white sleeves, sacrificing himself for his faith while the fluttering white wings of the swan become a symbol for Johan de Witt, who was assassinated in 1672 for his political beliefs.

Two outdoor scenes by Velázquez and Vermeer, View of the Gardens of the Villa Medici in Rome circa 1650 and Vermeer’s View of Houses of Delft circa 1658, illustrate their interest in the use of horizontal and vertical effects within the picture plane. However, if this was a competition, the Vermeer wins hand down for atmosphere and intimacy. Meditation and religious reveries are explored in a pairing of Murillo and Rembrandt. While Murillo shows Christ before his crucifixion as a Man of Sorrows, Rembrandt paints his own son Titus as a Franciscan monk bringing secular love into the work.

During this period Spain and the Netherlands were very different, though yoked together by war for much of these artists lives. Spain was a long-established Catholic world power, while the Netherlands was a nascent small Protestant republic, with an emerging middle-class. Nevertheless, for both these countries, the 17th century proved to be a Golden Age for art.

Sue Hubbard is an award-winning poet, novelist and freelance journalist. Her latest novel Rainsongs can be purchased here: