Art lovers have Magritte safely classified as a leading Surrealist. A new exhibition at Luxembourg & Dayan, entitled René Magritte (Or: The Rule of Metaphor), shifts the focus, to reveal him as one of the fathers of Conceptual Art. Ironically, the brief period the show covers, 1927-30, is that during which Magritte was resident in Paris, and most closely associated with the Surrealist Group headed by the dictatorial André Breton. Magritte and Breton fell out when, at a dinner party in Paris, Breton loudly demanded that Magritte’s wife remove the cross she was wearing around her neck because it was incompatible with the movement’s anti-clericalism. The breach was never healed.

In one, entitled L’usage de la parole, two formless blobs are presented, floating against the sky and casting shadows on the ground beneath them. They are labelled, respectively, miroir and corps de femme.

As the exhibition handout reminds one: “To produce a metaphor is to borrow a semantic unit – be it work, or image – from its habitual context and transpose it into a new one. Red lips become ‘cherry’, the night is a ‘curtain’, and the world a ‘stage’.” 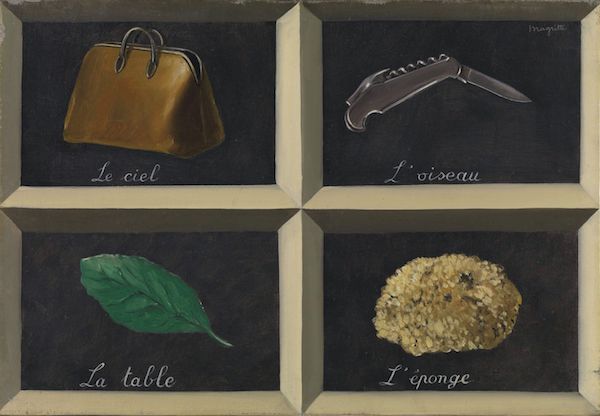 The comparison is a telling one, as the exhibition consists of a series of staged encounters between what is actually there to be seen, and what the thing seen allegedly stands for or represents.

Compared with more recent Conceptual presentations these works by Magritte offer a resonant sense of irony – irony being a quality that the self-admiring Conceptual Art movement of the 1970s and 1980s conspicuously lacked. Indeed, one can venture the idea that Magritte invented the conceptualist approach simply in order to detonate it.

We live in a society where, more than ever before, words are presented in indissoluble pairings with images. Virtually the entirety of modern commercial advertising is based on this. The image doesn’t do what it is meant to do – “Buy this!”- “Go to see that!”- without the presence of a caption or headline to define the course of action that the spectator is being commanded to take. Yet, without the image, words tend to lose their potency, though there are occasions when the words on a billboard can be left to stand alone. 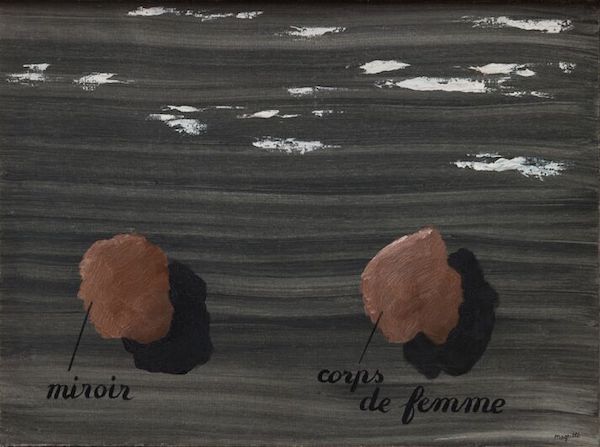 Even then, they are never quite universal. The presumption is that the spectator who encounters the message is [a] literate -i.e. in possession of a skill that he or she had to be taught – and [b] is in possession of at least the script and the language in which the message is written. The monoglot Arab-speaker on the highway to or from Heathrow probably won’t get it.

Aptly entitled, The Rule of Metaphor offers one a good deal to think about.