There can be no doubt that Richard Long is one of the giants of British art. Or so a very impressive curriculum vitae would lead one to suppose. He is now in his early 70s. He made his reputation almost half-a-century ago, as what was then called a Land Artist – going for epic walks, often through very remote locations. When the Turner Prize was young, that is to say during the 1980s, he was four times nominated, in 1984, 1987 and 1988, finally winning in 1989, the year before the prize took a year’s hiatus, to emerge as a rather different beast in the YBA-dominated 1990s. Now, of course, it has become different again.

As such, they are beautiful, elegant, tranquil things. They’d be a pleasure to live with – ELS

If one looks at the list of artists short-listed for the Turner in the year that Long won it, it offers an image of a very different art world from the one we have now. All of them, however, made a significant impact in their time. Among them were Lucian Freud, Paula Rego (one of two women listed – the other was Gillian Ayres), Sean Scully, Richard Wilson RA, famous for his reflecting pool of sump oil installed in the original location of the Saatchi Gallery, and a much-exhibited Italian sculptor, Giuseppe Penone, who was later to be the winner of one of the most prestigious of international art trophies, the Japanese Praemium Imperiale. 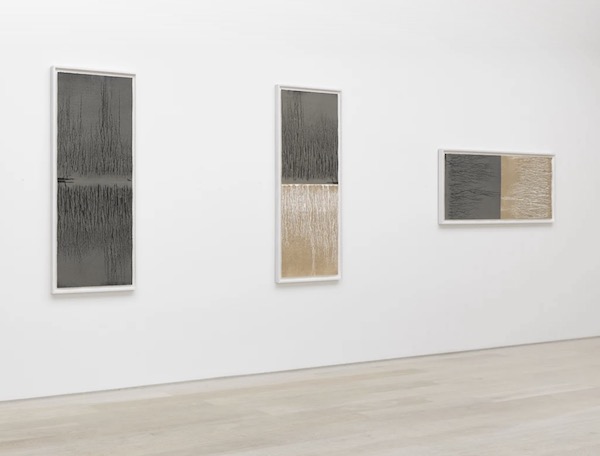 None of these has disappeared. Some names are even bigger than they were then. One thinks particularly of Freud and Scully – the former now safely dead and ensconced in the kind of Olympus that awaits certain one-of-a-kind instantly recognisable figurative artists; while the latter, Scully, is without a doubt the most widely, most prestigiously exhibited abstract painter now living. I mean no disrespect, but I don’t think Long now enjoys quite the degree of universal recognition that belongs to these two names. Equipped with a knighthood, a title he doesn’t use, he is ever so gently fading from view, a fate that is overtaking quite a number of good British abstractionists of about the same vintage, William Tillyer, very recently on view at the Bernard Jacobson Gallery here in London, offers a case in point.

As the current exhibition at the Alan Cristea Gallery in Pall Mall shows, Tillyer and Long have a good deal in common. Their abstractions are based on nature. They refer to nature, though they are not works made directly in the great outdoors, as has been the case with earlier, more ambitious creations made by Long.

This new, quite modest series is entitled The Tide is High and, as the accompanying press release tells one, the images depict ‘rivulets of muddy water’, and are inspired by the scenery of the Avon Gorge, which is where the artist grew up. Most are elegant screenprints – the tide isn’t going to rise up and swamp your sofa. As such, they are beautiful, elegant, tranquil things. They’d be a pleasure to live with.

What they do inevitably bring to mind, however, is the degree to which things have now changed in the world of contemporary art.
The whole context for art – the art of once-confident Modernism, in direct line of descent from the greats of the late 19th and early 20th century – a situation that still existed when Long won his Turner Prize in 1989 – has mysteriously changed and crumbled away.

The old certainties about what is certifiable ‘avant-garde’, still extant in the 1980s, have mysteriously vanished. Partly this is due to new technology – computers, digitisation, the impact of the web. Partly it is due to a change of spirit. These prints by Richard Long, though abstractions – or should one say, ‘though abstracted’ – still seem to whisper under their breath ‘Bonjour, Monsieur Monet’. They are drifting away from the world we inhabit now.