Sometimes two shows come along that seem perfectly timed to contradict one another. This is the case with the Richard Serra show now at Gagosian Britannia Street, and a show called Hope to Nope now at the Design Museum.

Serra, despite occasional controversies – the famous of these being the 1989 removal of his sculpture Tilted Arc from Federal Plaza in New York because of strenuous public objections to it – has long been a darling of the American cultural establishment. A handsome new book, Richard Serra: Drawings 2015-2017, published originally for an exhibition at the Museum Boijmans van Beuningen in Rotterdam, gives ample evidence of his status. There were Gagosian exhibitions of Serra’s drawings in London in 2014-15 and 2016, so he is a familiar presence here as well. 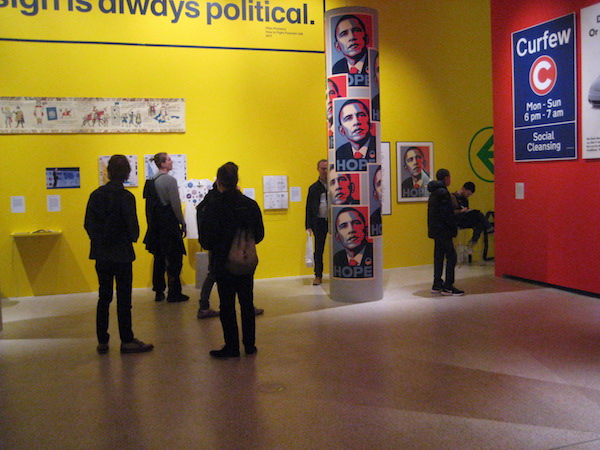 In many ways, Serra symbolises what the cultural establishment here in Britain, as well as that in his own country, feels most comfortable with. Refined, austere, monumental in scale, free of awkward political or sociological content of any sort but at the same time impeccably avant-garde, in the sense that our local cultural leadership has defined that term, his work fits comfortably into the structure of things as they are, of cultural diktats coming from the top down. It’s art, one might say, that knows its place, even if at the same time it contrives to position itself pretty far up the ladder.

Of course, there are some problems to be surmounted when trying to insist on the absolute primacy of contemporary art of this subject-free hyper-refined sort. When I say ‘subject-free’ I mean of course art that has no subject but itself, art which constantly exerts its right to exist independently of contingent material circumstances.

Given the irrepressible human tendency to find metaphors and images even in places were none are intended (Leonardo da Vinci wrote a famous text about this long before the idea of total abstraction in art was invented), it’s maybe not surprising that even works as radically austere as these large black-and-white ‘drawings’ – so-called – at Gagosian tend to summon unintended images to mind. In my case, wickedly frivolous as I probably am to notice it, that of huge blackout curtains imperfectly drawn, with thin triangles of light appearing where the fabric just fails to meet.

In a text written especially for this show, Neil Cox tends to emphasize this by pointing out that the compositions are actually made up of overlapping sheets. He concludes, rather uneasily, by saying:
“Serra’s drawing aims to keep drawing alive while resisting its fundamentally metaphorical pull, that project can only really work (if one is still making a drawing) not by eliminating all metaphor but by holding it at bay.” 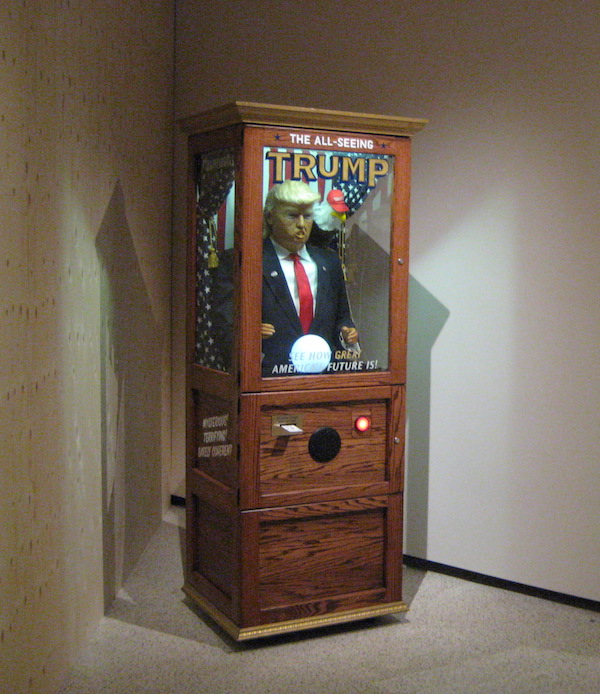 It strikes me that this statement is, in critical terms, a way of both eating one’s cake and having it. If one asks what may be being blacked-out by those massive curtains, one only has to make one way to the Design Museum. Hope to Nope is, in the catalogue introduction tells one a “survey of the shifting relationship between graphics and the turbulent politics of the last ten years.” The text continues as follows:
“The story of graphics and politics since 2008 is dominated by new technology, which has opened up new ways to connect individuals and causes, to harvest and filter data, identify patterns, predict preferences and shape political strategies. It has transformed public engagement in politics, affecting the production, control and reach of political messaging – and its visual forms.”
Should you feel starved of meaningful images at Gagosian in Mayfair, you can take yourself off to the Design Museum in Kensington and be swamped in them.

The exhibition is divided into three parts:

At its beginning you find Shepard Fairey’s famous poster of Barack Obama as the image of Hope. At the end there is a mannequin of Donald Trump, shut up in a fortune-teller’s booth. Press the red button and out comes a ticket, with your own particular fate. Mine said: “Many surprises await you in the future… such as racial profiling and global recession.” So, what else is new?

This clamorous exhibition, full of slogans of all types – some you will very likely agree with and some you won’t – has a global span. President Zuma is there. So is Jeremy Corbyn. So is the Grenfell Tower. So is a vast inflatable duck, which starred at a protest in Brazil. There is even an image of the first holographic freedom of expression protest, held in 2015 outside the Parliament building in Madrid. In this around 17,000 people participated, using a Holograms for Freedom web-site, in order to circumvent a local law against spontaneous protests outside government buildings.

Perhaps Serra should now make a hologram of Tilted Arc, now in store, and reinstall it in New York’s Federal Plaza. If you object to having to walk around it, just walk through it.