The small exhibition of work by Richard Smith currently at the Flowers Gallery in Cork Street offers, among other things, a demonstration of just how drastically once huge reputations can fade. Smith died last year, at the age of 84.

By the time Richard Smith had arrived on the scene, the real battle was over – ELS

The gallery is showing just eleven works, but they cover more or less the whole span of his career. The earliest painting dates from 1958, the most recent from 2002.

Tate, if you look the artist up on its web-site, owns no fewer than 96 Richard Smiths, but only four of them are currently on display. Three dates from the early 1960s, one more was made in 1972. For our national collection of British art, he’s not a living presence, but a historical figure. One to be dutifully ticked off on a list.

One reason, perhaps, for the current lack of interest in Smith’s work is that, after very considerable early success here in Britain, he moved to the USA in 1978. He had always had strong connections with the New York art world. His first solo show was in New York, at the Green Gallery in 1961, an event which some art historians see as one of the first manifestations of Pop. Though Smith was, throughout his career an abstract artist, a lot of his work paraphrases the slicker kinds of commercial packaging, of the sort associated with luxury products. However, his reputation in America never perhaps surged quite as high as it did in the UK. 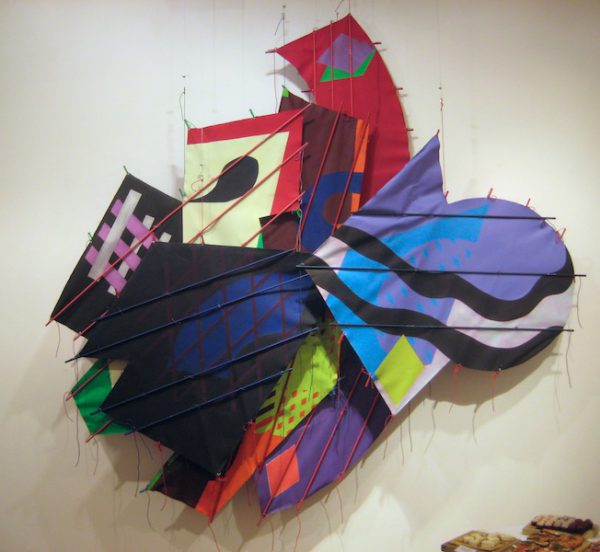 His second solo show, in the early 1960s, was at the Kasmin Gallery in London, then at the very center of the action. He was the British representative at the 1966 Venice Biennale and won the grand prize at the Sao Paulo Bienial the next year. In 1971 he was appointed CBE. In 1975 he was given an ambitious retrospective at the Tate. His obituary in The Guardian reports that “he had museum shows in Europe and North and South America throughout the 1970s.” After that, it says curtly, “his public profile declined.”

These fluctuations of interest in who he was and what he did are hard to explain, but looking round at the art world as it is now may offer some clues. It’s clear, for instance, that the Establishment of his day found it very easy to like and offer patronage for what he did. Looking at the little display at Flowers it’s easy to see why. There’s nothing included that might, as the saying has it, “frighten the horses”. Earlier post-war abstraction, in spite of itself, had a polemical edge. The CIA pushed American Abstract Expressionism because it seemed to sum up the difference between American individualism and freedom of expression as opposed to rigidly state-controlled Soviet art. By the time Richard Smith had arrived on the scene, the real battle was over. Capitalism had made its point.

Smith made work that, for all its apparent experimentalism of form, had nothing at all to say about society. It could hang on any corporate wall, or (in the case of the largest item at Flowers) dangle from a corporate ceiling, without causing the slightest perturbation.

Now times have changed, and supposedly avant-garde art now makes a virtue, very often, of being stridently political. Whether this actually supports the artists’ claim to be on the ball and innovative is a moot point. But then, too, Smith’s success in the 1960s and 1970s was based on the fact that what he produced was something that the cultural and financial Establishment of the day could take in its stride. Times change and tastes change with it. Maybe Richard Smith’s turn will come again. There’s much in this posthumous show that’s easy to like. A good deal easier, I murmur to myself, than the find of preaching the Taties go in for now.