This year’s Royal Academy Summer Exhibition is the 248th edition and opens to the public next week on 13 June.  One of the founding principles of the Royal Academy was to mount an annual exhibition open to all artists in order to finance the training of young artists in the Royal Academy Schools.  Accordingly, the Summer Exhibition has been held without interruption since 1769 and continues to play a significant part in raising funds to finance the current students of the RA Schools. As a result students are able to study for their three-year postgraduate programme for free. With such a noble premise, it seems unfair to be overly critical of the Summer Exhibition.  In past years the show has felt staid, out of touch, traditional and even provincial.  However, in recent years there has been a distinctive attempt to bring the event firmly up to date and relevant.  Each year a co-ordinator is chosen from amongst the Academicians to arrange the hang and competition has been tough to make their mark and to give the show a fresh identity.   From Tessa Jaray’s unique wave like display of the small paintings to Michael Craig-Martin’s painting the walls of the main galleries in his own palette of pink and blue. This year the task was given to sculptor Richard Wilson.  It is quite a task to create a vision from the 1,240 artworks, selected from 12,000 entries.  Wilson has noted the current trend towards collaborations in the art world and as duos are not allowed to be given Royal Academician status, he invited a diverse group of more than 20 international artistic duos to exhibit throughout the Main Galleries.  These include Gilbert & George, Jake & Dinos Chapman, Boyd & Evans, Tim Noble & Sue Webster, Pierre et Gilles , Bill Woodrow & Richard Deacon and the much photographed art fair duo EVA & ADELE amongst others. As you enter the Annenberg Courtyard, there is a large site-specific installation by architect, sculptor Ron Arad RA. Spyre is a 16 metre high corten steel oval cone, hiding motors, cogs and slew-rings.  Each segment moves at different speeds, ensuring that the unpredictable acrobatic postures of the installation are never repeated.  At the tip of Spyre is an eye holding a camera, the footage from which is relayed to a screen on the façade of the RA.

The exhibition halls were positively glowing white accentuating the grand period details of the building and in particular the gilded coving and roundels.  Consequently, the show feels lighter, airier and more spacious.  Moving the architectural works to the large Weston room gives them a breathing space and leads to the natural progression in the small Weston room of photographs of German industrial architecture by Bern and Hilla, one of the artistic duos selected by Richard Wilson. 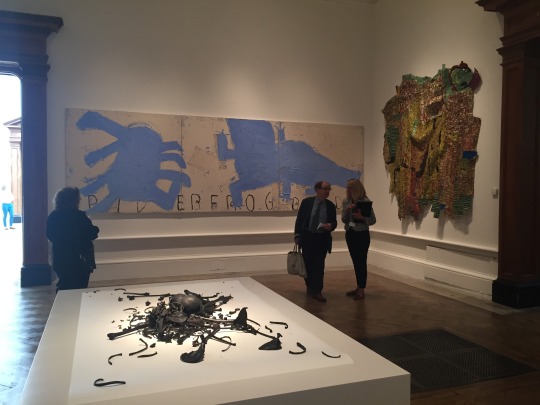 The contrasting subdued lighting and works in Gallery II was the highlight of the show with a large work by Gilbert & George dominating one wall, Rose Wylie on another and works by Al Anatsui, Mimmo Paladino , Elsworth Kelly, Marina Abramovic , Georg Baselitz and Zatorski & Zatorski to complete the display. Another noteworthy grouping was the work of Japanese artist Aono Fumiaki whose mini exhibition explores the theme of reform, healing and rebirth in reference to the Great East Japan earthquake of 2011.  His sculptural works use salvaged broken objects left behind by those most affected by the earthquake.  The result is a moment of calm among the Academy’s overfilled walls.

Particular mention must go to Jimmy Cauty’s The Bridge, a shipping container with peep holes inviting you to view a model world of overturned lorries and  flashing ambulances. Works ranged from traditionally figurative, semi-abstract, abstract, conceptual and mixed media and by a range of known and unknown artists. In other words, there is something for everyone. No matter how many times you wander through the galleries, you always spot something new.  The current Royal Academicians are represented with works by  Bob and Roberta Smith, Cornelia Parker, Tracey Emin, Joe Tilson, Wolfgang Tillmans,  Anselm Kiefer and numerous others. Of special note the magnificent Landline Darkness, a rich painting in greens and blues by the abstract painter Sean Scully.

The prestigious £25,000 Charles Wollaston for the ‘most distinguished work’ in the exhibition has been awarded to renowned British sculptor David Nash RA OBE for his work Big Black, a charred redwood. Nash works primarily with wood that has fallen naturally or has been felled due to age, disease or safety.

See The RA Summer Exhibition with Interactive 3D Technology Here: Use Mouse To Drag for 360 Panorama