The Gerhard Richter show currently in the smaller of Gagosian’s three London galleries is maybe best described as “a bit of a tease”. It consists of serried rows of overpainted photographs, clearly visible if you look at them through the gallery window, but too small for you to make anything out unless you go in. They are obviously designed for what one might think of as the boutique market. If you like one, it is, despite the grandeur both of the artist’s reputation, and the even greater grandeur of the gallery that represents him, to think of actually possessing it. When you get close, these are seductive objects. One would look fine on a bedside table, under a lamp. In a rather similar fashion to the smaller of the Joan Snyder paintings now on view at Blain/Southern, a few streets away, these are highly possessive objects, in a way that other examples of elite contemporary art are not.

I enjoyed the show, which is the work of an artist with a finely tuned talent for subtle visual effects – ELS

Many of them are very directly art about art. The gallery website is informative about what they are and how and why they were made. As it says, they merge “photographic representation with abstract materiality.” It turns out that a large number of the images in the show are based on photographic images that the artist made during the run-up to a retrospective show of his work held at Tate Modern in 2011-12:
“[They] capture the flux of visitors throughout a single day in a handful of specific locations. Richter narrates the increasing flow of visitors with different paint colours, obscuring areas with the squeegees he uses for his distinctive smeared abstractions. Screens of white communicate when there are few people in the galleries, and bright and bold colours indicate when the crowds and subsequent activity grow.”

They are therefore essentially a tribute to the comfortable bourgeois touristic world from which the Tates now so constantly, and usually so vainly, struggle to escape.

Which, in turn, endows them – if you choose to think about it that way – with a resonant irony that is possibly unintentional.

Let me be frank: I didn’t mind that myself. I enjoyed the show, which is the work of an artist with a finely tuned talent for subtle visual effects. These small works, like much else in current high-end contemporary art, have a kinship with JMW Turner’s ‘colour beginnings’. Which is to say, in this case, with some of Turner’s sketches of interiors at Petworth. As the Bon Jovi song has it: “The more things change, the more they stay the same.” 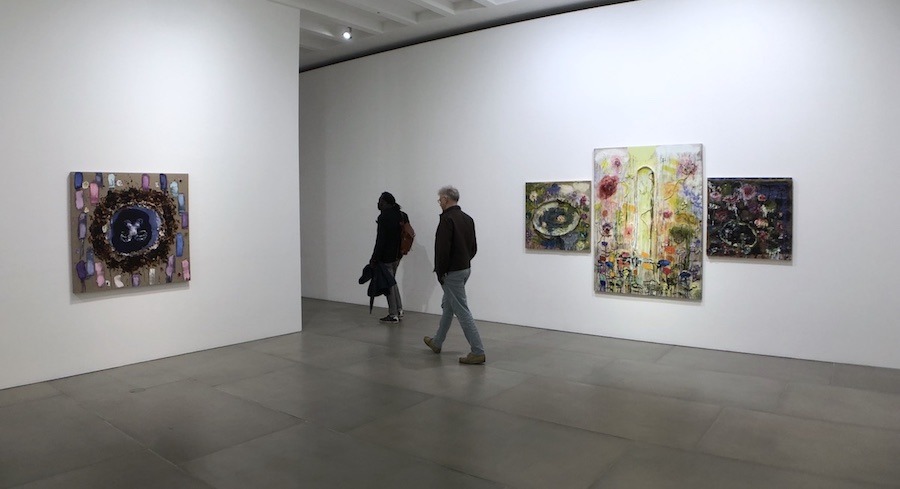 I’ve been putting off writing a review of the Joan Snyder show at Blain|Southern, which I saw the day after it opened last week because I didn’t know what I thought about it. After a weekend’s cogitation, I still don’t.

This is the first exhibition in London of an artist who is very well known in her own country – the United States. She is not young – she was born in 1940 and is therefore now in her late seventies. In the USA, she first made a reputation in the 1960s. She has had plentyy of recognition since. She is a MacArthur Fellow, a Guggenheim Fellow, and a National Endowment for the Arts Fellow. Her work can be found in a large number of major American public collections: the Metropolitan Museum and MOMA , the Whiney Museum of American Art, the Jewish Museum, the Guggenheim, the High Museum in Atlanta, the San Francisco Museum of Modern Art, the Art Institute of Chicago, the Phillips Collection in Washington DC, the Dallas Museum and the National Museum of Women in the Arts.

The internet tells one that: ‘Snyder is a self-proclaimed feminist and creates work in the vein of abstract expressionism because of how that genre of painting is dominated by male artists. Within the work, she uses shapes and marks that evoke female anatomies such as vaginal openings, nipples and breasts.[8]

Obviously, her presence in London now, at Blain|Southern, one of the grandest of London’s multi-national commercial galleries, is to do with the current great upsurge of interest of interest in women’s art. And she has the advantage, unlike many of the women artists now being promoted by our official institutions, of being alive and still with us, rather than safely dead.

Grandiose claims are made for her in her native country. Here, for instance, is an assessment by Lance Esplund in the Wall Street Journal:
‘The functions of Ms Snyder’s art, first and foremost, are to further the tradition of painting and to explore the most serious aspects of the human condition; to connect us not only to one another and to nature but to ancient rites and myths. She reminds us that no matter how modern and civilised we are, art can still be raw, primitive and talismanic. Without apologies or decorum, Ms Snyder’s work awakens all of the things still wild within us.’

Why is it that I can’t go as far as that? Snyder is certainly a striking artist, but I can’t draw a deep breath and rank her among the greats – the game-changers of our time. Too often, her paintings seem to offer the icing without the cake.

This metaphor has not been chosen entirely at random. In Snyder’s current work, on view at Blain|Southern, there is a certain cake-icing quality. Paint, in sugary tones, rises up from the surface, as if it has been piped from a tube. The compositions offer a complex mingling of the figurative and the non-figurative. During her career, she has passed from figurative painting to non-figurative, then back again. There are elements of both in her current productions. The title of her London show is two words – Rosebuds & Rivers. Some individual works have titles that allude to music: Summer Fugue, Heart of the Fugue. Basically, I think, she wants you to gaze, and plunge through the surface and be swallowed up. In my case, the brittle, sugary surface tends to stop me half-way.