Where does one begin when exploring the oeuvre of Robert Smithson? As an autodidact, his interests in travel, cartography, geology, architectural ruins, prehistory, philosophy, religion, science fiction, popular culture and language spiral through his work while, in his practice, he produced paintings, drawings, sculptures, architectural schemes, films, photographs, writings, earthworks and all the stops between. As a result, there are many potential entry points.

The usual answer, based on an interview Smithson gave in 1972, has been that 1965-66 was a breakthrough period in his art when he emerged as a “conscious artist” having abandoned painting to arrive at an abstract means of expression “devoid of any kind of mythological content”. 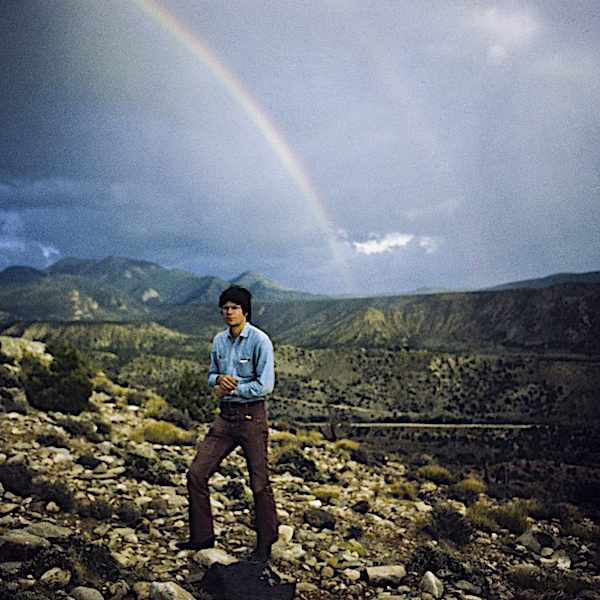 By contrast, these exhibitions acknowledge that his work before 1965-66 was significant. ‘Robert Smithson: Primordial Beginnings’ at Galerie Marian Goodman, Paris, investigates Smithson’s exploration of “origins and primordial beginnings, the archetypal nature of things.”

Their selection of works on paper demonstrates how Smithson worked to use his words, a geological agent. The earliest works here are fantastical science fiction landscape paintings embedded in geological thinking which point to his later earthworks and proposals for collaborations with industry. These are landscapes that suggest prehistory. Time – past, present and future – was a key element within his work from his earliest pieces. So, craters and volcanoes can be found in these early science fiction landscapes, in his sculptures, and earthworks, demonstrating his long-standing interest in geological time.

The fuller quote from Smithson, in that same interview from 1972, identifies a slightly earlier but particularly significant starting point. Smithson said: “I guess I was always interested in origins and primordial beginnings…the archetypal nature of things. And I guess this was always haunting me all the way until about 1959 and 1960 when I got interested in Catholicism through T.S. Eliot and through that range of thinking.”
Caroline Jones and Thomas Crow are among those that have identified three essential aspects of Smithson’s work deriving from this earlier period. The first are visual motifs such as spirals and circles – used as stigmata on drawings of Christ’s hands and feet – and a focus on the colour red as being the colour of blood – ‘Blood, Blood, Precious Blood, Blood, Blood’ being the opening chant of 21 ‘incantations’ written in 1961 referencing his bloody crucifixion images. The colour red and the spiral are combined in ‘Spiral Jetty’ indicating the extent to which these motifs coursed through his visual and verbal oeuvre.

Second, as Eric Saxon has noted, ‘it is the suffering and decay of this time-space continuum and not transcendence that is more pronounced in this earlier work’ as conveyed, for example, in ‘Fallen Christ’ (1961) where Christ is shown at his most burdened and oppressed by the duration between geologic eras, exhausted’. Smithson’s 1960–1961 iconographic works take a hard look at the problems of temporality and this is continued in his later work through the concept of entropy. Yet Smithson never stops using the language of theology in order to speak about this reality. In speaking of the natural world and future environmental movement, for example, he used Biblical concepts of the Fall, sin, and crucifixion: “The abysmal problem of gardens somehow involves a fall from somewhere or something. The certainty of the absolute garden will never be regained.” and “All of those sins. And here’s 2000 coming so near. Sin everywhere. The dead river, with its black oil slime. The crucified river instead of the crucified man.” 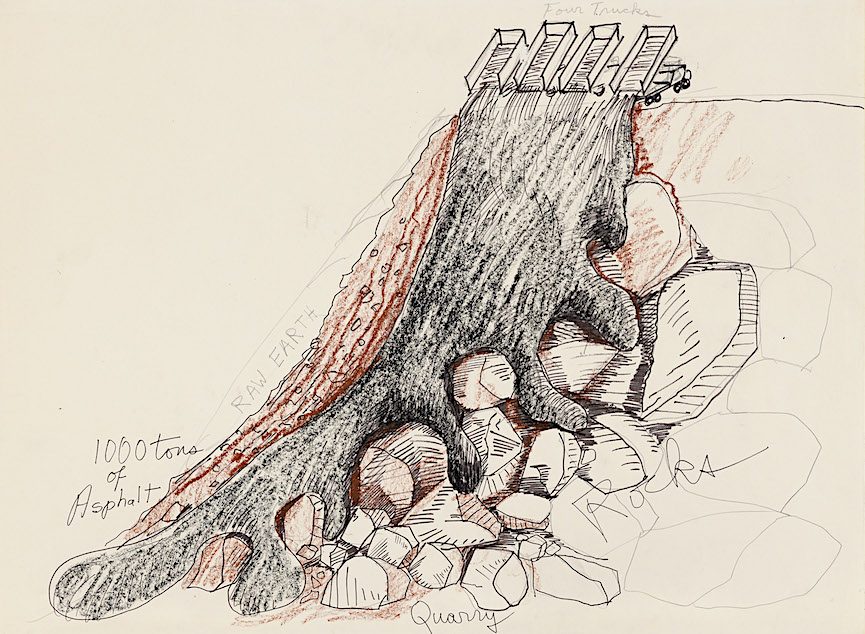 Third, as Jennifer Roberts has pointed out, Smithson believed “it was better to adopt a strategy of infinite scepticism, infinite fragmentation, infinite duration, in order to arrive at eternal time.” Saxon identifies Smithson’s images of ‘Christ in Limbo’ – the time when “Christ’s earthly body is a materialised symbol for what is happening elsewhere” – as an equivalent to his writings about sites and non-sites. Smithson defines “the site as limitless or “open limit” and the nonsite as a confined, limited space, often cropped within a rectangle in a gallery within a frame”. Smithson’s works, Saxon argues, “are most completely understood as materialised parts of a symbolic whole, simultaneously existing both in the material realm of the viewer and in a conceptual space that transcends its physical state”.

In these ways, “Smithson’s early works focusing on religious subject matter and entropic materiality set the groundwork for Smithson’s subsequent development of … themes of timelessness, infinity, circular time, and teleportation in his work.” Katy Siegel, another who sees continuities between Smithson’s early period and his later work, sums up these continuities in terms of “primordial beginnings” —”like entropy, conceived in opposition to the dominant ideology of progress”—extending from geologic time but encompassing early Christianity; “the “crystal world” that so profoundly permeated Smithson’s later thinking as rooted partly in [T.E.] Hulme’s privileging of the severe geometry of the “inorganic world” of math and the physical sciences as a modern incarnation of the Byzantine”; and Smithson’s continued “search for the absolute, to look beyond momentary concerns even as his youthful certainties grew more nuanced”. 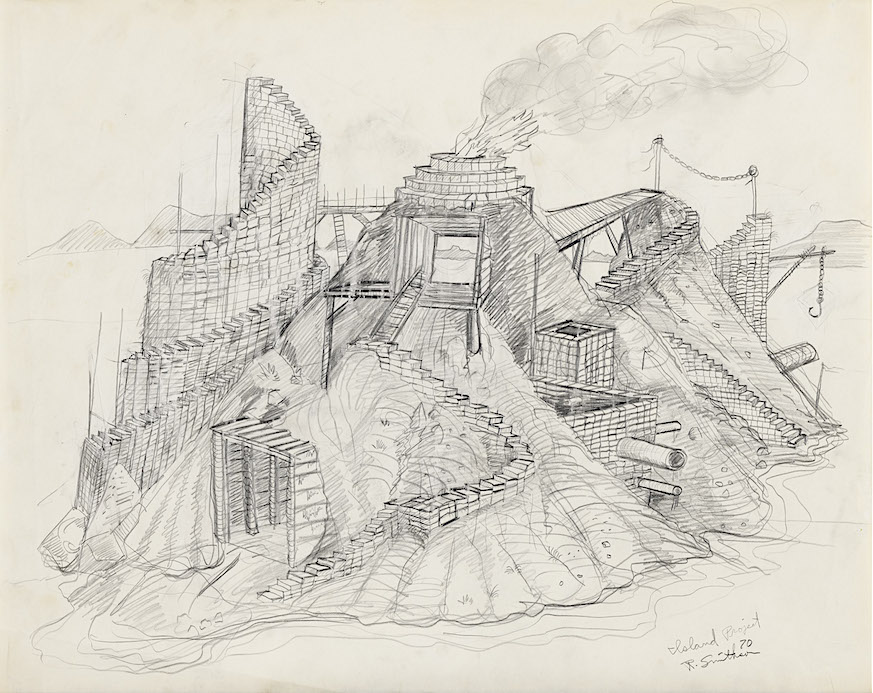 Entropy defines the majority of works shown in ‘Robert Smithson: Hypothetical Islands’ at the Marian Goodman Gallery, London, where attention is paid to Smithson’s enduring interest in islands. This show presents over fifty works spanning 1961 to 1973, many of which are being exhibited for the first time in many decades. The selection of works moves from mobile to spiral islands, through forking jetties, meanders, concrete seas and rising volcanoes. Smithson observed that landscape and its inhabitants were always undergoing change. In 1969 he started working with temporal sculptures made from gravitational flows and pours, thinking through these alluvial ideas in drawings.
His islands were speculative sites – being unrealised projects – showing the constantly changing surface of our world and the limits of human knowledge. His conceptual islands explore time, limits, scale and human collaboration with geology. Some of his islands are locations for sculptural invention, others are sites investigating the formation of landscape through earthworks and sculptures.

Miami Islet was the island project that came closest to realisation; a telegram from the Canadian government stopping the project when one hundred tons of green-tinted glass was on its way to Vancouver’s coastline. An installation at New York’s Dia Beacon reveals an element of Smithson’s vision for this project as the countless fragments of shattered glass that form ‘Map of Broken Glass (Atlantis)’ (1969) are layered both literally and figuratively. As the title implies, the sculpture is to be seen not simply as a pile of sharp, transparent fragments but also as a map of a legendary lost continent. “It is a shimmering collapse of decreated sharpness . . . arrested by the friction of stability.” Charlie Hailey suggests that “all of Smithson’s projects appear as thresholds, each a waypoint to the next in a continually redrawn map”. “Each probes and adjudicates” while tacking toward an “unknowable zero island”.

Smithson was invested in a definition of art that was timebound and precarious, that would not claim monumental status, rather collaborate with entropy. Up until his death in 1973, Smithson demonstrated that art can be a means to explore how we might try to understand our place on the planet, with all of its complexities.

All this is incipient in that earlier starting point where he identified with the “Christian mystics bemoaning a fallen world”. Incipient there, too, is his awareness of that the unknowable zero island – the prolongation of spirals which reverberate up and down space and time – is only realisable on a metaphysical level, as that offers the only path from the contingent natural universe to something beyond.