‘To express a movement in all its character and truth, it is important that it be at once the result of the successive moments that have preceded the moment that one has fixed, and that it announces the sensation of those that will follow.’  This is how Rodin explained his conception of movement in an interview in 1911.

The Courtauld Gallery’s small, intimate, two room exhibition is devoted to a little-known body of work made by Rodin in the last two decades of his life.

In the last years of his life, Auguste Rodin (1840-1917) who by 1900 was considered France’s greatest living artist, moved away from the specific sculptural commissions for which he is best known and began to focus on sketching the life model in the studio.  By this point, he was a wealthy man who was able to employ models as often as he wished.  He also became fascinated by dance and the movements of visiting dance troupes and the effect on their bodies.  This was not the dance of ballet that Degas a generation earlier was fixated on but that of the avant-garde dancers, particularly Loie Fuller and Isadora Duncan with their wild, swirling arm movements and the way their bodies moved in space. In addition, he was introduced to a Cambodian dance troupe in 1906 and began to furiously draw their hands and arms as well as those of the Japanese performer Hanako with her anguished  performances. He then moved on to acrobatic bodies, becoming enthralled by acrobat/dancer Alda Moreno who was the companion of his friend and long-time collaborator the sculptor Jules Desbois – one of Rodin’s marble carvers. He met her some time before 1905 but she disappeared and it wasn’t until 1910 that he reconnected with her and she began posing for him regularly. The series which became known as The Dance Movements (Mouvements de danse)  were based on Moreno’s limbering exercises. She had the combination of strength, athleticism and physical grace that Rodin sought in both male and female models. He made drawings, plaster and terracotta models which were only seen by his very closest circle of friends and supporters.

a fascinating study of precise movements of the body

The exhibition has pieced together Rodin’s complex practice.  From the process of step by step simplifying a series of drawings, producing cut-outs to casting a set of identical torsos, limbs, and heads in clay, which was then assembled and shaped while wet into their exaggerated acrobatic poses.  The exhibition blurb is unashamedly academic emphasising what a scholarly feat it was to piece together the process of each model and how with the aid of technical analysis undertaken by researchers and curators at both the Courtauld and the Musee Rodin challenges established ideas about Rodin’s methods.  This alone could normally make an exhibition dry, deliberately anti-populist and more about the curator than the artist. However,  leaving aside the academic approach and intense dissection of each piece, you are left with a fascinating study of precise movements of the body.  Also, fortunately, the selection of  works rises above the scholarly approach and even without this background knowledge the pieces speak out.   At every stage of Rodin’s process whether it be his initial gestural drawings, the watercolours, the simple line drawings, the cut-outs,  a rough clay model or a cast bronze his natural ability and emotional connection with the subject shines through. There is a feel of classicism among the sculptural fragments yet the rough-hewn clay is filled with a restless emotion and doesn’t feel experimental at all. 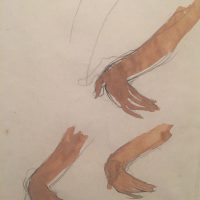 Study of hands by Rodin 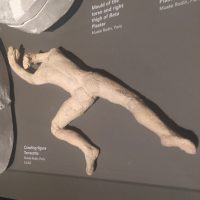 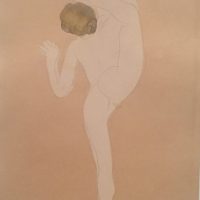 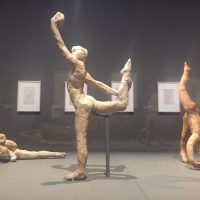 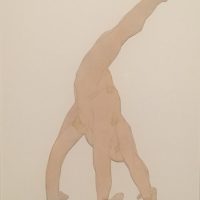 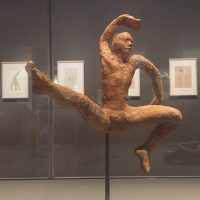 Terracotta model of dancer by Rodin