Modern Art Oxford is currently presenting the first posthumous exhibition of works by Rose Finn-Kelcey (1945–2014). The artist was highly acclaimed among her peers – yet lesser known to a wider audience – even though Finn-Kelcey had exhibited at numerous galleries in the UK including The Royal Academy of Art, Whitechapel Gallery, the Hayward Gallery, the Saatchi Gallery and Tate Britain – during a long and illustrious career.

As is often the case in death; the artist’s work has been the subject of increasing attention

As is often the case in death; the artist’s work has been the subject of increasing attention of late, not least due to very contemporary themes including feminism, spirituality, commodification, and individual empowerment – and a political modus operandi that would have seen her dismissed at certain points in her career, by what was still a highly patriarchal art establishment.

Upon the artist’s death in 2014 at the age of 69, Finn- Kelcey could easily have slipped from the minds of the art collective consciousness; both political and feminist, yet the artist had spent the last few years of her life assembling a monograph of her work, enabling the viewer upon posthumous reflection, to explore and appreciate the range and complexity of her practice.

In fact, Finn-Kelcey approached each work of art from an entirely unique perspective and a practice that was ever-evolving, permanently employing new skills ranging from bullfighting and flamenco movements to the manipulation of steam, and the use of taxidermy – these were acts of continual reinvention, and shifting identity.

Focusing largely on performance for a ten year period between 1975 and 1985, the viewer is left with a large collection of artifacts from these often complex works, now only existing as videos or photographs, possibly losing some of the depth and intensity of the artist’s original performances; now ephemeral slices of history.

Yet a striking addition to the show at Modern Art is the artist’s recreation of Van Gogh’s Sunflowers; a work that had sold at auction for the record price of £24.5 million, ironically a painting that Van Gogh had entirely failed to sell for a minuscule fraction of that price. 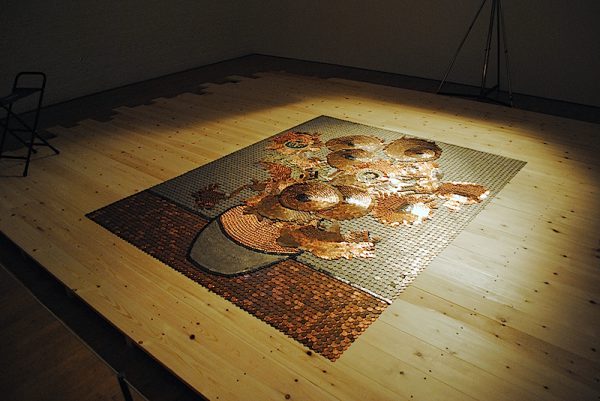 Here we return to the nature of posthumous value, and an act by the artist that was inspired by the dramatic change in the status of a work of art – and hence the artist. With ‘Bureau de Change’, 1987, Finn-Kelcey quite literally transformed the picture into money – even though with further irony: the artist could not afford the £1,100 of loose change needed to create the work at the time – which now with a sense of the artist’s own humour – could be seen as additional dialogue regarding the artist’s ‘value’ to society – especially that of any female artist.

The work is here arranged in two layers on a slightly raised floor, out of an assortment of silver and copper; old ten pence pieces, shillings and so forth, here recreate Van Gogh’s work, with the added performative element of a security guard and camera watching over the now-highly ‘valued’ piece.

The viewer also becomes an integral part of this installational universe by mounting a set of stairs to a platform reminiscent of an auctioneer’s podium, the work is a reflection of all elements of Finn-Kelcey’s practice, incorporating installation, sculpture, video, and performance – with a wry knowing wit.

‘Divided Self (Speaker’s Corner)’, 1974 is a black and white photograph of the artist sitting on a park bench – talking to herself. It’s Speaker’s Corner and no one else is listening. It may be easy to forget that the work was created in a time when many female artists felt almost entirely ignored by the establishment and society, that their concepts, perception and sociocultural voices remained mute – or in a cyclical dialogue with itself – reflected here in the artist’s work.

This was a closed loop of isolation that Finn-Kelcey fought against throughout her career, and now – ironically not unlike the sunflowers – her work has taken on greater value and poignancy with her passing. And with that let us hope we are not destined to repeat the socio-cultural mistakes of our past.

Born in Northampton, 1945, Rose Finn-Kelcey studied at Ravensbourne College and then at Chelsea College of Art, later becoming a major figure in the contemporary British art scene for over four decades. She continued to live and work in London from 1968 until her death in 2014.

Finn-Kelcey’s engagement with questions of power and agency was a driving force behind her decision to stage works within the public institutions that shape our civic realm. Such interventions included her striking flag works, such as Fog, flown from Alexandra Palace in 1971, and Power for the People, hoisted briefly at Battersea Power Station in 1972.