This is the first public gallery show of Lichtenstein’s paintings to be held in Britain since Tate Modern’s well-attended retrospective in London, in 2013. The artists only other UK museum exhibition was at Tate in 1968. Now, Tate Liverpool has compiled as part of their highly regarded ArtistRooms series another chance to see this important artist’s work.

Certain works have a kitsch quality, a kind of thrift store element to them – AL

Lichtenstein was born in New York in 1923 and developed an interest in drawing, taking watercolour classes at the New York School of Fine and Applied Art in the 1939s. In 1943 he was inducted into the US army and while in Europe he gets to visit the Louvre. In Paris. In 1946 he completed his degree at Ohio Star University. 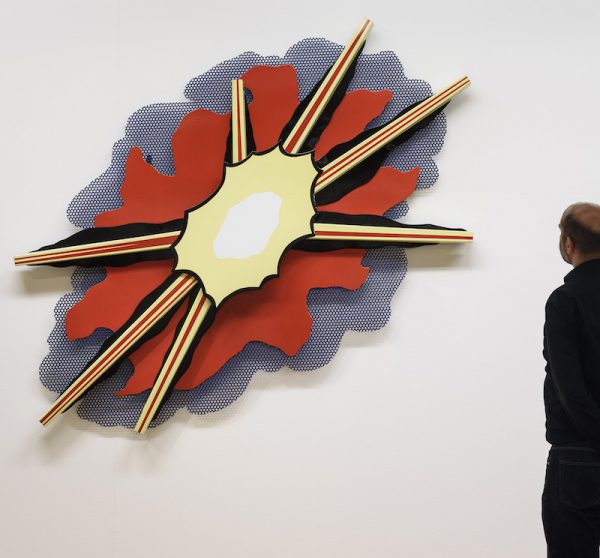 I have always enjoyed the work of Lichtenstein, finding it to have an eerie honesty. For me, they are about youth and relationships interpreting the darker and hidden aspects of how people relate to each other.  Ever since I was a young girl, I used to be fascinated by his crying and suspicious girls in romance. They just seemed to correlate with my own life and the things I was feeling at the time. However, although I interpreted these works mainly through their subject, it is interesting to discover that it was not the subject that was of main concern to Lichtenstein but more the way he conveyed his subject and the process and medium he used.

At first, people were offended by Lichtenstein’s use of commercial subject matter, but this exhibition brings us closer to understanding the work of this iconic artist. Lichtenstein was accused of copying his sources, but his reply was, ’My work is actually different from the comic strips in that every mark is really in a different place, however slight the difference seems to some. The difference is often not great, but it is crucial.’’

‘’Lichtenstein restricted his paint colours to imitate the four colours of printers inks’. He also used Ben-Day dots; a system devised to increase the tonal range in commercial printing through a dot screen method.’ He admired the way comic artists of the 1950s condensed subjects such as love and war into strip cartoons from American comic books, which had a wide readership in the 1950s.’’

As you come into the exhibition, you will see the painting ‘In the Car’, 1963, Oil paint and Magna on canvas. This is the second larger painting of this version and the source of this image came from a comic-strip story featured in the September 1961 issue of ‘Girls’ Romances’. Lichtenstein had ‘’reorganised the original composition of the cartoon to create a more stylised and sharply contoured image. He removed the thought bubble, and in this painting, he is careful with his imagery. It depicts the height of a dramatic moment. He is taking the ready-made, i.e. the comic strip, mass media, using rigorously composed imagery, but also using the process of painting to create tension creating a return to the real. Lichtenstein is emphasising the artificial nature of mass media and exploring emotionally charged moments, using painting and man-made, synthetic media. He is using the handmade to convey the ready-made.

Quite often there is a visual oscillation of the surface of his artworks. Certain works have a kitsch quality, a kind of thrift store element to them as in his moonscape of 1965. Lichtenstein celebrates this artificiality and kitsch effect.

I enjoy the way Lichtenstein brings his emblem dots into ceramics. His ‘Set of Dinnerware’ which was mass produced in 1966 depicts designs from graphic symbols usually employed in advertising or cartoons to suggest shading and depth. This set is one of an edition of 800 produced in New York by the Jackson China Co. Inc. For the Durable Dish co. Very inspiring work. The dinner sets have a Japanese feel about them, almost art deco. Very interesting to see how he has zoomed in on the emblems of advertising in this dinner set to the point where the original emblem has become almost unrecognisable and taken on a new identity. 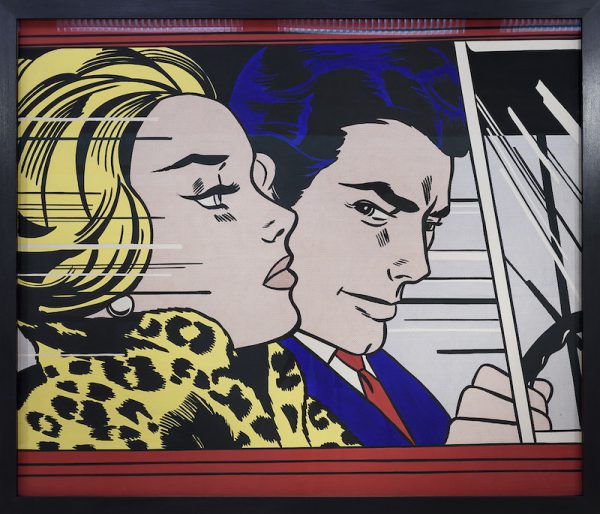 In the Car 1963 by Roy Lichtenstein

I love Lichtenstein’s use of colour. As much as he is considered a commercially inspired artist, there is something spiritual about his work also. , ‘Moonscape’, 1965, screen print on plastic is a wonderful deep hue, and the intensity of that blue conjures up so many emotions.  Again seascape, 1965 uses materials of the time, plastic and screen print to celebrate the materials and ways they are used within the artistic process.

Lichtenstein uses the materials of his time in his work. His artwork ‘Sandwich and Soda’ 1964 is a screen-print on polystyrene. Printed on plastic, this is one of Lichtenstein’s earliest Pop prints and the first to be made on a surface other than paper.

Lichtenstein is a clever draughtsman. He draws the nude with simplicity focusing on line and using dots to emphasise shading. He used what is referred to as a flash lamp technique, taught to him by his art tutor. This technique involves setting up a still life or performance and turning the light on and off very quickly on the subject matter. The tutor would then ask his students to paint how they interpreted the scene. It is as if Lichtenstein takes the brief second in time and turns it into a story. It becomes magnified, and we relate to that moment because in many ways they are similar to moments we have experienced ourselves.

The exhibition also shows the only film that Lichtenstein made. ‘Three Landscapes’. The film is divided into three panels and is a juxtaposition of movement and photography. ‘’Roy Lichtenstein’s triple screen film installation is a mesmerising hybrid of film, painting, billboard, comic strip and kinetic spectacle… Lichtenstein’s only venture into filmmaking premiered at the Los Angeles County Museum of Art in 1971 as part of the ground-breaking  Art and Technology program.’’ The project placed international artists – including Claes Oldenburg, Robert Rauschenberg, Andy Warhol and others – in residence with leading California-based industries, and exhibited the results of their collaborations.’’

In the film, ‘Three Landscapes’, Lichtenstein spent two weeks at Universal Studios in February 1969 and decided to make film loops of sky and water, projected on several screens in the gallery. Lichtenstein filmed on Long Island, New York working with independent filmmaker Joel Freedman. The resulting five-minute film loops juxtapose footage of the sea and a tropical fish tank with a static Ben-day-dot pattern and still images of a blue sky, clouds, and a seagull. The still and moving images are divided by a thick black line that echoes the comic-strip images of his paintings. This black horizon line, which rocks to and fro, combines with a continuous repetition of Lichtenstein’s ‘moving pictures’ to produces a contradictory viewing experience, emphasising the overall flatness of the imagery while engaging the viewer in an ambient cinematic spectacle.

The exhibition also includes some interesting screen prints. Modern Art 111, 1996 screen print on paper combines motifs from different artistic movements associated with modernism; all tendered in Lichtenstein’s  trademark style. There is something similar to Picasso, the elements are deconstructed stylised and relate to cubism. There is a grid arrangement, diagonal lines and geometric influences that relate to Piet Mondrian, ‘’a parody of modern art, witty fusion, paying homage to artists he admired’’. References to Seurat and Monet are also very evident and the idea of cropping an image so that the image becomes refocused and reframed as well as the painted dots purposely not being painted flush with the canvas, highlight Lichtenstein’s appropriating motifs from Art history and shows how he is also aiming to break free of the pictorial frame.

The exhibition highlights Lichtenstein as primarily an easel artist, exploring his career as a painter., Other artists such as Tracy Emin who used her bed as a source of exploration are in some ways similar to Lichtenstein in the way she focuses in on the bed, composing it like a painting and reinterpreting the narrative of the bed, Lichtenstein is doing something similar except he is using popular culture, comic books and advertising to reinterpret their original context.  The exhibition shows a deeper more complex side of Lichtenstein’s creativity, exploring his style from past to present, indicating that it is not so much the subject matter that interests him but more the way he approaches his subject.

‘’This exhibition draws from the ARTIST ROOMS collection of over 1,600 works of modern and contemporary art, displayed across the UK in solo exhibitions that showcase the work of 40 major artists. The touring programme gives young people the chance to get involved in creative projects, discover more about art and learn new skills. Since 2009, 40 million people have visited more than 150 displays at over 75 museums and galleries.’’