The late Roy Oxlade (1929-2014) is currently in some danger of being remembered, first and foremost, as the partner of the current ‘emerging artist’ phenomenon that is Rose Wylie. This is unjust. Oxlade was a formidable figure in his own right – not only as a painter but as an influential figure in art education and as a writer on art. He was a contributor to The London Magazine, Modern Painters and Art Monthly.

If this nevertheless sounds a little grim and serious, as do other aspects of Oxlade’s biography – pupil of David Bomberg, teachers diploma at Goldsmiths College, further studies at the Royal College of Art, an MA thesis entitled Bomberg and the Borough – An Approach to Drawing (1974), followed by a PhD thesis entitled Bomberg’s Papers: The Spirit in the Mass – a Commentary (1980) -then the memorial show at the Alison Jacques Gallery should correct this impression. 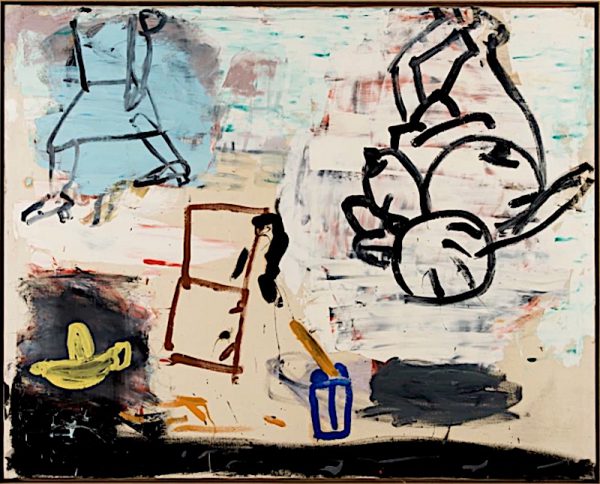 It consists of fair work, made in the 1980s and 1990s, and the thing that immediately strikes one is the playful spirit that pervades it. In a statement made at the very end of his career, Oxlade spoke of treating the surface to be painted rather as if he was hastily filling a room with whatever lay closest to hand:
‘There would not be much fun in leaving the room empty […] I have put in some other stuff, some characters, some actors – tables, pots, colours, easels, lamps, scribbles, figures and faces to interact with each other. I adjust the temperature. Open the windows, shut the windows, throw things out, change the lighting.’

In this respect, he and Wylie were clearly kindred spirits. What distinguishes them both from the circle of London-based painters from which they originated stylistically – Bomberg, Auerbach, Kossoff – is a keen sense of the absurd. Often accompanied by disrespect for usual pictorial hierarchies.

For example, if you encounter a painting entitled Lemon Squeezer and Coffee Pot, this – a group of still life objects – is what you expect it to be about. Not a bit of it here. The most eye-catching feature of the composition is an upside-down female nude, with mammoth breasts.

Another picture is entitled Blue Stalk and does indeed feature, as its central item, a bunch of flowers in a vase. But then your eyes are caught by the two female nudes hovering like acolytes on either side, like angels attendant on a Madonna.

The three London Group painters I have just named are never mentioned in connection with the Surrealist Movement. Instead, they are usually classified as being in some way related to Expressionism – Kokoschka, but not quite. Neither Oxlade nor his widow fit comfortably into this bracket. They have as shared sense of fantasy that these exemplars lack.

One of the things that struck me most immediately about the collection of paintings on view is their sheer joie de vivre. Even in those where there are no human figures present, the objects dance. The Kitchen Knife and Scissors that form the subject of another composition are busy performing a ballet.

Roy Oxlade clearly derived much enjoyment from the physical substances from which paintings are made. He derived, even more, I think from a very personal sense of the ridiculous.