This show brings together two naturally collaborative counter-cultural figures with records of provocation in London, Berlin and New York: painter, writer and curator Rupert Goldsworthy and sound artist Mark Stewart, known as a collagist and pioneer of industrial hip hop.

‘I AM THE LAW’ is a total installation in two rooms: Stewart’s scrawled texts, some of them seeming to annotate various symbols which Goldsworthy monoprinted onto wallpaper-like hangings; a cuboid structure painted in Islamic-style patterning;  two wall paintings, one of which Goldsworthy made at the opening; several grids of found images and texts linked by such themes as devil-worship, bathhouse logos and sub-cultures; and some items of Stewart’s which looked to have been left scattered after a ritual rather than arranged – from signs promoting ‘GOD’ as a trademark to records and personal items. At first the look of the show seems mainly down to Goldsworthy, but Stewart is more than a catalyst and means of adding another layer to the pile-up of references, as the words are all his and he helped pick the two images that Goldsworthy then rendered as large murals.

So what does it all mean? If one theme holds things together, it’s probably Goldsworthy’s interest in the way symbols operate to represent what might be called ‘radical brands’ in a broad sense – from the Hells Angels to Islam to the National Front.  It’s obvious that both men are fascinated by a wide range of objects, expressions and designs, not excluding the criminal, fascist and otherwise unsavoury, and some of the show’s energy comes from their investigation into how these signs and logos clash together. That leads Goldsworthy to collect labels and stickers and take photographs of signs and monuments, combining them to emphasise the co-existence of opposing cultures in the same space: Prussian military history with new Moslem designs from Berlin, for example… Similarly, Stewart’s dystopian texts, hacked collages and ritual objects juxtapose charged subject matter: pentagrams and prison gates. 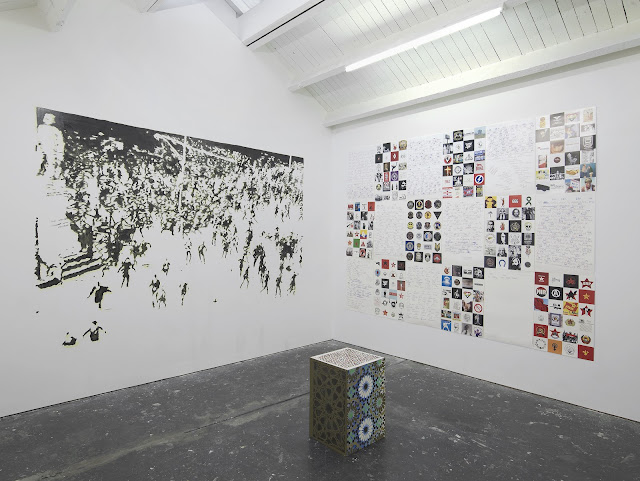 Such matters are explored more fully in Goldsworthy’s recently published “CONSUMING//TERROR: Images of the Baader-Meinhof”, a book on which he worked closely with Stewart, and which traces the visual history of the Red Army Faction (the West German terror group) and their logo. One of the main themes of the book is, Goldsworthy says, to ask how ‘outlaw’ or terrorist signs ‘establish themselves and operate as a heretical category amid a closely administered, legitimated, forest of signs’. This was the focus of his solo show at Ritter/Zamet last year, which featured large paintings combining incongruous categories – Nazi, gay and Chinese, for example.

Goldsworthy, then, focuses on the associative power of representation and how identities of “the forbidden” are constructed. Indeed, the symbols of seventies radicalism have much the same look as their racist counterparts, and the crude agitprop style of many of the underlying designs was emphasised by Stewart leaving behind a rudimentary hand-made printing block which was used to make the wallpaper works. One effect of this is to play on the semiotic point that word and object are not linked by logic but by convention, posing the question: are the linkages just as arbitrary in the world of visual signs?  Here’s where I feel a connection to Stewart’s words, which give the impression of being plucked at random for their sound and emotional effect, rather than for any conventional narrative purpose: thus do ‘frozen angels’, ‘cluster fuck of visions’, and ‘institutional deviance’ swim out the dense melange of his sheets of lyrics.

Elsewhere, two slogan-like phrases are particularly prominent: Stewart’s song title ‘As the Veneer of Democracy Starts to Fade’, as written across a painting of two menacingly carnivalesque figures appropriated by Goldsworthy; and ‘Obedience to the Law is Freedom’ on a sign across the top of a fenced-in prison on one of the wall paintings. That brings to mind both the Auschwitz slogan ‘Work Sets You Free’ and the use of language in Orwell’s ‘1984’. It’s power, not reality, which decides what words and images mean – though on the other hand, if ‘I am the Law’, as the show’s title would have it, then the obedience could be rendered benign through being founded on such subjectivity. The show turns around language’s role in the construction of power. 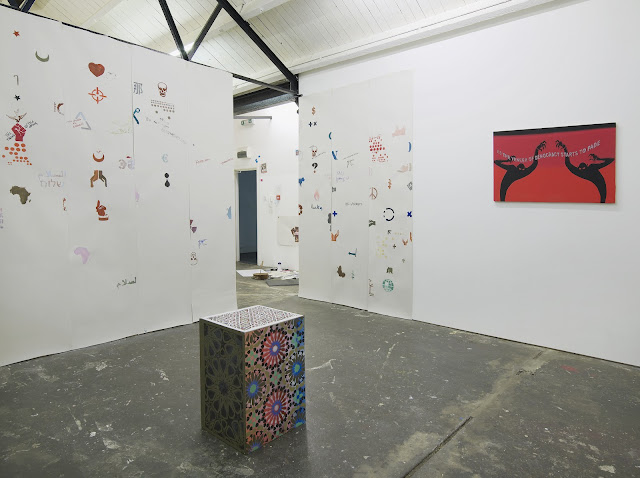 Visually, the most effective work was the second wall painting. It shows a rioting crowd, sourced from a photograph taken during the Irish civil war: another context in which belief may be thought to have trumped truth in the construction of meaning, and also drawing ambivalent associations with recent events in London and the Arab world. Goldsworthy combines a peculiar dark–green-over-lemon palette with astutely vague brushwork so that what is depicted seems out of register in the manner of a 3D photograph viewed with the naked eye. This makes the dense rear section of the crowd look like a dappled landscape until one reads back to it from the individual figures in the foreground, who’ve broken free. They feel like reasonable stand-ins for Goldsworthy and Stewart themselves, separating out long enough to provide a sense of how we’re manipulated before being reabsorbed into the protesting mass.

The exhibition  ‘I AM THE LAW’ runs until March 31st, when a closing party will double as a release event for Stewart’s forthcoming album ‘The Politics of Envy.’  Words/Photo Paul Carey Kent  2012