James Payne embraces the end of silence after months of lockdown in two new exhibitions: Ryoji Ikeda at 180 The Strand and Matthew Barney at the Hayward Gallery.

After months of peace and quiet, no noisy roads, no loud restaurants, no dark and dingy music venues and certainly no loud music, I had gotten used to silence and stillness. In terms of visual stimulation, the only screen I’ve looked at in months is this laptop.

That came to an abrupt end today, with the first show on the first day of the re-opening of museums: Ryoji Ikeda at 180 The Strand.

This show is everything lockdown wasn’t. It is extreme both visually and aurally. Huge screens, giant speakers, images cut up and put back together again, blasting sound, blinding light, pulsating computer-generated shapes, followed by pitch black and then flying moving floors.

When it was over, and I was ejected onto a London side street, my heart was pounding, my eyes were throbbing, and my ears were just confused. This is SERIOUS sensory overload. I actually felt physically sick (really).

It comes amid a slew of ‘experiential’ shows, the brilliant and unmissable ‘Current, Rising’ at the Royal Opera House, Yayoi Kusama at the Tate, and Matthew Barney at the Hayward (see below).

And then, of course, opening soon is the blockbuster “designed to stimulate your senses”, ‘Van Gogh: The Immersive experience’.

I saw the Van Gogh immersive experience in Paris and that show and Ryoji Ikeda’s are chalk and cheese. The Van Gogh is just a tame sound and light show that takes a great radical artist and turns him into a PowerPoint presentation. Whereas the Ikeda show is the real deal, a genuine ‘experience’, if you can call such an assault on the senses, that. It is in your face, up close, and it pulls your whole body into the sound and light. Now this, is an ‘experience’.

A long corridor takes you into the main part of the show. A corridor so brightly lit it was impossible to keep my eyes open for more than a few seconds. You genuinely are blinded by the light, and like everything here, it is utterly disorientating, but that’s the point. Six colossal Meyer SB-1 speakers hum away in the next room, getting progressively louder as you proceed down the corridor of light, and not for the last time, I thought of David Lynch. Later, you get to experience what can only be described as a black hole stimulation.

In total, there are twelve of these large scale multi-media works, which explore sound and light, using mathematics, digital technology and frequencies beyond the human ear. A brilliantly ambitious show from 180, not to be missed. 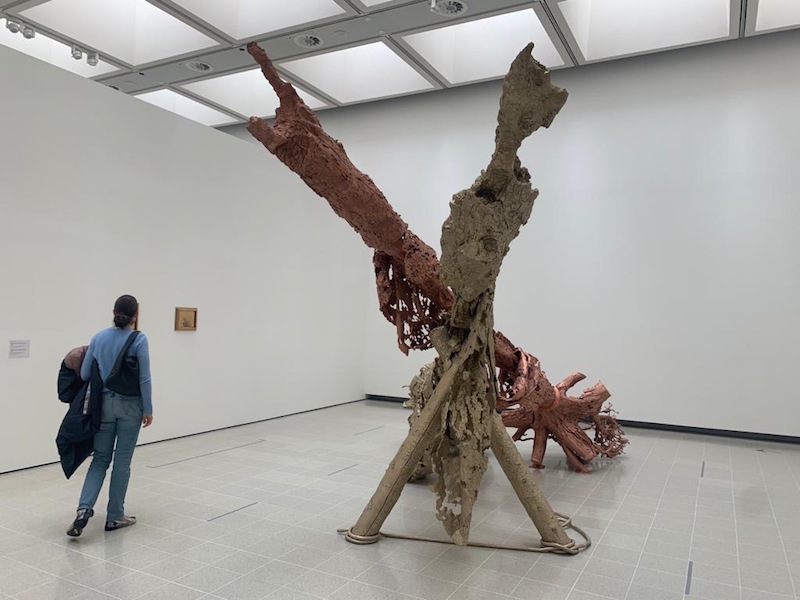 The Matthew Barney show at the Hayward, ‘Redoubt’, is a far gentler experience than the one at 180, but just as stimulating. Barney, famous for his ‘Cremaster Cycle’, here shows a film on the big screen that explores the eternal themes of humanity and how we fit into nature. This film is far less complicated (and lengthy) than ‘Cremaster’ but still a commitment at a dialogue-free, two and a half hours. As someone who has missed the cinema more than anything else under lockdown, I’m not complaining.

It is set in the wilderness of Idaho, and the ‘story’ is based around Ovid’s ‘Diana and Acteon’ with the woman playing Diana being a real-life sharpshooter and member of the NRA and Barney himself playing Acteon, as an artist named ‘Engraver’.

The film is beautifully shot, as you expect from Barney, and you do get involved in what is essentially a hunt, but it has to be said that it is achingly slow. The ending is not made for those of a sensitive nature, even if we are told that “no animals were harmed etc. etc.… “

Elsewhere in the galleries, objects from or inspired by the film fill the spaces, including Barney’s first outdoor sculpture. Forty engravings and electroplated copper plates, some of which Barney as ‘the engraver’ makes in the film, and these wonderful giant sculptures cast from sliced up trees harvested from a burnt forest to form rifles and exploding weapons of sorts.

These two shows tell us loud and clear that isolation and sensory deprivation are over, hopefully for good.