Mersad Berber was one of the very few artists from the former Yugoslavia who managed to acquire an international profile for himself. He had a big retrospective in Barcelona towards the end of his life. He had regular London exhibitions at the Albemarle Gallery situated in Mayfair, which has now changed locations to Chelsea and is now known as the Pontone Gallery. He became well known in the Netherlands.

This success was the more surprising because he belonged to a minority within Yugoslavia itself. He was a Bosniak Muslim, based in Sarajevo. He and his family got out of Sarajevo just in time, before the siege, which was a major event of the savage regional civil war of the 1990s. They settled in Croatia. Mersad had studios in Zagreb and Dubrovnik but was always regarded with a certain amount of jealousy by Croatian artists, because he was much better known internationally than they. He also, as things became quieter, continued to have a subsidiary studio in Sarajevo, which I saw when I visited him there some years ago. 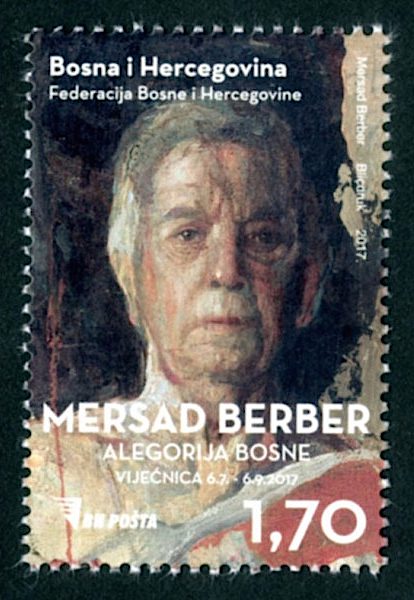 On this second visit, how things had changed and not changed! The old town of Sarajevo still had its slightly Middle Eastern, bazaar-like atmosphere. The big flat-blocks built by the Tito regime on the outskirts of the city retained their Grenfell Tower look, but none had recently been consumed by fire. Maybe a better quality of cladding. There were several luxurious new hotels. There were also many tourists, of different varieties. Exuberant Chinese taking selfies of one another on the river bridge close to the spot where the Archduke Franz Ferdinand and his wife were assassinated, thus triggering the outbreak of World War I. In nearby bazaars there wandered conservative Islamic ladies in full drag, shrouded in black, wearing face-veils as well as hijabs. For some reason, the city now attracts a lot of Muslim visitors of this conservative type.

The Berber retrospective I had come to see was the second show of its sort to be held since the artist’s death in 2012. An earlier one, entitled An Allegory of Bosnia, took place at the privately owned Pera Museum in Istanbul from February to May this year. The even more ambitious Sarajevo exhibition, held in the city’s recently restored City Hall, ruined in the siege, was a triumphant return to the place where Berber first made his reputation. It will be on view there until 9th September 2017.

In Bosnian terms, this is a very big deal. It has been marked by the issue of an official postage stamp, bearing a self-portrait of the artist. No such stamp has been issued here for the 80th birthday celebrations in honour of David Hockney, though Hockney got an equivalent retrospective show at Tate Britain, and, will soon have a permanent gallery devoted to his work in his native city of Bradford.

Berber will also get just such a gallery in Sarajevo after the City Hall exhibition closes.

The Berber retrospective in the Sarajevo Town Hall – replacing for the moment a lost library of around 2 million books, which once occupied the same building and were permanently lost during the siege – is a proud assertion of the value of regional cultures.