At first glance, the Sean Scully show that just opened at the National Gallery in London couldn’t be more different from the exhibition not far away at Gagosian Grosvenor Hill. It features just one artist, rather than a series of well-known names. The works on view are abstract, while everything at Gagosian is figurative. And, since this is a museum show, you can put away your cheque book. Nothing here is for sale – not directly at any rate, although if you fancied something it might be worth your while to ask Mr Sully’s London dealer, Blain|Southern, about availability and a price, although there is bound to be a waiting list.

Scully is a secret subversive – ELS

At a fundamental level, however, the two events have much in common. Here’s a famous artist offering you a portrait, not of his physiognomy, but of his innermost self. A mercifully brief but telling video, placed at the entrance to the exhibition, tells you exactly that – the main narrator is the artist himself. In it, he explains that the show stems from his admiration for two pictures in the NG’s permanent collection – a quasi-abstract seascape by JMW Turner, and a canvas by Van Gogh that depicts a simple wooden chair. He talks about waves and walls and windows, and about how these things, though not directly depicted, have played their part in prompting him to create what is now placed in front of you – freely painted designs of stripes and rectangles.

Scully is now in his early 70s, and he enjoys an almost uniquely prestigious position in the world of contemporary art. Born in Ireland, brought up and trained as a painter here in Britain, he is now an American citizen but still identifies, to some extent at least, as Irish. In recent years he has had an enormously prestigious series of international exhibitions: touring shows in China, major exhibitions in the grandest Russian museums. The paradox is that, while Tate Modern tends to favour dead artists (all three of the painters currently featured in monographic exhibitions there are dead) Scully at the NG, basically a temple to the great painters of the past, is still very much alive. You can push things further: he is an unrepentant white male, rather than being a female or ethnic minority. Or, preferably, so it sometimes seems where official galleries that feature contemporary art are concerned, a tactful combination of the two.

One reason for the wide dissemination of Scully’s work is its lack of overt political or even social content. This may account for the recent easy acceptance given to him both in China and in Russia. His art is very much of our time. But in one way it isn’t. Though it is extremely personal, it lacks any element of the direct social commentary that is becoming more and more the substance of contemporary art. Or, if it does have anything of that sort, then it is a message about trusting your instincts, about a process of evolving and seeking for your own verities – things that can’t be said in words, but only through paint. In that sense, Scully is a secret subversive.

There has been another film recently about Scully and his work, put out by the BBC. This has a feature that doesn’t make it into the one you will see at the NG. Never mentioned, but visible from time to time in the background, there were figurative paintings by the artist, recent ones. What they offered were images of a child, a young boy – Scully’s adored son Oisin, born when his father was already in his sixties. Oisin is named for the hero of an Irish legend. This hero was the son of the leader of a tribe called the Fianna, who lived in what is now County Kerry. Carried away to Tir na nOg, the mythical land of eternal youth, Oisin married a princess with golden hair and lived there happily for three hundred years before being seized with a great longing to return to Ireland. Which he duly did, with more or less fatal results.

Unstoppable: Sean Scully and the Art of Everything now available on BBC iPlayer 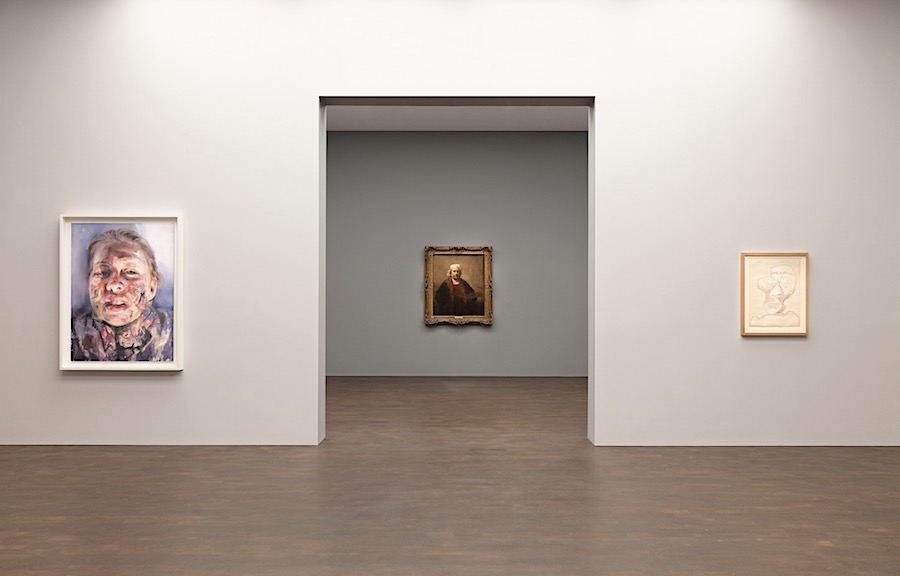 GAGOSIAN – Visions of the Self: Rembrandt and Now

The urge to try to place contemporary art on the same footing – and implicitly on the same level – as the masterpieces of the past currently proceed apace. The latest example is an ambitious show at Gagosian Grosvenor Hill, a space that is one of three operated by this major dealer here in London.

Many a museum would be happy to host this show – ELS

The show revolves around a major late Rembrandt self-portrait borrowed from the Iveagh Bequest at Kenwood, according to some accounts for a fee of £30,000. If it were ever to be for sale, this masterpiece would pretty certainly fetch a higher price than the dodgy Leonardo Saviour, bought by a Saudi prince and now mysteriously vanished from public view. Therefore both history and money preside.

Self-portraits by contemporary artists are now very much a thing. Some artists, chief among them Georg Baselitz, duly represented here, and Tracey Emin (who isn’t), seems content to produce little else.

The Gagosian exhibition is inevitably rather up-and-down in quality, and nothing comes near that wonderful Rembrandt, but there is quite a lot that is well worth seeing. Many a museum would be happy to host this show. Though some of us, myself included, might see an effort of this kind as a sign of the increasing desperation big institutions of this sort now feel to keep themselves in step with the taste of the much-coveted but increasingly elusive younger part of their potential audience.

There are fine works by Francis Bacon and Lucian Freud, a couple of Warhol Self Portraits, a photographic Self Portrait of Robert Mapplethorpe, deathly ill, holding a walking stick with a skull for a knob. There are the requisite works by female artists – Jenny Saville, Dora Maar, Diane Arbus. And there is the no doubt obligatory Jeff Koons – a lifeless photographic reproduction, full size, of a self-portrait by Rembrandt with a gazing ball fixed to its chest. This gazing ball is not the only mirror in the place. There is also a large Spiegel or Mirror by Gerhard Richter, nearly sixty inches square. In which you can admire yourself. Or adjust your coiffure or your flies: whatever you like.

Go to this show. It has a lot to tell about contemporary life. Not least because of what you will see when you gaze into Richter’s unsparing glass.

Visions of the Self: Rembrandt and Now – Gagosian Grosvenor Hill London Until 18th May