Since 1999, Sean Scully’s Landline paintings have led a transition from what John Caldwell called ‘the asceticism of his earlier black paintings’ towards the ’emotion, space, colour and physicality’ [i] of a more expressive style that has traced the world’s contours. As Scully says, ‘I change, of course, and hopefully expand’. In the Landline series, Scully seeks to paint his ‘sense of the elemental coming-together of land and sea, sky and land … the way the blocks of the world hug each other and brush up against each other.’ [ii]

Their colour bands formed of gestural brushstrokes navigating the rhythms of these elemental relationships and revealing the brilliant beauty of these interactions. The 12 is a new work, comprising twelve unique Landline paintings, each with its own distinct personality ranging from spirited to sombre. This grouping, presented in its entirety for the first time, is a lyrical expansion of the series that endeavours to “integrate all the parts” of the horizon – physical, philosophical, poetic and pastoral.

The new works for this exhibition have been created in the world in which we currently live, with ‘the existential threat from COVID and the environmental problems we face’ each of which has influenced Scully greatly in his art. A second significant multi-panelled painting entitled Dark Windows (2020), a suite of works created during some of the bleakest days of the COVID pandemic, also features. In Dark Windows, the haunting, sinister presence of a black square lurks on the surface of Landline paintings, dislocating the harmony and simplicity of their form. The advent of the Dark Windows paintings is described as referencing the nihilistic declaration made by Kazimir Malevich in 1915 and representing the first time in Scully’s career that his horizons have been entirely blackened or effectively erased. The refusal of this opaque viewfinder to reveal anything beyond is viewed as a moment of rupture in Scully’s own career, wilfully severing or ‘disbanding’ the horizontal continuity of his ongoing series of Landlines, signalling a pause or a disconnect with the natural world. 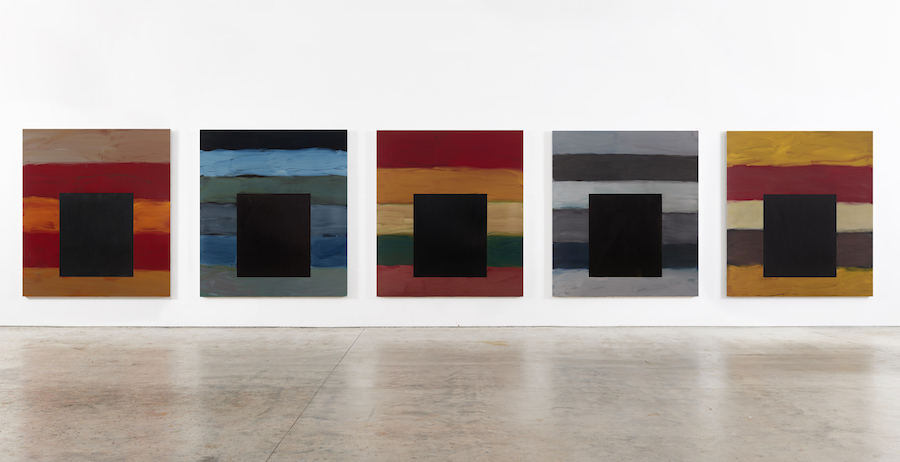 Scully has said that ‘if you have Matisse, Mondrian, Rothko, then you’ve got my work’ [iii] yet his linear bands reverberating through his expressive paint application also continue an aesthetic dialogue with hard Abstraction, the squares of Kazimir Malevich, the hard edges of Ad Reinhardt,[iv] and the ’emotional power’ of Frank Stella’s black paintings.[v] This dialectic is not one that fully explains or contains Scully’s entire oeuvre, particularly as he has said, ‘I feel that Picasso has become a stronger partner to me lately’. That is because of Picasso’s openness, an approach which of importance to Scully too. The problem he sees with Reinhard and the other extreme abstractionists is that ‘they don’t show everything or both sides of the argument’.

His paintings, by contrast, ‘are dialectic, as am I’. He likes the term ‘reckoning’, is ‘a a fusionist’ and has ‘also said we should be druids’. Yet, within the dialectic I am proposing, the chapels and paintings of Matisse and Rothko move his work towards one conception of the spiritual while the black paintings of Malevich and Reinhardt move his work towards another. Understood in this way, Dark Windows may represent a different form of disconnect, which nevertheless reconnects with his exploration of spirituality.

The Matisse, Mondrian, Rothko matrix sees Abstraction as ‘a non-denominational religious art’ which is ‘the spiritual art of our time’ because it is about ‘an opening up’ which has ‘the possibility of being incredibly generous’ and ‘out there for everybody’ as ‘the viewer is free to identify with the work.’ Scully’s human idea of spirituality ’embodies an acceptance of imperfection’ and ‘incorporates it in a built-up, imperfect surface surrounded by complex and uncertain edges’ revealing spirituality as ‘already in us,’ that something ‘that accompanies what we already are, humanistic and complex.’ [vi] In searching for a more human and spiritual dimension, he began to look ‘for a synthesis between colour learnt from nature and cultural memory, as if bridging the divide and going back in time to Cimabue and Velazquez.’ He sums up his ambition in this regard as trying to ‘express light, and express hope’, believing that ‘in the end, a ray of light will shine through.’ [vii] In his work for the sacred spaces of Santa Cecilia in Montserrat and San Giorgio Maggiore in Venice, there has been a gathering of the walls of light that are formed by the bands of colour in his Landline paintings and installations such as Opulent Ascension.

The Malevich, Reinhardt, Stella matrix draws in the first instance on the theology of icons. Malevich’s Black Square was ‘non-objective, meaning that it did not merely represent reality but was reality because there ‘nothing in it by which it could be identified as being separate from the infinity of reality.’ [viii] Malevich stressed that Suprematist forms ‘will not be copies of living things in life, but will themselves be a living thing.’ [ix] This was an ambition drawn from icon writing, as icons are believed to participate in and transmit the divine reality they portray. Malevich signalled this connection by hanging Black Square high up on the wall across the corner of the room at The Last Exhibition of Futurist Painting in 1915; this being the same sacred spot that a Russian Orthodox icon would sit in a traditional Russian home.

In addition to connections with icons, Malevich’s Black Square also relates to the apophatic tradition within Christian theology and spirituality in its non-objectivity through which it becomes the infinity of reality. Apophatic theology argues that we come to know God most fully by moving beyond all human descriptions, images or conceptions of God. Ad Reinhardt, the lifelong friend of the Trappist monk Thomas Merton and the poet-hermit Robert Lax, began to devote himself exclusively to black paintings from the mid-1950s. These ‘encompassed the contradictions inherent in plenitude, which is a kind of emptiness, and negation, which is a kind of affirmation.’ Underlying the black paintings was ‘the idea of the Void, the field in which action and inaction are one, and which holds in perfect equilibrium these apparent opposites.’ ‘Reinhardt’s notion of emptiness that is fullness, and of darkness that is light, was informed by his readings in both Asian and European mysticism, which left traces in his notebooks that ranged from Lao Tzu’s “The Tao is dim and dark” to Meister Eckhart’s “The divine dark.”‘ Like Malevich, ‘Reinhardt was deeply engaged by how it might be possible to give hidden forces a kind of visible form, that was—like the forces themselves—both present and not quite visible: “Awareness of hidden things, look toward what is hidden . . . Intangible, invisible, illimitable.”‘ [x]

By placing a black square over Landline bands of colour, Scully brings both approaches to spirituality together; an integration of affirmation and negativity, the cataphatic and the apophatic. This might be a response to Frank Stella’s argument in his Charles Eliot Norton lectures that painting needed to ‘absorb a Mediterranean physicality to reinforce the lean spirituality of northern abstraction pioneered by Mondrian and Malevich.’ [xi] It may be a similar synthesis to that found at Santa Cecilia, where his walls of light interact with Holly, his abstract Stations of the Cross, and Doric Nyx, a painting in ‘dark shades of grey’ ‘named for the Greek goddess whose dreaded apparitions only came at the darkest hour of night’ that ‘conveys a sense of fate, of a life sentence without appeal.’ Paul Anel writes that, with this work, ‘Scully introduced into the chapel the darkest hour of his life: the death of his nineteen-year-old son Paul in a car crash in 1983 in London.’ Yet, ‘”Tragedy is part of spirituality,” he commented, standing next to Doric Nyx at the press conference on the inauguration day,’ [xii] an echo of his statement to Maria Lluïsa Borràs that ‘I am not drawn to tragedy: I believe that it is always possible to overcome it and that in the end, a ray of light will shine through.’

The Dark Windows are a further meditation on tragedy. Scully says: ‘There is no doubt that they are a response to the pandemic and to what mankind has been doing to nature. What really strikes me as tragic is that what is a relief for nature is a torment for us. And what is a pleasure for us is a torment for nature. That seems to be the conundrum that we’ve got ourselves into.’ This new body of work serves as a reappraisal or a reckoning – not simply suggesting that while the dark clouds hover and we remain in darkness, the blight will soon be over, and the world will heal itself – rather the realisation that a ray of light will always shine through the darkness or, perhaps, as was the practice of Pierre Soulages, that light will be reflected from the black.

[iv] ‘Sean Scully and His Spiritual Approach to Abstraction’ – https://www.phillips.com/article/41249958/sean-scully-spiritual-abstraction