Painting, sculpture, architecture: here is a triumvirate wherein painting and sculpture remain in commanding dialogue with architecture throughout the impressive output of Sean Scully, as exemplified in the exhibition titled INSIDEOUTSIDE currently on view at the Villa Waldfrieden and the Cragg Foundation Sculpture Park in Wuppertal, a city that is located about twenty miles to the east of Düsseldorf and is renowned for its verdant, spectacular parks. 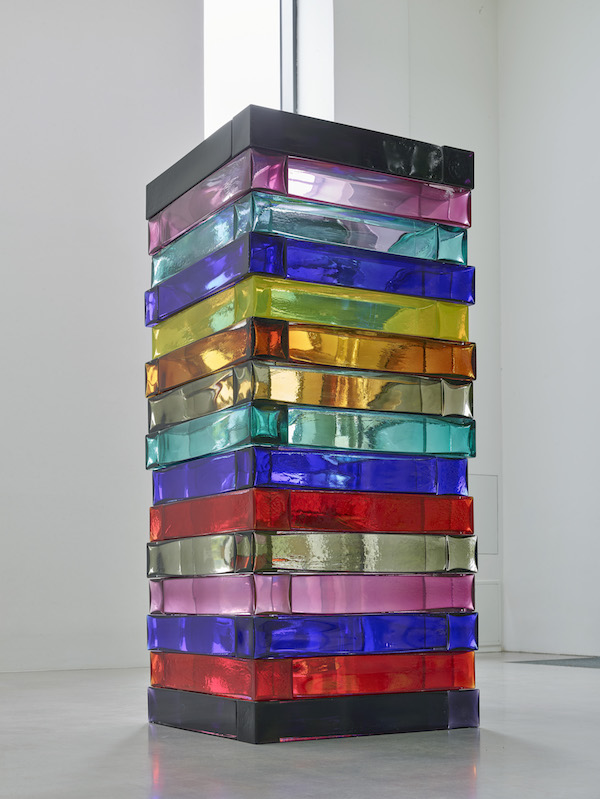 Consisting of a compilation of eleven horizontal parts of Murano glass, Stack is a cubic monument slightly less than nine feet high, whose void interior functions as a receptacle of light. Executed in 2020, this non-representational sculpture visually unravels a magnificent orchestration of aspects of luminosity, architecture and nature through its translucent colouration and vertical structure. The simultaneity of rigour and improvisation on Scully’s part gives way to rhythmic manifestations, whereby the viewer is alerted of degrees of radiance and opacity based upon the phenomenon of the colour of a given slab of glass. Refraction, reflection, and absorption of light, along with the interior and exterior spaces of the sculpture and those of the gallery, become optically conglomerated within Stack, as much as the linguistic categorisations of craft and art have become luxuriously integrated.

While an increased awareness of the body within its milieu is large-scale sculpture’s operative characteristic, Stack reformulates that sentience through its ever-shifting chromatic luminosity, amplifying the alterations due to one’s perspectival shift that in turn heightens the observer’s awareness of the temporality of vision. However, the beholder’s mind may attempt to distil each row of colour based upon its primary pigment, the eyewitnesses an ever-changing multiplicity of colours that contravenes language. We are here reminded of Paul Cézanne’s phenomenological discourse when he wrote to Émile Bernard in 1904: “Here’s something that can’t be disputed. I’m quite sure about this: an optical sensation is produced in the visual organ that makes us classify by light, halftones or quarter tones, planes represented by colour sensations. So light doesn’t exist for the painter. As long as we’re forced to go from black to white, the first of these abstractions being something like a point of support as much for the eye as for the brain, we flounder, we don’t manage to attain mastery, to possess ourselves.”[1] 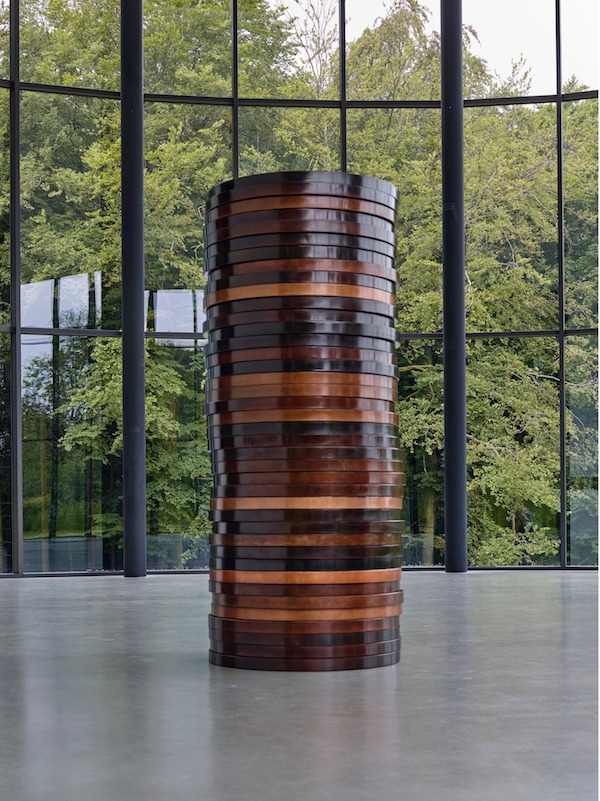 Conveying at once the impression of a four-sided “painting” and an architectonic manifesto of chroma, this polychromatic edifice registers as a symphony of altering colouration that calls into mind the stained glass windows of Gothic cathedrals, where the transience of light momentarily takes on metaphorical significance of the ontological, if not transcendental. Both aesthetically and cerebrally charged Stack, recalls the incisive remarks of Hubert Damisch on the history of stained-glass windows in relation to painting: “The stained-glass window was quite literally the first painted window, but one that, it must be said, was designed not to allow the view to open up onto the beyond, but rather to play with and make the most of the light that passes through it.”[2]

Within the context of the Villa Waldfrieden’s glass-walled architecture and its regular hosting of chamber music concerts, films and lectures, this sculpture of Scully resplendently conjures up features of the concept of Gesamtkunstwerk (that of a “totality” within a work of art), as formulated by the architect Walter Gropius through Bauhaus principles in Weimar at the beginning of 1919. By 1923, László Moholy-Nagy, Vasily Kandinsky, Oskar Schlemmer, Paul Klee and Lyonel Feininger would integrate their modernist sensibility of imagery and architecture, as manifested in such works as The Steamer “Odin,” II (1927) of Feininger or Bauhaus Stairway (1932) of Schlemmer, both currently within the permanent collection of the Museum of Modern Art in New York. In these paintings, the presence of the grid is characterised through the handling of colour that is all but monochromatic, indicating luminosity, reflection, absorption and refraction as phenomenological instances of the visually experienced world. As both of these paintings brilliantly incorporate abstraction within the representation of human forms inhabiting architectural spaces, Scully’s Stack articulately encapsulates that Bauhaus spirit through the medium of glass, rendering his aesthetic syntax of abstract sculpture and painting continuities within the realms of space, light, colour and perception.

Yet apart from the Bauhaus, Scully’s interest in the grid is highly influenced by Moroccan culture, whose carpets and architecture have become closely tied to his practice since the early 1970s. Indeed, Grid (1972-2019), a wall-mounted piece consisting of felt and aluminium, in proximity to Stack, is a superb case in point. Here the highly exposed aluminium framework acts as shallow scaffolding for vertical strips of felt in such colours as black, grey, burgundy and light blue. This relief sculpture unfolds itself across the visitor’s field of vision as a tapestry of art-historical, theoretical and intuitive vectors. Scully probes the concept of the material support of paint to the extent that is at once extreme and subdued. While Grid can be read as a simultaneous metaphor and metonymy of the weft and warp of canvas, since the function of the stretcher is unmistakably manifest here, the work is imbued with a visual lyricism that defies the closure of meaning. It is as if the horizontal, orange strips upon the lower-left section of Grid are metaphorically annunciating “impasto” and “gesturality” upon a geometrised framework. Indeed, it is this dichotomy of the expressionistic and geometric that has characterised Scully’s unprecedented visual language over the past half-century or so. 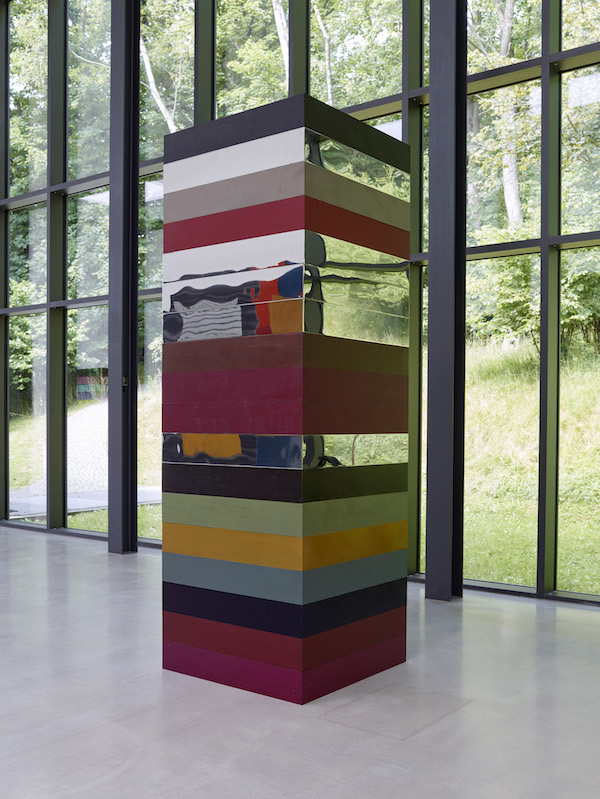 Landline Cubed, dated 2015-20, continues sculpture’s varied conversation with light through its highly polished stainless steel “boxes” assembled with coloured ones, yielding a nine-foot pedestal acting as support of formalistic concepts. Although at the same time, its specular cubes generate mirror images of the itinerant observer, interior and exterior in a temporal manner, the matte cubes diffuse reflection. The coloured surfaces here remain relatively indifferent to the temporality of their surrounding forms, including that of the idyllic, exterior space that is visually conditioned by the passage of time and seasonal effects. In this manner, Landline Cubed manifests the dialectic of the optical and tactile, of the temporal and atemporal. This dialectic, in essence, parallels Scully’s practice that is based upon such binaries as vertical/horizontal, linear/painterly and composition/execution. In turn, binary exchanges are manifestly evident in the mammoth painting titled What Makes Us, dated 2017-18, where oil, oil pastel and acrylic spray paint transform the aluminium support into a poetic visual field. This majestic, mural-sized painting conjures up geometric patterns of textiles or tapestry of numerous cultures, such as those of Moroccan rugs, Navajo designs or Mexican fabrics, along with innumerable design patterns of Western culture, reformulated here through the medium of painting.

Despite their differences in materials, processes and ensuing aesthetics, there remains a formalist congruity throughout the paintings and sculptures on view: it is the presence of the five geometric, aluminium insets in What Makes Us that we can read as Scully’s adamant aesthetic scheme of virtually integrating the fundamental contrariness of the legacies of Abstract Expressionism and Minimalism. This painting testifies to Scully’s credo of artmaking as a cultural enterprise that in one way or another retorts to the aesthetic currents of one’s time, resourcefully shifting their underlying premises toward an individual and persistent trajectory.

The bronze sculpture titled Coin Stack 2, dated 2020, eloquently pairs the geometric form with the not-so-geometric one through its overall columnar silhouette that is, in fact, a heap of forty circular modules. Through the ongoing shift of the central axis located within the hollow, interior space of Coin Stack 2, the sculpture evokes Jacques Derrida’s questioning of the “truth of pure space” when he writes on Edmund Husserl’s idealisation of geometry that is set apart from experiential reality: “Mathematical space no longer knows what Sartre calls ‘transphenomenality.’ The developments of mathematical space will never de jure escape us: that is why it might seem more reassuring, more our own. But is that not also because it has become more foreign to us?”[3] The cylindrical modules of the decentralised Coin Stack 2 rhythmically impart exchanges between the geometric and not-so-geometric, between uniformity and alteration, individuality and repetition, reflection and absorption, interiority and exteriority, thus articulating form as an inherent dialectic within Scully’s aesthetic route. 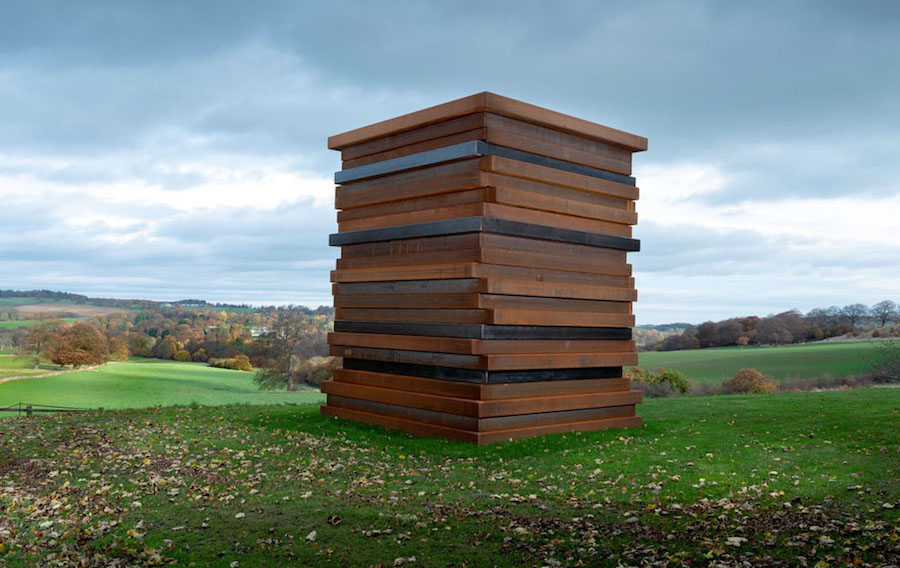 “Inside and outside are inseparable. The world is wholly inside and I am wholly outside myself,” muses Maurice Merleau-Ponty.[4] Outdoors, within the Waldfrieden Sculpture Park, Scully’s seemingly impermeable, corten steel sculpture titled Moor Shadow Stack, dated 2018, is indeed in perpetual dialogue with earth, rain, air, atmosphere and light, admissible within its relatively invisible interior space. That space awaits to be grasped through the observer’s perspectival shift to an aerial point of view or by means of intuitive apprehension. As Merleau-Ponty artfully notes in his discussion of the Cartesian cogito, “unless I have an exterior others have no interior.”[5] Through its compound title, INSIDEOUTSIDE inventively articulates the formal parameters of the interior and exterior sculptures on view, since the title confirms a given sculpture as an allegory of architecture. In turn, Grid and What Makes Us, along with 12 Triptychs (2008) and five works on paper, present themselves as pictorial renditions of Scully’s architectonic vision. The sculptural and painterly languages of Scully can, therefore, be read as extensions of each other, implementing geometric rhythm as a point of departure, only to masterfully upend that tautness through coruscating dances of materials, colour and light that notably integrate restraint and splendour at the Villa Waldfrieden and its exquisitely landscaped parkland.