From Selfie to Self-Expression at the Saatchi Gallery represents a return to form, after a recent series of dead-on-arrival exhibitions held in this space. It’s good to be able to say welcome back. This is clearly going to be a very popular, much-visited event. Popular not least because it is excellently timed. The ‘selfie’, or self-portrait photo, has become a major phenomenon in contemporary society. It asserts ‘I was here.’ Better still, it proclaims ‘I was at the centre of the action’ or ‘I was there, standing right beside this or that famous person’. It’s telling that the show is sponsored by Huawei, a maker of mobile phones – such phones now being the preferred tool, both for making selfies and for sending them out to a maybe interested audience.

The question is, of course, whether the selfie has any chance of becoming a serious form of art, rather than simply a phenomenon linked to ever-increasing levels of contemporary narcissism? An increase that, in turn, offers a rather depressing commentary on the kind of society we now all of us inhabit.

The Selfie show does its best to make out a positive case. The first galleries you enter are hung with self -portrait images made by the great masters of the past, with, in addition, some by big names from the almost-present; Warhol, Basquiat, Chuck Close, Lucian Freud. Almost the only obsessive self-portraitist from this senior generation whom one might have expected to meet is Baselitz. I’m sure they must have tried to get him. 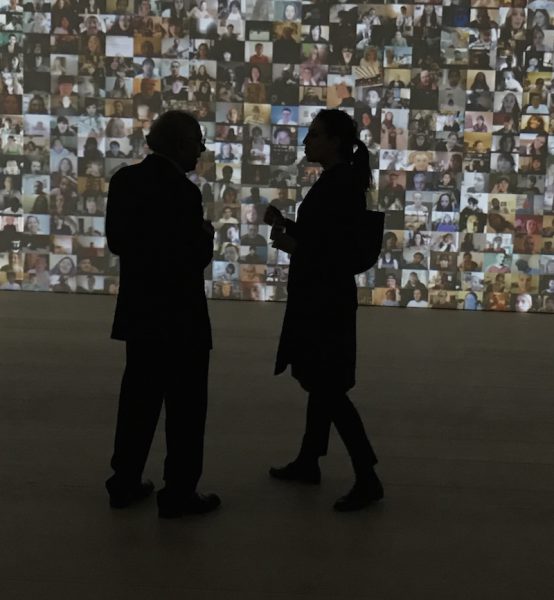 It is, however a feature of the exhibition that almost none of the artists are shown in the original. What you get is an array of reproductions. About the only ‘originals’ in the old sense of view are a few scattered sculptures – one by Gavin Turk, recently seen at the Newport Street Gallery; two more by Tim Noble and Sue Webster. Much of the rest doesn’t have much pretention to be art, in any conventional sense. In fact, it’s better to think of the whole thing as being one huge artwork in which all participants, including yourself as you move around it, are subsumed. Tate Modern, eat your heart out – this is real populism, much more so than a few spaces condescendingly devoted to ‘performance art’.

In many of the galleries at Saatchi – for example in the main space at the back of the ground floor – you are confronted by a great mass of changing images. Many too many for it to be possible to focus on any one image in particular. What this mimics is the way that contemporary urban life simply washes over you. You bathe, or perhaps you drown, in the relentless flow,

Upstairs, in the corresponding large space on the first floor, there is a room full of constantly shifting black and white projections, where you very soon realise that you yourself have become, though temporarily, part of the show.

If you can put up with the lack of anything much that can be described as art in any traditional sense of that term, the exhibition is a triumph. It touches directly on so many themes that are relevant to the kind of society we have now. It’s not just that it caters to, and gleefully riffs on, aspects of modern narcissism. It is also that it is, in both a literal and a metaphorical sense, a hall of mirrors. Don’t kid yourself that you are in any way cleverer and more sophisticated than the organisers. One naughty clue to this is the catalogue, which most self-enraptured viewers probably won’t bother to buy.

At first glance, it looks as if it is the wrong way round. The title of the show and the sponsor’s name are on the back. The front cover is just a smooth mirror surface, no lettering of any kind. You gaze at it with some initial puzzlement and what do you see? Yes, just a little blurred, a shifting image of your bewildered self.

From Selfie to Self-Expression, Saatchi Gallery Until 30th May. Free entry.