In Europe and the US, the period following the Second World War was a time of impassioned artistic activity in which a modernist preoccupation with religion and spirituality was apparent. In particular, the image of the crucified Christ became, for many artists, synonymous with the suffering endured through World War II, most substantively in the Holocaust. The Australian modernist Sidney Nolan was among those responding in this way, but his responses have remained unseen and unappreciated within his archive until very recently.

While researching a series of portraits and animal paintings created by Nolan following a journey through Africa that began in the autumn of 1962, former soldier and collector of Nolan’s work Andrew Turley also discovered more than 100 works on paper from 1961 that depicted victims of the Holocaust as well as Adolf Eichmann, who at the time was facing trial in Israel. Nolan had made these works as he was preparing to visit Auschwitz, which he did in January 1962 together with Al Alvarez, friend and poetry editor of The Observer. 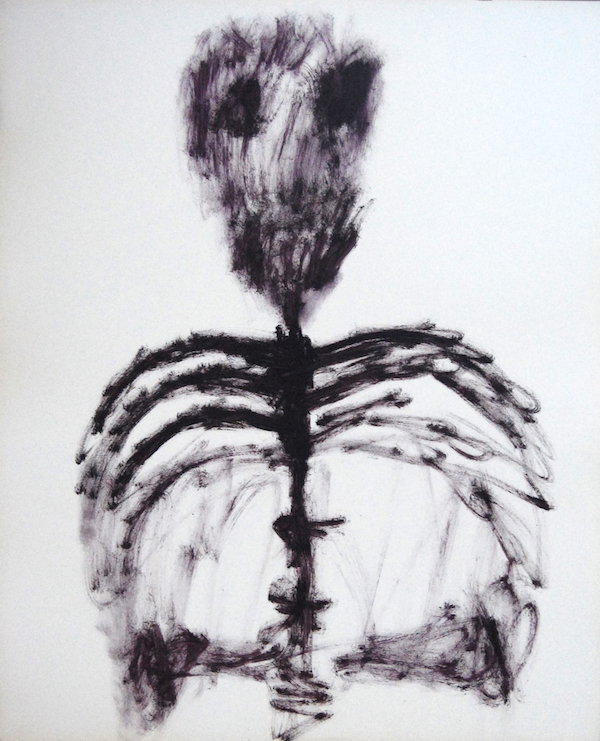 Nolan had been commissioned to illustrate the article Alvarez was to write about the trip but, in the event, found the visit so disturbing that he was unable to produce any images and sublimated his distress into images made during his subsequent African trip. He wrote: “I am reluctant in a way to dig deeper into Europe, but I do not see how the question of the camps can be forever shelved. Perhaps they will never be the material of art, it is impossible to tell. How can a disease be painted?” The Eichmann and Auschwitz works were never shown, except for one which was reproduced by London’s Marlborough Graphics in 1967.

Following their rediscovery by Turley in the Nolan archive held in Melbourne, a selection of these works will be shown by the Sidney Nolan Trust in their freshly updated gallery space, The Rodd in Presteigne. Thirty works will be presented together with previously unseen photographs that Nolan took when visiting Auschwitz with Alvarez and other sources of reading on the Holocaust drawn from Nolan’s personal archive.

In typical Nolan fashion, as an artist who often painted in series, he worked with great intensity in this period, his style allowing him to quickly generate hundreds of works on paper, often tens of dozens created in a single sitting, each a subtle yet entirely purposeful variation on the last. This new body of work was initially prompted by the public trial of Adolf Eichmann, the Nazi responsible for the deportation of Jews from across Europe.

Turley has described the sequence: ‘… between 27 November and 10 December, in the two weeks before Eichmann’s judges passed sentence, he filled sheets of paper with the same face and featured over and over again – recording ‘‘do 50 today’’ on one day alone. Some were simple outlines, others fully formed, but every image had the same broad forehead, receding hair, thick rounded glasses, thin lips, and in most, a collared shirt buttoned to the top. All mirrored photographs of the notorious prisoner.’[i]

Then, following Eichmann’s sentencing, Nolan switched from these portraits to dozens of paintings of camp prisoners, to increasingly skeletal figures, as well as smoking crucifixes:

‘[He] switched from Eichmann’s face to painting more than a hundred images of Auschwitz and concentration camp inmates, keeping them with the Eichmann portraits in a folder he titled ‘‘Judges and Victims’’. There were three distinct groups, dated roughly six days apart. The first was characterised by prison stripes – faces sliced by bars or vacant eyes above vertical stripes of the camp uniforms. The next group were wreathed in smoke, which suddenly cleared to expose harsh heads scratched from paint with screaming mouths. Finally, there were skeletal heads tortured and twisted. The evolution was clear and their titles unequivocal: Head of Prisoner Concentration Camp and Skeletal Head in a German Concentration Camp. 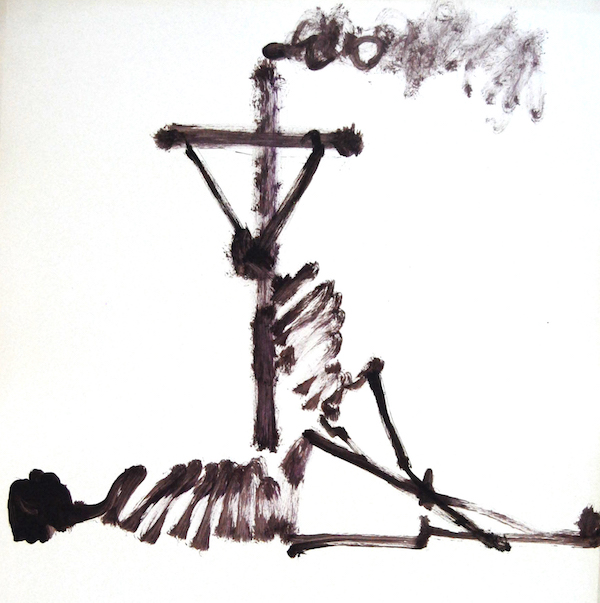 Nine days passed in peace. Then suddenly more images poured out, a tortured stream of figures crucified on smoking crosses, skeletons overflowing wheelbarrows and bodies laid out in neat rows of death.’[ii]

Then he left for Auschwitz. Nolan was an artist for whom the expression of emotion and the emotional impact of his work was key. He said: “I’m very interested, in fact, compelled and dedicated to transmitting emotions and I care for very little else. I care for that process so much that I’m prepared to belt the paint across the canvas much faster than it should be belted, I don’t care so long as I can get the emotional communication, I will sacrifice everything to it – and this I’ve done.” The emotions of Auschwitz were so deep and so strong, however, that they essentially overwhelmed him with the visit triggering ‘an unexpected and lasting retreat from any direct Auschwitz imagery.’

Yet, for that brief period between the Eichmann portraits and his leaving for Poland, Nolan joined Francis Bacon, Romare Bearden, Marc Chagall, Abraham Rattner, Graham Sutherland, and others in finding the image of the crucifixion to be a visual and emotional equivalent to the suffering imposed and endured in the Holocaust.

Nolan had first worked with religious imagery in the summer of 1951 and 1952 when he created a series of seven religious paintings, including Flight into Egypt and St Francis receiving the stigmata, all intended for a future exhibition that was never realised and some for the Blake Prize exhibition of 1952. The series was inspired by a European trip on which he realised ‘that the painters who moved me most (El Greco & Giotto) seemed men primarily of faith.’[iii] Nolan, therefore, joined artists such as Arthur Boyd, Bernard Buffet, Eric Gill, David Jones, Colin McCahon, Georges Rouault, F.N. Souza, Stanley Spencer, and others in expressing a modernist preoccupation with religion and spirituality in this period. Nolan’s Auschwitz paintings are among the rawest expressions of the unredeemable horror that was the Holocaust.

Andrew Williams has written of Jewish crucifixion imagery after the Holocaust as Christological imagery that has ‘been freighted with meaning connected with collective suffering, personal grief and divine abandonment.’ Nolan’s Auschwitz paintings are freighted in a similar way. Williams concludes his article by saying that art which is encountered on that basis ‘is never straightforward and is often disturbing for it has confronted the pain of experience, the responsibility of the church and the darkness of divinity.’[iv]

[i] ‘Shaken to the core: the untold story of Sidney Nolan at Auschwitz’ by Andrew Turley, The Sydney Morning Herald, 15 January 2021 – https://www.smh.com.au/culture/art-and-design/shaken-to-the-core-the-untold-story-of-sidney-nolan-at-auschwitz-20210108-p56spf.html. An adapted extract from Andrew Turley’s upcoming book, Nolan’s Africa.

[iv] ‘The church’s reception of Jewish crucifixion imagery after the Holocaust’ by Andrew Williams, AGON No.48, 4/2015 – http://agon.fi/article/the-churchs-reception-of-jewish-crucifixion-imagery-after-the-holocaust/