In present circumstances, both public and private galleries have had to think hard about what is practical and within their reach to do. Sometimes they come up with curiously similar solutions. This is the case with two shows that have just opened in London – one at the National Gallery and the other at Colnaghi in St James’s.

The NG exhibition is the more modest of the two. Situated in a ground floor space, close to the bookshop and the exit into Trafalgar Square, it is called Sin and at the entrance there is a large notice, instructing one to ‘Repent and Sin No More’. Through the doorway, you can see the famous Bronzino from the gallery’s permanent collection, which shows Cupid lasciviously kissing the lips of a nude Venus. Go at little further in, and you find that Bronzino’s painting has been paired with a neon scribble by Tracey Emin, which half-heartedly protests: ‘It was just a kiss’. The Emin, however, is just one of only two contemporary works included. The other is a less than life-size statue by Ron Mueck, depicting a young black man raising his t-shirt, to display a wound in his side. The wound is in about the same position as the wound in Christ’s side made by the centurion’s lance, which features in many portrayals of the Crucifixion. 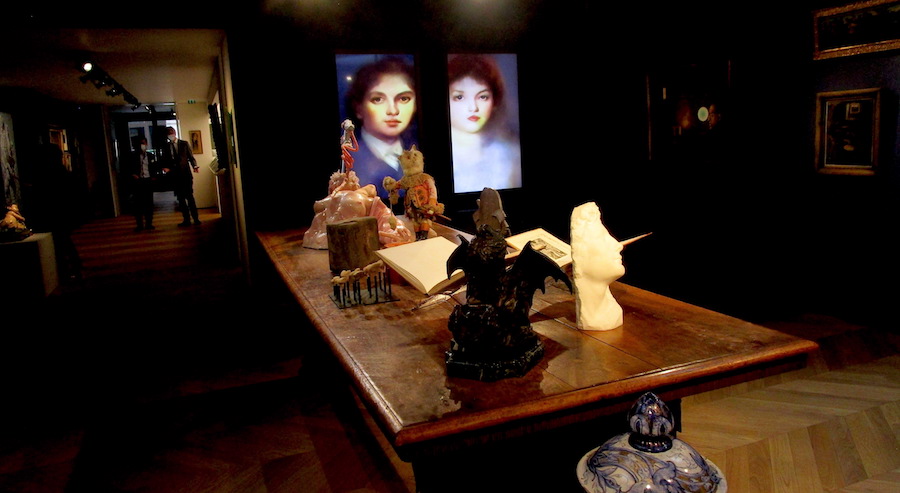 All the other works on view come, like the Bronzino, from the NG’s permanent collection. More often than not they offer incidents from the Bible, though there is also a scene from Hogarth’s Marriage-A-la-Mode series, which narrates the breakdown of a union made, not for love but for money. Throughout the choice of pictures, there is a powerful echo, not merely of Sin, but of Christian guilt. Altogether a suitable theme for a national institution struggling in the midst of a pandemic.

The show at is much bigger, less focused and more various. Entitled Dreamsongs, covers a much wider variety of themes. It illustrates how much things have changed since the days when this was a rather staid, much-respected outfit dealing in Old Master paintings and drawings – nothing else. The exhibition makes a fascinating but somewhat confusing visit, mingling things that are more or less immediately recognisable – a Durer print, a Fuseli painting – with things that certainly aren’t. Sometimes these unexpected items are quite old – an anonymous Flemish painting of c. 1500 showing Christ with three interlocking heads (to represent the Trinity), or a series of allegorical paintings by a Brescian Painter of the late 17th/early 18th century known only as The Master of the Fertility of the Egg. One of these shows a robed figure with the head of a black pig, stirring a large pot of polenta. ‘Salvador Dali, eat yer heart out!’ And yes, while I think of it, Dali himself is also represented in the show, though only with a very minor work. This exhibition, in its deliberate disorder, seems to reflect the extraordinary moments we are now trying to live through. Both shows resonate much more meaningfully – or so I feel – than the swaggering displays once offered to us by museums – and, yes, also by big-name contemporary galleries – in that lost far-away time before the pandemic.