Two shows have just opened at major London institutions –Sorolla at the National Gallery and Mike Nelson at Tate Britain. Different as they are, they both give one cause to reflect on the current situation in British art. Indeed, about what is happening to British culture in general.

Sorolla was more important for his way of seeing things, rather than for who he chose to depict – ELS

Joaquin Sorolla y Bastida (1863-1923) – to give him his full name and dates – was a big deal in his own day. A big success both in continental Europe and in the United States, but never a big deal in Britain. He is represented by just one work in a top-of-the-line British public institution: a slightly podgy portrait of a minor royal, Princess Beatrice of Battenberg, tiara on the head, which belongs to the National Portrait Gallery. It is not included in the current NG show.

Sorolla at the National Gallery

The subtitle of the exhibition is ‘Spanish Master of Light’, which tends to suggest that Sorolla was more important for his way of seeing things, rather than for who he chose to depict. This is true up to a point. He was certainly a very skilful user of paint. He belongs to a group of not-quite-major, hugely successful in their own day, European painters, the expatriated American John Singer Sargent among them, who enjoyed colossal success in the closing years of the 19th century and the opening years of the 20th. If flash and dash is what you like, Sorolla has plenty to offer. I went to the NG on the morning that the show opened to the general public, and the galleries were thronged. It’s hard to think of any painter working today who is such a virtuoso – there is much here to enjoy.

It’s only when you look again that certain slightly disturbing elements appear. In the earliest part of his career, Sorolla was a painter with a social conscience -something that would make him sympathetic to the British art world as this is trending now. At the beginning of the show, there are big, assertive paintings about the poor and dispossessed. One, titled And They Say Fish is Expensive!, shows an injured fisher-boy being tended by two older men in the hull of a fishing boat. Another, Sad Inheritance!, depicts some crippled boys, some lame, some blind, on a beach, being tended by a benevolent priest.

Gradually Sorolla moves out of this phase. He paints the members of his own family. He paints portraits of people of his own class or a bit further up the scale. He moves into making a long series of works, now immovably in the New York home of the Hispanic Society of America, of Spanish people in regional costumes. There are studies for them here. There are also jolly seaside scenes with no particular social message. One of two of these features naked little boys, which might, if shown as the work of an absolutely contemporary artist, cause some concern today in our era of returning puritanism, but which certainly didn’t bother anybody when they were first exhibited. “What cute little working-class kids!”, would have been the reaction.

Only rather gradually does it dawn that these are images about them, but also – thanks to the passage of time – about us. What distances today’s spectator from what is shown is an immense gulf. We are shown a world where things may have looked more or less the same as they do now, but where there was a different set of perceptions. Sorolla doesn’t bridge the chasm, as truly great artists do. He is firmly on the side on which we are not. The side occupied by those who are prosperous and unthinkingly sure of their own social position. People with the money to buy seductive art. 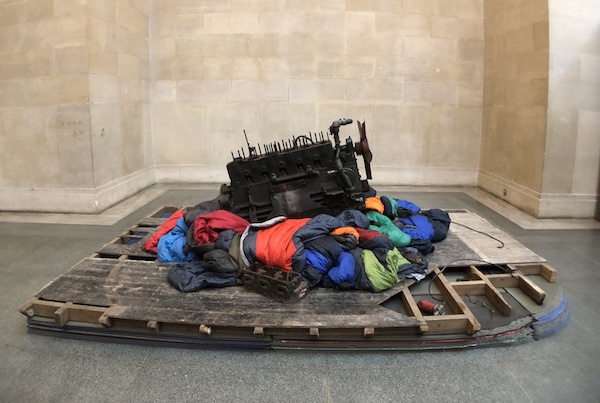 Mike Nelson’s huge installation The Asset Strippers occupies the whole of the Duveen Galleries at Tate Britain. At first sight what he’s done looks like a cousin to Phyllida Barlow’s Cul De Sac exhibition currently on view at the Royal Academy -a whole lot of abstract forms elbowing each other, competing for dominance in an even bigger and more palatial space. As the press release informs one:
“Mike Nelson has transformed the heart of Tate Britain into somewhere between a sculpture court and an asset strippers’ warehouse, carefully selecting objects from a past world, the post-war Britain that framed his childhood….Presented together in an installation which fills the Duveen Galleries, Nelson creates a melancholic journey through Britain’s recent social and political history.”

In other words, this isn’t art, or not primarily so – it’s a nostalgic collection of relics. It’s true first cousin is not Cul De Sac, but yet another show at a major London institution: Martin Parr’s photographic show, Only Human, at the National Portrait Gallery. This, too, celebrates a certain kind of Britishness, now fading gently into the past. We are persuaded to think of what Nelson has done as ‘art’, chiefly by the framework provided for what he shows us by the grandiose nature of the setting. The whole exhibition is a single romantic gesture. As Shelley’s poem says, referring not to Britain’s crumbling industrial heritage, but to a long-gone Egyptian pharaoh: “Look on my works, ye mighty, and despair.”

One has to admit that Sorolla’s world, distant as it now is from ours, and sensitive as it only occasionally was to human woes, seems to have been, though socially unjust, a lot more cheerful to live in – at least for some – than the one we have right now.