The Space Shifters show at the Hayward lives up to its title, often in ways you don’t quite expect. This, in spite of the fact that it isn’t absolutely bang up to the minute. Many of the works on view aren’t all that new. There’s stuff here that does back to the 1960s, 1970s, 1980s and 1990s. It’s none the worse for that. As the title suggests, much of its content consists of works that enter into a dialogue with the spectator. It’s not so much a case of “Now you see it. And bow you don’t.” It’s more a case of “You look at it, and you think you’ve got it completely. Then you look again and discover you haven’t.” It changes before your eyes.

When I recently went to the Frieze sculpture show, now on in Regent’s Park, I was struck by the fact that contemporary public sculpture seemed to be struggling very hard to make itself relevant – out there in the open, available for every passer-by to look at. Too many of the items on view seemed to have no particular public relevance. Nearly all of them seemed to be screaming or else muttering “The real subject of contemporary art is me, me, ME!”

You are invited to enter into a dialogue with the objects on view.

It’s not like that in the enclosed spaces of the Hayward. You are invited to enter into a dialogue with the objects on view. Even when the exhibits are quite large, most of them make no pretence to monumental status. In its entry for the beaded curtain works of the late Felix Gonzalez Torres (1957-1996), the exhibition guide quotes the artist as saying “without the public these works are nothing… I ask the public to help me, to take responsibility, to become part of the work, to join in.” What he meant by this was that he wanted people not to stand apart from them, but rather to push through them.

Few, if any of the other works go as far as this. The gallery abounds in ‘please don’t touch’ signs. The real dialogue between the works on view and visitors to the show very often takes place through the use of shining, mirrored surfaces. One of the most striking examples of this is Yayoi Kusama’s candidly entitled Narcissus Garden, which consists of hundreds of stainless-steel reflective orbs.

Standing there in the midst of them, you see your own miniature, distorted image everywhere you look.

When Kusama first made these mirror balls, for an unofficial intervention at the 1966 Venice Biennale, Kusama sold individual balls for the equivalent of two dollars apiece, under a sign that read ‘Your Narcissism For Sale’. She now sees these installations as invitations to ‘self-obliteration’. It seems that in this case, you, as spectator, can have it both ways. 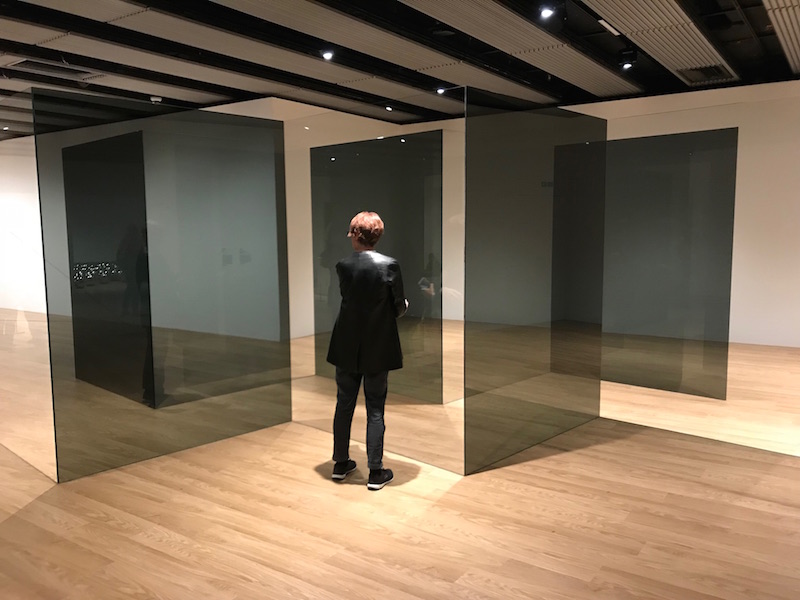 One of the things that amused me, when I went to the healthily crowded preview of the show, was the comparative absence, rather than overwhelming presence, of visitors taking selfies in this huge array of mirrored objects. There were some, but only a few. Many of the exhibits were, of course, created before the current cult of the selfie existed, but I would have expected people to seize the opportunity. Perhaps they were scared off by the fact that so many of these works offered distorted, therefore unflattering images.

Perhaps another reason was the disorienting quality of the whole exhibition set up – the way in which so many of the exhibits, such as the Larry Bell Standing Walls installation (1969/2016) seemed to dissolve space in which you stood.

The exhibition, in fact, can be summed up as an object lesson in contemporary disorientation. Don’t go if you’re feeling giddy. Otherwise, it’s a lot of fun, with a tiny moralistic serpent coiled at its very core.