The main items in Sterling Ruby’s exhibition at Gagosian Britannia Street (his first solo show with the gallery here in London) are huge works from a series called ACTS (2006-2018). In this case, the word has no direct reference to Holy Scripture. It is instead an acronym for the phrase ‘Absolute Contempt for Total Serenity’. The exhibits – should one call them sculptures? – consist of liquid dye trapped inside sheets of clear urethane and placed, free-standing, on top of scuffed spray-painted inscribed Formica pedestals.

I didn’t feel the slightest twinge of self-identification – ELS

The exhibition handout claims that: “In ACTS, the juxtaposition of unfeeling laminate slabs against vibrantly printed urethane is a potent one; it transforms the urethane from a passive glassy vitrine into an active agent of incarceration that suffocates the blossoming furls of dye.” 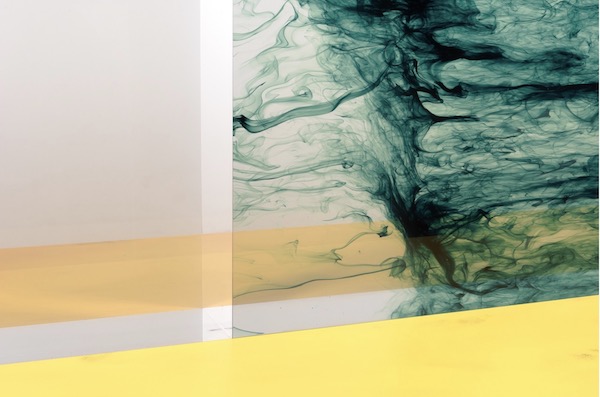 Well, yes, if you say so. The spectator is confronted with a new version of the pathetic fallacy. Here is how Wikipedia explains this situation in general terms :
“The phrase ‘pathetic fallacy’ is a literary term for the attribution of human emotion and conduct to things found in nature that are not human. It is a kind of personification that occurs in poetic descriptions, when, for example, clouds seem sullen, when leaves dance, or when rocks seem indifferent. The British cultural critic coined the term in his book, Modern Painters (1843-60).”

Wikipedia goes on to give a bit more detail. It notes, for example, the Ruskin’s use of the term was hostile. He used it to “attack the sentimentality that was common to the poetry of the late 18th century.” The web-site also admits that the meaning of the phrase has changed in more recent usage: “Ruskin’s original definition is ‘emotional falseness’, or the falseness that occurs to one’s perceptions when influenced by violent or heightened emotion. For example, when a person is unhinged by grief, the clouds might seem darker than they are, or perhaps mournful or perhaps even uncaring.”

For better or worse, when I was confronted with these vast and not unhandsome Post-Abstract Expressionist objects, I didn’t feel the slightest twinge of self-identification. Maybe that was simply my own deficiencies as a spectator. Or perhaps, on the other hand, the high tide of high Romantic feeling, the identification we are supposed to feel when contemporary art confronts us with objects of this sort, and firmly instructs that we ought to feel moved by them, has simply withdrawn, leaving only a barren beach marked by a few puddles and pebbles behind it.

There is one additional item in the show, unconnected with the ACTS. This is TABLE (DOUBLE LAST SUPPER) made this year. The handout tells you that this considerable object is part of a series – one “that explores the concept of personal and cultural archaeology.” What this means in practice is that when in 2015 Ruby moved into a very large space in downtown Los Angeles than had once served as a manufacturing warehouse, he found there, left behind by the previous occupants, some large welding tables. He decided to turn them into works of art. “By affixing jutting metal pipes, faucets, and frying pans to the tables and covering them with tumorous masses of solder, Ruby stratifies and memorializes every act of labour that once took place on their surfaces, whether by the hands of workers from the building’s previous life, or of the artist and his studio.” The piece thus becomes “a hulking archaeological remnant from some unnamed human history.”

Substitute the adjective ‘fictional’ for ‘unnamed’ in the quote above, which is once again from the gallery handout, and you’ve pretty much got the drift. This cumbersome item is essentially a monument to the artistic ego, and to that ego’s ability to change the boundaries of whatever world it happens to inhabit. As such the sculpture is to be regarded as a sacred object – the bracketed ‘Double Last Supper’ in the title gives you the clue. Alas once again, despite the object’s hulking size, any sense of awe tended to elude me.

In the world inhabited by Sterling Ruby, I am, with regret, essentially an agnostic.