Marina Adams What Are You Listening to? LGDR (Top Photo)

I first saw Marina Adams’ bold, beautiful abstractions in a 1998 show at the wonderful “Art in General. The group show,” Crossing Lines”, curated by Denyse Thomasos and Madeline Weinrib, also introduced me to the paintings of Stanley Whitney, the husband of Adams. Denyse’s large black and white cross-hatched canvases are now a glorious anchor to the current Whitney Biennial. Madeline is working with the Metropolitan Museum on an artisan-created design project for the Met Store, inspired by the Islamic collection. And Marina and Stanley have gone on to well-deserved art super stardom.

Adams has said, “Whenever possible, I try to establish a dialogue between painting and architecture.” Her works’ success in the magnificently restored Beaux Artspace is immediately apparent. The jewel-toned palette almost glows as colours seamlessly contrast and flow. Her most recent works (2022) are the largest, but the artist’s signature style of fearless and fierce colour and hand-built geometric shapes are equally as compelling when seen in the large and small works on paper.
A freewheeling painting, “Bacchus and Ariadne” (2022), was born from a central magenta hourglass and swathed in jade green, crimson and burgundy morphs into a perfectly matched background that is mirrored in the burnished wooden walls on which the canvas hangs. Adam’s bold repeating patterns pay homage to Islamic decoration, echoes of Sonia Delauney, and artisanal textiles through a cool contemporary lens. Luminous light and sensual shapes reflect the influence of artists’ workspaces in NYC, Long Island and Italy. Marina Adams’ magically modernist paintings are eloquent, elegant and unforgettable. (And somehow uplifting in these troubled times.) Top Photo: Courtesy LGDR Until 1st July 2020 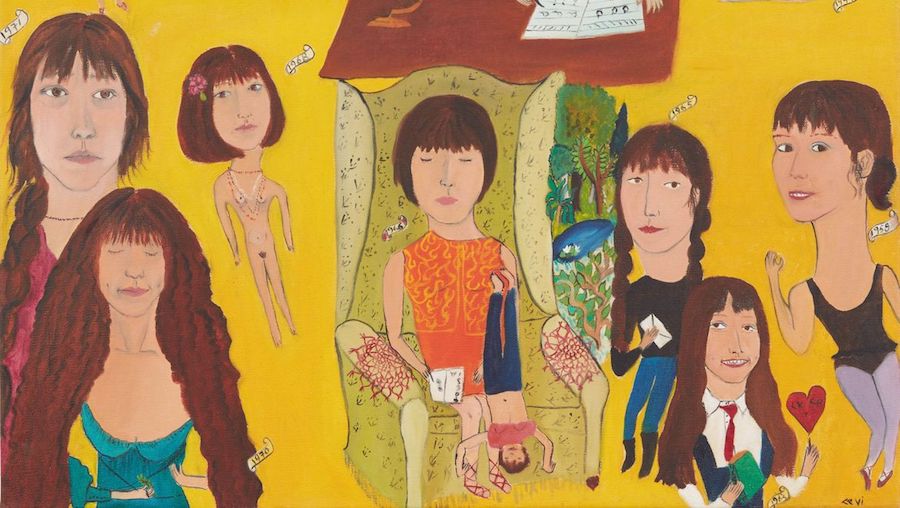 In her first NYC solo show, Chilean-born Celia Vicuna’s prescient political and poetic vision celebrates indigenous cultures with a decidedly non-capitalistic reverence for the earth. The painter, poet, and performance artist has lived and worked for forty years in New York.

City, and was an ecological activist long before the term was coined. The Guggenheim show is her first NYC solo museum exhibition and coincides with her Lifetime Achievement Golden Lion received at this year’s Venice Biennale. Vicuna is also the author of over two dozen volumes of poetry.

Prescient and mystical, Vicuna’s breadth of vision ignites all three floors of her Guggenheim exhibition. Reinventing the traditional Andean Quipu (Knot), a traditional thread weaving that was used for communication, Vicuna has created a site-specific massive wall hanging. The delicate and looping crimson maze harkens to menstrual blood. I especially loved a self-portrait “La Vicuna” 1977, portraying the artist with her power animal and namesake. A recent painting, “Liderezas”, 2022, celebrates Indigenous women leaders. Vicuna’s distinctive figuration riffs on colonization, feminism and a rich appreciation of indigenous cultures.

This is the first exhibition the Guggenheim has mounted that is dedicated to the work of a South American woman artist. Vicuna’s multidisciplinary and shamanic work is energized by her historical engagement with the earth and her mirrored vision of fundamental humanity. (Photo Courtesy Guggenheim Museum New York and the Artist) Until 5th September 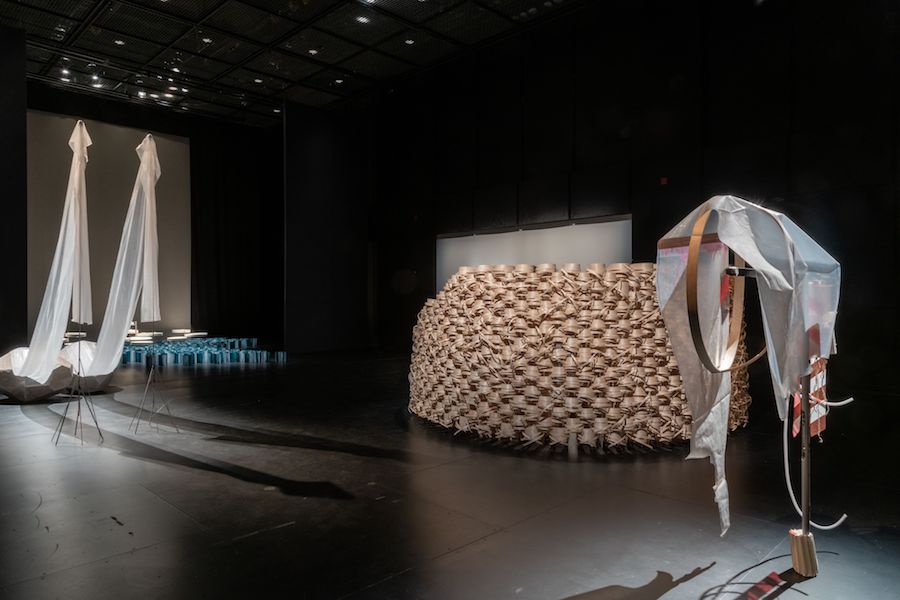 Maud Cotter at Irish Arts Center A Consequence of

For decades, Maud Cotter has explored the nature of form and physical reality. Often using quotidian materials, the multidisciplinary artist creates both powerful and temporary work. This inaugural building-wide solo site-specific installation is a gorgeous introduction to the newly opened Irish Arts Center. The original brick facade building has been beautifully renovated, with a flexible public theatre space, balconies, sweeping ceilings and a great bar with beer on tap and traditional Irish fare.

“without stilling” is a signature Cotter creation. The work’s physical presence focuses on organic material (birch plywood) that has been shaped into a honeycomb, mirroring constant movement. Hundreds of paper-thin slats have been intricately woven and sensuously curved into hand-cut ellipses.

Another major piece, “the moon is falling,” uses plastic sheeting to form a lapis blue shape from which fungal-like sculptures sprout. Cotter spoke of “pulling things back together” and how the use of plastic is “entertaining to the eye.”

The ephemeral drawings, wall pieces created out of locally found materials, and sculptures have all been created since 2015. The artist lives and works in Cork and is represented by Domobaal Gallery in London. Maud Cotter is a master of fluid imagery that is both lyrical and logical. Photo Courtesy Maud Cotter Until 26 June 2022