Film is Tacita Dean’s medium. Not that catch-all of so many contemporary artists, video, but analogue film with all its implicit nostalgia and history. Although Tacita Dean emerged in the 90s, at the height of conceptualism, she’s always been essentially a Romantic. She’s the daughter of a circuit judge and granddaughter of Basil Dean, the theatre and film director and producer who founded the first sound studio in Britain in Ealing in 1931. Landscape has always been central. Her beautiful anamorphic film, Disappearance at Sea, 1996, measures time by the regular clank of the revolving lighthouse lamp at St. Abb’s Head, in Berwickshire. It’s a mediation of sorts, slow, rhythmic and primal. She doesn’t do slick. She doesn’t do fast. There’s a ritualised magic about such works where the film frames are composed like paintings. A branch of a tree lifts in the wind; the sun slowly turns orange on a far horizon. Now she’s been offered what few artists have achieved, unprecedented simultaneous exhibitions at the National Portrait Gallery, The National Gallery and, later in May, The Royal Academy. This has given her the opportunity to explore the different genres of portraiture, still life and landscape. It’s a big ask.

These two exhibitions, despite some engaging moments, feel drawn too thin – SH

Walking into the National Portrait gallery, you enter a small claustrophobic space where there’s a film of David Hockney smoking. Smoking is intrinsic to his creative practice, and he’s often been a grumpy and staunch defender of his right to continue the practice. In the sixteen-minute film taken in his Los Angeles studio, surrounded by a series of portraits he did for his 2016 exhibition at the RA, he puffs away on five cigarettes as he thinks about painting. Occasionally he laughs a little uncomfortably as the camera lingers over his face. This is accompanied by the rackety sound of the film reel that made me think of being a child, sitting in the dark and watching those jerky family holiday ciné films when the picture would suddenly run out, and only a whir in the blackness would remain.

There are also ‘portraits’ of Cy Twombly, Mario Merz, Claes Oldenburg, Merce Cunningham and the poet and translator, Michael Hamburger. Stillness and quietness run through these works. In the film about Hamburger, he barely appears at all. We mostly see his gnarled hands turning his collection of apples from his apple orchard in fractured English autumn light, as a poet might turn over single words. You can almost smell the withered musty skins.

The multi-screen piece of Merce Cunningham is even stiller. In six films of six different ‘performances’ he hardly moves, while elsewhere Claes Oldenburg is shown organising and fiddling with objects and artefacts in Manhattan Mouse Museum. Upstairs, in the Stuart room, among the sublime Nicholas Hilliard and Isaac Oliver miniatures, Dean has placed a tiny film diptych. The title is taken from a line of Shakespeare’s Hamlet, His Picture in Little. It depicts three actors of different generations, David Warner, Stephen Dillane and Ben Wishaw, all who have played the Danish prince. The miniature anamorphic film pays homage to the new ideas of the Renaissance. Through the use of special stencils, slipped into the camera’s aperture that exposed different parts of the film frame, Tacita Dean was able to invite the actors to sit side-by-side without them having to meet. It is the most successful piece in the show. Less successful, for my money, is the display of still photographs GAETA, fifty photographs plus one, 2015 taken in Cy Twombly’s studio. It is the distilled presence of Cy Twombly that gives them power, rather than anything intrinsic in the images.

Over at the National Gallery, Dean is primarily a curator. In STILL LIFE she has organised work ranging from 17th-paintings to recently completed pieces in a variety of media by contemporary artists. Among the Gwen John bird cage and Roni Horn’s Dead Owl, she has placed, high on the gallery wall, Ear on a Worm, her film of a small bird flickering in a square of painterly blue sky as it sits chirping on an overhead wire. 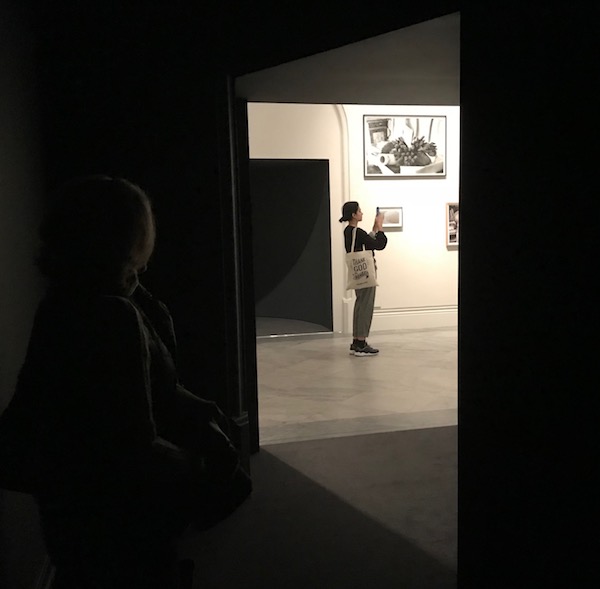 She has said that she is interested in objects in the landscape and has included some wonderful paintings of 1814 by Thomas Robert Guest of Bronze Age and Saxon Grave Goods, excavated from a Bell Barrow in Wiltshire.. Her own passion for the painter Paul Nash is underlined by the inclusion of his Event on the Downs of 1934, with its gnarled tree stump and mysterious tennis ball, which has been set between her diptych Ideas for a Sculpture in a Setting, inspired by one of the many flints collected by Henry Moore and kept in his studio. Shot is black and white the object becomes part vertebrae, part talisman, echoing the rock formations and stone henges to be found in this part of the countryside.

LANDSCASPE, which opens later in the spring at the RA will be the first exhibition to be held in the new Gabrielle Jungels-Winkler Galleries since the redevelopment of the gallery and will explore landscape in its broadest sense, from botany to cosmography. With an eye on the traditions established by landscape artists such as Constable, Gainsborough and Turner, who championed the genre, Tacita Deane has created works for these new spaces, including a large-scale photogravure, Forty Days, a series of cloud chalk-spray drawings on slate and a monumental blackboard drawing, The Montafon Letter. The exhibition culminates in an ambitious new 35mm Cinemascope film, Antigone. 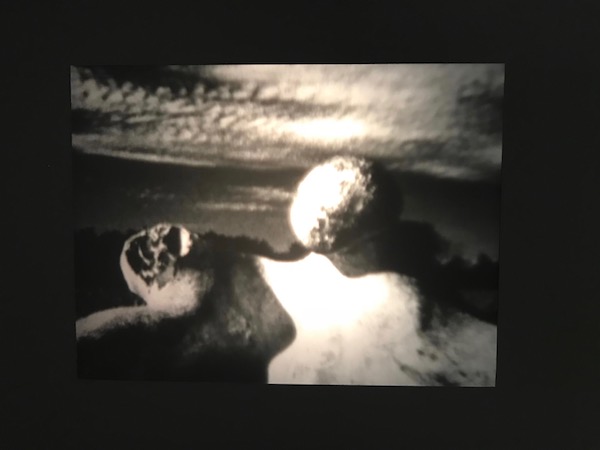 And does the work really justify all this space in three public institutions simultaneously? Well, yes and no. Dean is an interesting artist. At her best quietly poetic, as in the painterly The Green Ray, 2001 where we can glimpse, if we are patient, the brief refractive green flash caused by the sun setting over the sea. Here she captures something atavistic, in real time, something sublime that could not be caught on anything other than film. Though her use of light she touches on the history of painting, on the primal and creates a sort of truth.

But these two exhibitions at the National Portrait Gallery and The National Gallery, despite some engaging moments, feel drawn too thin. One intense exhibition would have been enough, though it will be interesting to see the third show at the RA. Still, you have to be very big to carry the weight of these three august institutions and good as she is, she is, after all, not the only show in town.

Tacita Dean Landscape, Portrait, Still Life The National Gallery, National Portrait Gallery, And Opening In May At The Royal Academy

Sue Hubbard is an award-winning poet, novelist and freelance art critic. Her new novel Rainsongs is out from Duckworth. Purchase Here