The Greek artist Panayiotis Vassillakis, known simply as Takis, born in Athens in 1925, is a very senior member of today’s international avant-garde. His new show at Tate Modern – what? Not a woman, not a person of colour? – therefore qualifies as an event of some interest.

Especially in today’s complex circumstances. It is not, for example, that Takis’ variety of avant-gardism lacks social and even political roots. As the leaflet handed out with the Tate show tells one: “Social and political activism hold a central place in Takis’s life and practice.” As a young man, he lived through World War 2 in Greece, and through the civil conflict that followed. He has long been a supporter of the causes that resonate today. He was, in the 1970s a founding member of the Art Workers’ Coalition. This, as the leaflet, says: “included artists, filmmakers, writers, critics and museum staff. The coalition advocated for museum reform including a less exclusionary exhibition policy concerning women artists and artists of colour.” Reading this, one can quite understand why the present regime at Tate might want to celebrate Takis with a show. 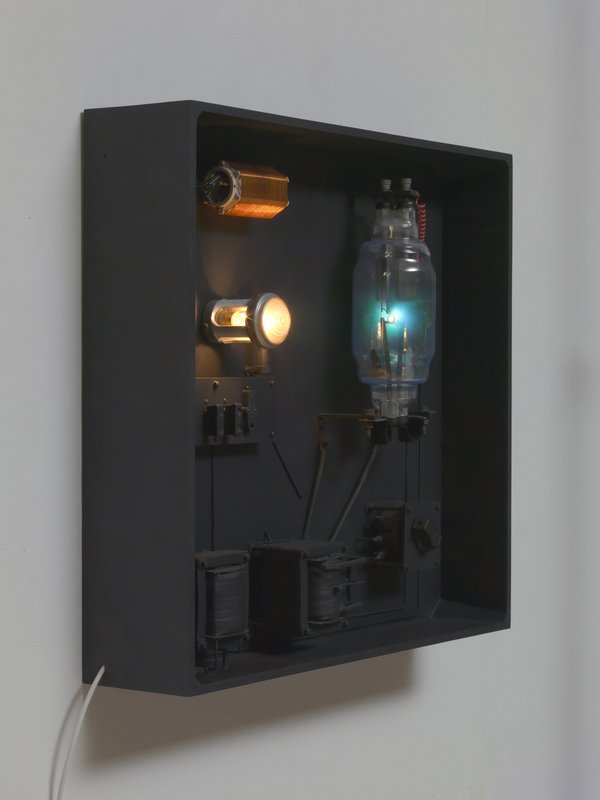 The exhibition itself, however, has little or nothing to say about social or political causes. There are no statements, overt or covert, about either gender or race. Nothing about contemporary art as it operates within society. What it does, instead, is to over a series of technological tricks and wonders. Here you have suspended spheres, antennae, dials and gauges, flashing lights, sudden waves of sound. “My desire as a sculptor,” Takis explains, was to learn to use this [technological] energy, and through it, to attempt to penetrate cosmic mysteries.”

In order to accomplish that, Takis has moved from one artistic environment to another. He left Athens for Paris in 1954, when France was still clinging on to its position as the centre of the contemporary art world. From there he made regular visits to London in the late 1950s and early 1960s. There he teamed up with the artist-run Signals gallery, so named as a tribute to Takis’s sculpture Now he is back in Greece, where he has a personal foundation, opened in 1993. Making signals, often in a quite literal sense, is very much what his production as an artist has been about. Tate acknowledges this in the names given to the various spaces that house the show: Magnetism and Metal, Poetry – Transmission and Space, Sound and Silence, Light and Darkness. And, finally, a room called Music of the Spheres. Under the mechanical, there lies something mystical.

Though the works on show are quite solidly present in the galleries they occupy, they often seem to try to escape the idea of materiality. There are spheres that float, suspended from the ceiling. There are flashing lights. There is a multitude of quivering stalks. Many of the sculptures move. The movement is often based on an adroit use of magnetism.

Much of the technology is repurposed, using items found in military surplus stores, discount electronic shops and flea markets. Like any number of contemporary artists, most of them younger than himself, Takis has been adroit in re-purposing what are in fact discards – parts from aeroplanes and cars, industrial machine parts. He incorporates versions of the traffic signals that police our modern urban lives. He scavenges, then he re-invents.

What this suggests, maybe unintentionally, is the degree to which this kind of avant-gardism still exists on the margins. It entertains. It offers commentaries. It certainly has, in Takis’s hands, genuine moments of poetry. As for hitting you in the solar plexus – I think not.

After a long hiatus, the Ismaili Centre, situated opposite the Victoria & Albert Museum in Exhibition Road, is re-opening its space for exhibitions again. First up is Kevork Mourad, who identifies as Armenian, though he was born and grew up in Syria, moving to Armenia in 1992. The exhibition is the offspring of a project that started life at the Aga Khan Museum in Toronto. The theme of the show is the Tower of Babel, which seems appropriate, given both its authorship and the place and situation in which it is now being shown.

I have often thought of this story, as it is said to be a moment that divided mankind – KM

Mourad says of his chosen theme: “I have often thought of this story, as it is said to be a moment that divided mankind. I see it as a moment when diversity was created.” He adds, apropos of his work as an artist: “It can connect people who speak different languages and come from different cultural backgrounds. What Babel separated, visual art connects.” Sure enough, as you walk in, a version of the legendary Tower rises up from the basement of the building to greet you. Since it has no colour and is made of fragile materials, it offers a somewhat ghostly presence. You feel that ancient legend is ready to whisper in your ear. 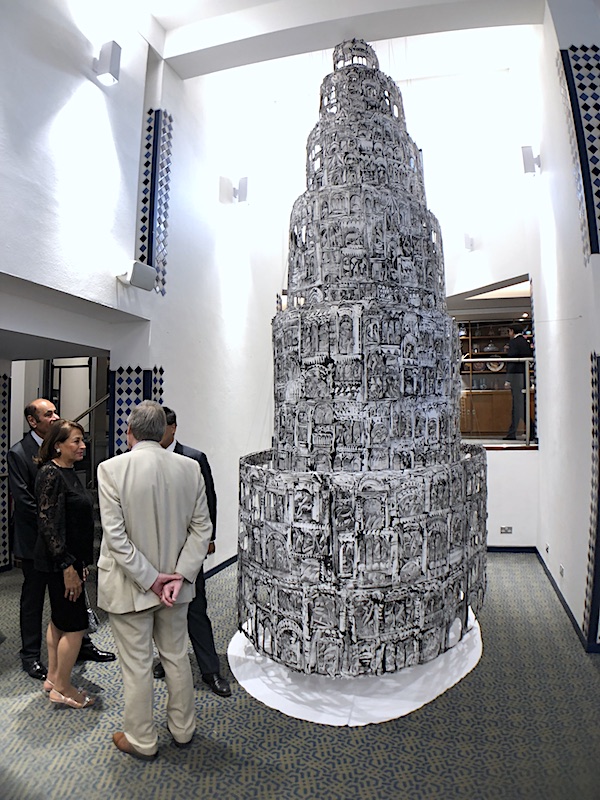 Since what you enter through is a rather posh boutique, full of goodies designed to tempt prosperous Middle Eastern ladies on a shopping trip to South Kensington, this can be disconcerting in more ways than one.

Downstairs, in the main space, the paradoxically monochromatic visual clamour continues, in works which range in size from the quite small to the enormous. The biggest of them all is a screen made from a large number of different pieces suspended from the ceiling on strings. The underlying theme here is still architectural. What one is looking at seems like an ancient city in flux – its buildings trembling and ready to fall. As a metaphor for the urgent situation in the Middle East, not only in Syria but also in Iraq and in Iran, it is undoubtedly effective.

The quality it lacks is any sense of the permanent, but that aspect is clearly intentional. Part of the installation’s purpose is to remind one of the fragilities of things, not only in the troubled area to whose history it directly refers but also to regimes striving in vain for stability throughout the world.

The artist has created a theatrical experience. He has, for example, made a full-length performance piece to accompany the 2018 Armenia! Exhibit at the Metropolitan Museum in New York. What this event in London has, for better or worse, is the fragility of theatre. But that has also been the fate of a lot of art in the past. Much of it, even work by the most notable names – Leonardo’s designs for Sforza masques, Rubens’s triumphal cars – vanished promptly and almost entirely very soon after it was made. What we have, in the case of the two examples just cited, is only a handful of preliminary sketches. “Like dream, like a vision, like a bubble,” as the Diamond Sutra puts it. Look away, and the thing is gone.