Looking around the NPG’s new Taylor Wessing Photographic Portrait Prize exhibition, I was immediately reminded of the fact that we are right in the middle of a culture war. Culture War is, in fact, the title of a new book by Alexander Adams of which I have just received an advance proof copy. In a brief concluding statement, Adams talks of the way in which “Identarian, Feminist, New Leftist, Marxist and Neo-Marxist beliefs underpin assumptions and actions of some producers and consumers within cultural fields today.” The stress on what he calls Identitarianism is very much of view here. The show is very much about giving a helping hand to racial minorities. Fully one-third of the photographic portraits on view represent subjects who are of African origin.

The winner of the First Prize, Alice Mann, offers a delightful group of portraits of South African ‘drummies’ – that is of very young black girls from disadvantaged communities in South Africa dressed as drum majorettes. These are particularly resonant if you remember that the idea of drum majors and drum majorettes is one imported to South Africa from the United States, and from white communities there, not specifically African American ones. 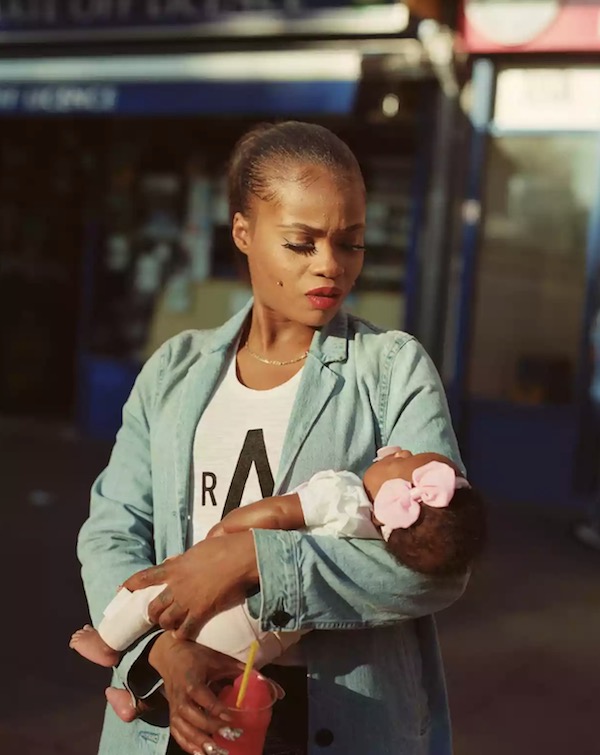 Enda Bowe, winner of the £3,000 second prize for his portrait of an elegant mixed-race mother holding her baby. Enda comes from a housing estate in Clapton, East London.

And the winner of the third prize went to Max Barstow (b. 1994), a London-born photographer with an interest in images about city life. His photo of two elegant Middle Eastern women in hijabs, out shopping in London’s West End aims to make un-posed portraits with the intensity of images made by great studio portrait photographers such as Richard Avedon and Irving Penn. .

Given the heavy emphasis on race in the selection, there is a rather curious absence of subjects from the Far East, either made here in Britain or taken abroad. There is indeed a special hors concours feature – six images by the Japanese photographer Rinko Kawauchi, showing, one is told, members of her immediate family. In fact, only three are recognisable as ‘portraits’ in any usual sense of the term. Of these, two are close-ups of infants.

The exhibition makes no acknowledgement of Britain’s now large immigrant population from China. For example, in the vast West London apartment block I live in, at least a quarter of the residents are Chinese, and we have an excellent Chinese restaurant on the ground floor that seems to derive most of its trade from groups of Chinese tourists, brought to us by bus.

There is just one representative of the Indian subcontinent – a fine portrait of Coldstream Guardsman Charanpreet Singh Lall, a Sikh who was the first to wear his mandatory turban when taking part in the Trouping of the Colour ceremony that this year, as in other years, celebrated the Queen’s birthday.

This certainly is an image that has something to tell us. The exhibition as a whole, maybe not so much. It’s largely an exercise in rather smug preaching to the converted. Which is, alas, more and more the default position of our major official museums – more particularly when these institutions are attempting to deal with anything contemporary.