There’s something very irresistible in Day Bowman ’s abstract paintings, currently showing on two floors of what was once an épicerie/cordoniere and its living space above built into the ruins of the old walls of the ruins of Chateau La Tremouille, in the small town of La Trimouille in Western France.

It has something to do with the tactility of their surfaces; the way the paint

in its different densities and consistencies asserts its presence; planes of colour having defined edges but then sometimes not; the way it dribbles towards an edge, top or bottom, left or right, depending on its orientation at the time of its painting. There’s the rawness of the way they’re marked with shattering charcoal, scribbled on; something too about the colour, nothing particularly vibrant, just raw mustard ochres, greys and black, rust oranges and watery sky blues, brushed, washed and scumbled onto the canvas.

One immediately senses a familiarity with the aesthetic of Bowman’s works, we seem to be able to read them immediately. Is it through a familiarity with the tradition of British abstract painting that reaches back to Roger Hilton, Peter Lanyon and Patrick Heron? There’s something familiar in the way drawn marks relate to planes of colour and in the palette, all suggesting a relationship to this abstract tradition. Very much in acknowledgment of the integrity and flatness of the picture plane, the intriguing aesthetic of Bowman’s paintings is dependent on the complex articulation of their varied elements within the bounds of the framing edge. Defined and ill-defined planes of colour, drawn and scribbled calligraphic marks, all are the product of the intrinsic qualities of her working materials; paint and charcoal. And all attest to adherence to the tenets of modernist abstract painting, those characteristics of American Abstract Expressionism that became absorbed into British abstraction. Whilst Bowman’s paintings are perhaps not as uncompromising as the American origins of this idiom, she does appear to adhere to their tacit rules.

That Lanyon, Heron and Hilton derived their imagery from visual sources, landscape or the figure, is something that prepares us for Bowman’s paintings, for her works too have an allusion to something experienced outside of painting. All of which amounts to a suggestion of her continuing within a tradition. So how has Bowman torn up the rule book?

In Bowman’s pictures is time[1] writes the poet John Trotman. And time is one of the elements in answering this question. That her paintings take time to make is evident in the rich palimpsests of their surfaces, which carry the histories of their making. “Oils take forever to dry,” she told me, so she usually has two or three paintings on the go at any one time, leaving her time to think about the next step in the paintings. And, whilst within the surfaces of her paintings, there is a slow build-up of the history of the layering of her painting activity, they also hold a certain narrative, perhaps the other part of the answer about the rule book. It’s a narrative accrued over time from things seen and experienced through Bowman’s responsive and discerning eye and translated into marks and motifs. But, it’s something that might have been avoided by those purist abstractionists interested in immediacy.

Writing about her work, the poet, Trotman, invokes the imagery of urban wastelands; gasometers and the entropy of rusting, flaking surfaces, describing how;

The sharp and clean and strong

And with decay comes colour:

In some ways, this approach to painting reaches back even further in the history of British painting perhaps to a particular interpretation of the picturesque, a term I apply loosely of course, but nonetheless one that involves a consideration of ‘that which is fit to be made into a picture’ and of ‘having qualities marked by pleasing variety, irregularity, asymmetry and interesting textures’. But, in my interpretation, rather than being drawn from traditional rustic landscape, Bowman finds things of aesthetic interest in the dystopian Edgelands of urban landscape and also in the littoral experiences of a childhood by the seaside exemplified in the Plashy Place series of paintings. 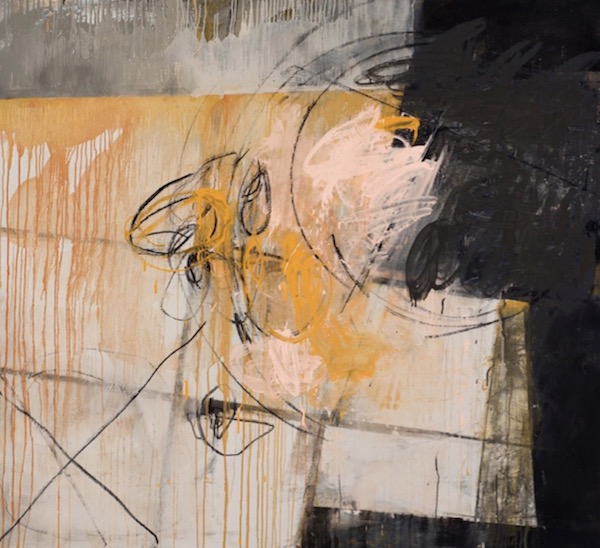 Alluding both to the splashing and marking with paint as well as the wateriness of the subject matter, the ambiguity in the title of the series of ‘Plashy Place’ paintings, encapsulates neatly what Bowman’s paintings appear to be about. All the characteristics that have been mentioned are there in ‘Plashy Place 2’; evidence of the orientations of its making with turps-diluted paint running off to the top edge and to the bottom edge; there’s some sort of edificial shape and its angles and edges with a grid superimposed and a black shadowy space beyond, all creating a rich surface upon which pink, orange and black paint marks have loosely been applied. Her signature charcoal drawing appears at different levels of these deposits: almost perfect circles, hand-drawn, seeming to echo one another reverberating out of the blackness of the righthand edge. The crudely drawn cross, reminiscent, she tells me, of drawing on a wet sandy beach, stretching out from the bottom left-hand corner opens up, offering energy into the centre. Somewhere in between and echoing the loose paint marks are tightly drawn scribbles, which I understand form our conversation, are reminiscent of lugworm casts or footprints on the same beaches, remembered from a childhood long ago.

Occupying a central position in the upstairs gallery, Pashy Place1 is the largest painting in the show. Its landscape format is proportionally slightly wider than the other paintings, which tend to be closer to an off-square format. It establishes the characteristics of the series and tells us something about the way Bowman works. First mapping the essential shapes out on the canvas, she then sets about the process of laying down the deposits of paint and marks. Here though, there is less of a hint of an architectural motif, instead, the surface is crisscrossed by an irregular gridded structure, more map-like, offering a framework for the composition, which then starts to be asserted with the loosely painted areas of orange and black. The palette is in keeping with that of ‘Plashy Place 2’ but with the absence of the pink and with a more nuanced range of rusty oranges. That’s because in her working in series, she mixes up a set of colours that she’s going to use and then adds to them as they get low and typically, she will carry colour over from one painting to the next. Calligraphically drawn marks in paint, conté crayon and charcoal seem to be both embedded in the surface and drawn on it, giving a reading of shallow depth. That Bowman is an admirer of Cy Twombly is perhaps most evident in this work as the marks resemble attempted messages rather than excavations into the surface. It’s interesting the way the white and the black work in this painting in that they, at the same time, push forward on the surface and retreat back allowing the other deposits of marks and colour to operate freely in the shallow space. 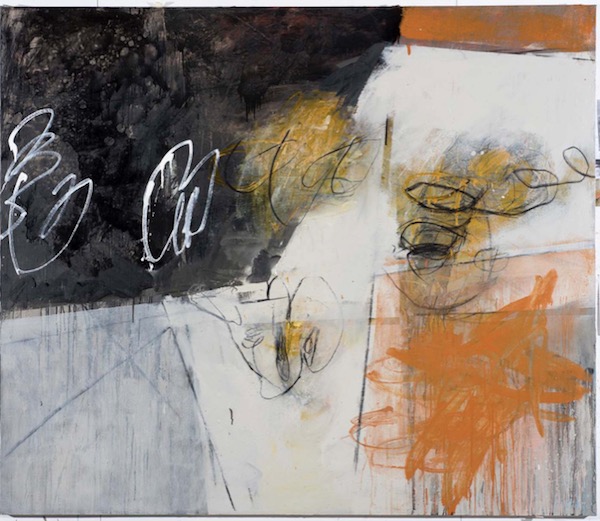 Returning to her squarer format in ‘Plashy Place 3’ an off-center white rectangle, acting as a spatial marker, takes its cue from the large area of white in ‘Plashy Place 1’, perhaps more assertively. It floats in front of a grey washed ground while thinned white paint runs upwards from its top edge to the edge of the painting leaving a flocculated grey mist to cover some black underpainting. Various washes of pink, grey and orange intermingle and flow towards the bottom edge of the painting; they all seem to be the residues from the more intense painting activities that have taken place in the centre of the painting. The flow in each direction seems to fix the gravity of the painting and steady it to allow the little dramatic narrative of scumbled paint marks and scribbled charcoal to play across the centre where the underlying white rectangle barely seems to be able to contain the energy that pushes laterally outwards, bumping up against the righthand framing edge, whilst at the other end the vigorously painted patch of thicker white paint reaches towards the left framing edge. Meanwhile, the brushy black paint laid over a watery blue in the top left corner maintains a less energetic secondary dialogue with the drawn circular motif in the bottom right-hand corner.

Included in this show is a number of smaller paintings that make up a significant part of Bowman’s Plashy Place series. The dimensions of the larger paintings are well-conceived as an arena for the fairly complex articulation that goes on within them. So, the smaller works, which Bowman titles as studies are accordingly and appropriately simpler in their compositions.

In many ways the purpose of a study is to test ideas and, with both Study 2 and Study 4 this is the case. The essential feature of both paintings is a sharply defined black motif presumably created by masking off areas of the canvas to allow for Bowman’s typically fluid painting to be applied. While the paint is more densely applied in Study 2 it’s more fluid in Study 4 where the paint has been allowed to run and dribble. Despite their small size both paintings are pretty powerful, largely because of the aggressiveness of their motifs. Study 2, with its allusion to some sort of abandoned industrial ratchet-like structure or perhaps a ground plan or castellation, Study 4, possibly alludes to the silhouette of some concrete edifice. But, in each of the two, their severity is mitigated by the more playful loosely applied pink paint. Both    these paintings read as visual haikus to the more visually epic poetry of Bowman’s larger paintings and it’s highly likely that having tested them, motifs such as these, will find their way into those larger compositions at some time.

All these paintings typify Bowman’s current work and show her adeptness in their formal organisation, the slow build-up of a painterly surface, her energy and inventiveness in the painted and drawn marks that focus our attention. They demonstrate Bowman’s passion and joy in the handling of her medium. But, more than that, she’s established her own painterly syntax with a succinct visual vocabulary. We sense a profound authenticity in these paintings and she awakens in us viewers an ability to read them aesthetically allowing her to invoke in us a sense for things seen and experienced.

Is this perhaps where Bowman tears up the rule book? For, in what may be seen as abstract paintings, she seems to break the strict rules of abstraction, those that rule out figuration, offering a telling of her experiences. 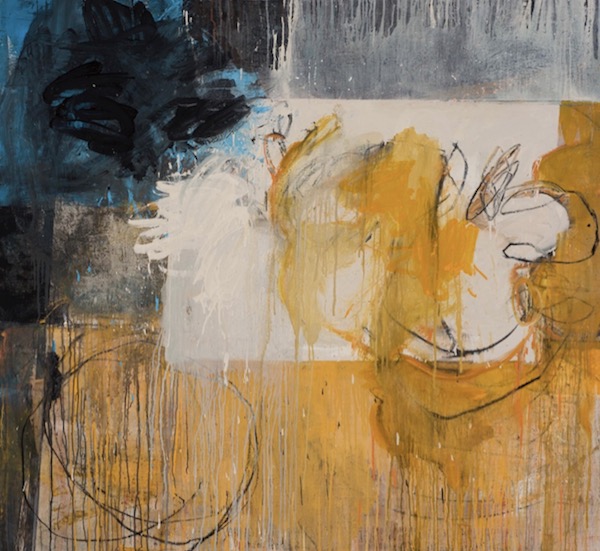 Whilst a case can be made for her adhering to the formalist rules of modernist abstract painting as Bowman has kept within certain rule boundaries, there is also a case for her work being part of a tradition that involves embedding aesthetic experiences of the world into painting – the picturesque and in this sense she hasn’t torn up the rule book. But, a syntactical interpretation of tearing up the rule book implies a continuous process and, in my view, she has very much been part of that process. It’s a view that is held in contemporary thinking about painting, that there are no longer any rules. Thankfully though, she still observes many of the conventions, as we can see, but what marks her out as a painter of such authenticity is her recognition of her part in the process of abandonment, freeing her imaginative intellect and her painterly skill to create such engaging paintings.