James Payne reviews the new film “The Lost Leonardo” directed by Andreas Koefed and encounters a thrilling journey through the murky world of art.

This is a story about money. About a painting bought for a thousand dollars from a shady auction house in 2005 and sold for 450 million dollars only twelve years later. This is the story of authenticity and what that means. But most of all, this is the story about truth – and how truth doesn’t really matter.

this is the story about truth – and how truth doesn’t really matter.

“The Lost Leonardo” is directed by Andreas Koefed, who spent years tracking the painting “Salvator Mundi” on its incredibly complicated journey from New Orleans to London to Geneva to Paris to Saudi Arabia via the shady underbelly of the art world. It involves Russian Oligarchs, Arab Sheiks, art experts, dealers, Jesus Christ, the President of France, critics, shysters and curators. Oh, and Leonardo DiCaprio. Who all have an opinion, and all have their own reasons for getting involved. It’s the money, honey.

“The Lost Leonardo” is not so much an art documentary as an international thriller that John Le Carré should have written. Tom Hanks needs to buy the rights, now!

Early in the film, it is said that “after drugs and prostitution, the art world is the least regulated”, and then the film goes on to prove it.

Our story begins with Alexander Parish, who calls himself a “sleeper hunter”, someone who looks through auction catalogues for mistakes. He spots one – and buys The Salvator Mundi, a painting of Christ, for peanuts, puts together a team that includes the restorer Dianne Modestini, who is convinced, despite its appalling condition, that it is a genuine Leonardo. 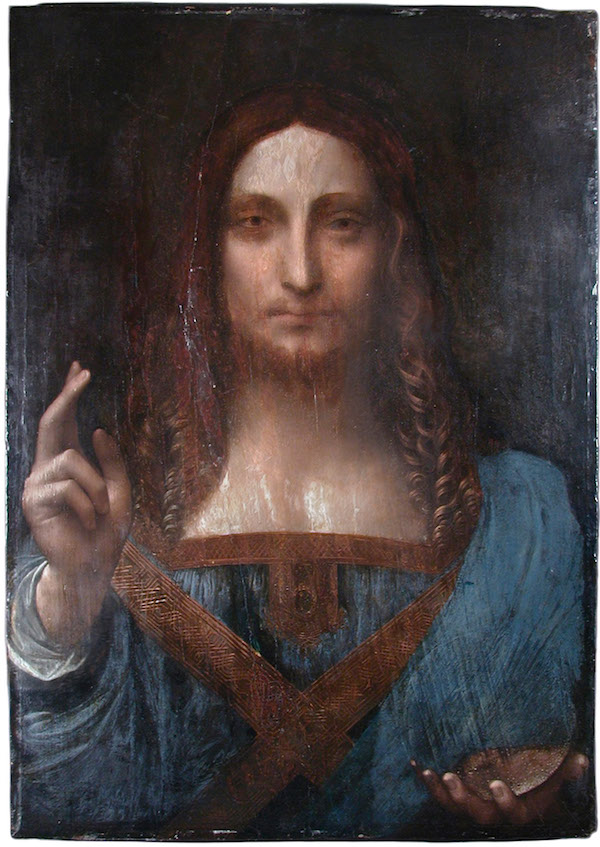 Modestini spends three years lovingly restoring the painting, and in the film, Art dealer Kenny Schachter jokes that it’s a “contemporary painting” for how heavily it was restored.

The art critic Jerry Saltz is the child who shouts out, “the emperor is not wearing anything at all!”. In the film, he tells us (the painting is) “no more real than any of the dreamed-up scams and schemes by people that may not mean to be flimflamming, but in the end, they all went along for the ride.”

Modestini at first, seems to be an innocent who just really wanted to find a Leonardo, but she, like everyone else in the movie, got a nice percentage of the sale when it sold as a genuine Leonardo. It’s the money, honey.

Until now, the movie is about whether it is a genuine Leonardo, but then the movie turns, and you realise, once the art world is convinced it is real, the work takes on a life of its own.

But even after several experts have declared it genuine, no one wants to buy it: too many questions and too many dissenting voices.

Then the film takes another twist, and the dodgiest of dodgy characters, Swiss businessman Yves Bouvier appears (he is hilariously unfazed by being such a shit), swiftly followed by fellow wheeler-dealer Dimitri Rybolovlev, an oligarch you just don’t fuck with. Except Bouvier does….

Last stop for Jesus is Christie’s. This was the most interesting part of the film for me, as we see the oily cogs of the industry turning.

It is to Christie’s credit, that a painting that was ignored when it went on show at the National Gallery in London in 2011, becomes a celebrity, world famous through the power of marketing.

Christie’s rebrand the painting “the male Mona Lisa” (stripping it of its religiosity and making it more appealing to non-Christian bidders?). They describe it as “The only Leonardo remaining in private hands”, even though that’s not true. The Duke of Buccleuch in Scotland has one on loan to the National Gallery of Scotland. But why let the truth get in the way of a good story?

They make an online film for the painting (hashtag “emosh”) called “The Last da Vinci: The World is Watching” that… doesn’t have the painting in it. Instead, it just shows reactions from people looking AT the painting. People awestruck, people weeping and smiling, including Di Caprio and Patti Smith in guest-starring roles. It is a stroke of genius.

Now it no longer matters whether Salvator Mundi is by da Vinci but whether the right people can be convinced of it, and the painting goes on a world’ tour’, the same way Mona Lisa did in 1963. A blitzkrieg of press follows, and by now, it would seem churlish to question its authenticity after it has appeared on Good Morning America and Oprah has given it her seal of approval.

It has the same effect that Mona’s tour did back in ’63; Salvator Mundi becomes famous wherever he goes. Papped by the adoring masses.

PT Barnum, who once said: “The public appears disposed to be amused even when they are conscious of being deceived,” could not have put on the kind of show that Christie’s do.

I already knew what price it achieved but even so, I was on the edge of my seat for the bidding war and gasped out loud as the auction in New York went past the 100 million estimate, past 200, past 300. Past 400! The Auctioneer (the usual posh Brit straight out of central casting) puts on a gavel wielding dance of triumph as he squirms, twitches and preens (and probably orgasms) all over the podium.

After a guessing game as to who bought it begins, the press eventually reveals it was the Crown Prince of Saudi Arabia, Mohammed bin Salman (MBS). A man who apparently loves art but hates journalists (he ordered Jamal Khashoggi’s torture and death).

Saudi Arabia is where the painting’s journey ends, but the film continues, as even more shifty shenanigans continue, involving the Louvre, Macron and lucrative arms deals. Leonardo, what have you started!!

This is a brilliant crowd-pleasing documentary that, is a testament to Koefed’s interrogation skills, has many of the big players involved spilling the beans, seemingly unbothered by how they will be seen.

Is it a Lost Leonardo? It is now.