I am thinking of the Owlman. Ask any insomniac about “The Shadow People”, and their eyes will widen, and they’ll tell you a dozen tales. Perhaps its own mind is playing tricks upon us, the sleep deprivation causing heightened hallucinatory states, It’s a spectre haunting us, maybe it’s demonic possession.

It is 5:14 in the morning. I can’t sleep. I suffer from horrific insomnia, I doom spiral, and I create stories in my head. I am tired but wide awake contemplating, speculating. Out the corner of the eye through my peripheral vision I meet eyes with a shadow, the spectre has an almost humanoid figure, I flinch and try to find the cause to comfort myself, but the blackened figure lurks, causing an eerie discomfort. I blink, and they’re gone. I turn out all the lights so no shadow can haunt me. I lay down to pull out my phone and so exhausted, my brain can’t seem to even hold a single thought together, I pull out my phone and scroll, not reading or looking just as a distraction. 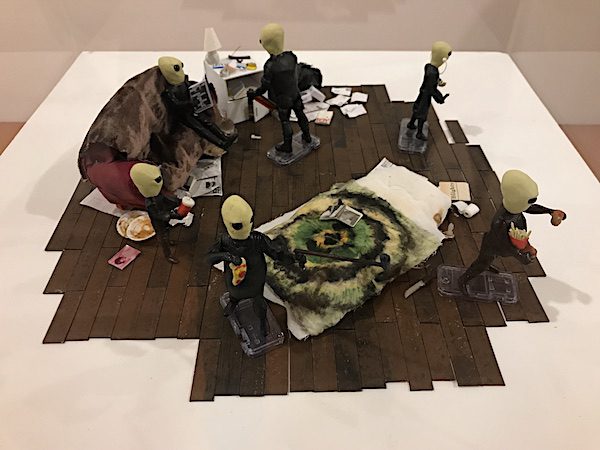 I don’t reply to messages, the warming glow of the screen has become the light-night of modern humanity putting us in a perpetual state of anxiety and alienation. Each notification was sending a rush of dopamine to the brain. I turn off my phone and in the darkness, I’m met with a shroud of black mass entities blurry and distorted shapes, they feel like a figment of the imagination rather than a haunting, they are lurking other me, and because of the darkness, I can no longer decipher between shadow and phantasm. Then I am trapped I can’t as much as wiggle a toe because a shadow person sits on my chest and I am immobilised.

I ask myself is this paranormal or physiological? Experiences of sleep paralysis is a common catalyst in exposure to shadow people, and similar explanations are found historically in folklore in every culture, on every continent with many different names but all sharing the collective concept of an unsettling supernatural ominous creature sitting on a person’s chest, restraining them to their bed. If you do or don’t understand or relate to these experiences, Joseph Sakoilsky’s Owlman illustrates these experiences in ways that words fail to.

Joseph Sakoilsky’s Owlman is a prominent recurring figure in his solo Exhibition The Owlman Cometh at The Stash Gallery, in Vout-O-Reenee’s, the latest addition to carry on the folklore of the shadow people reimagined within the frameworks of collective dystopian anxieties of post-modern urban life. The exhibition is in the appropriate location a short walk from the Haunted Tower of London, in The Crypt of a Gothic church. On the left side, the wall is adorned in paintings that in majority display the Owlman in various corroded doomsday cityscapes with Turner-esque subdued diffused sallow buttery shades of yellow and musty greens reminiscent of the early morning twilight hour. The brushstrokes are soft and wispy and evocative. In stark contrast, the eerie expressionless block black Owlman with white eclipsed eyes either dominate or appear hidden. 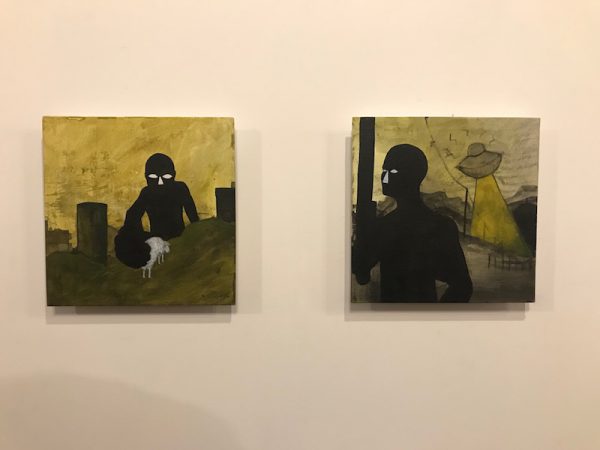 Whether the Owlman is a threatening entity or a lonely misunderstood creature trapped in the isolation force is up to the viewer’s interpretation and state of mind. The Owlman conveys the inevitable isolation, wandering the city in solitude while the masses slumber. The Owlman clutches to the blank luminous rectangle seeking connection representing the existential despairs of modernity, of the conflicting emptiness caused by social media. The Owlman appears trapped in a bleak sleepless purgatory hypnotic state which is conveyed through phantasmagoric symbolism.

On the right, the wall is covered in varying sized framed black ink drawings created by an ink blowing technique to create the shape and then Sakoilsky’s psyche is let loose to create the black mass monsters that exist in the same universe as the Owlman whose definitive face continues to dwell. The style is loose and free with a contrasting balance of simplicity and complexity. The monsters are comparable to Gerald Scarfe’s ink drawings or Alexander Juhasz’s illustrations for Jennifer Kent’s 2012 film The Babadook. 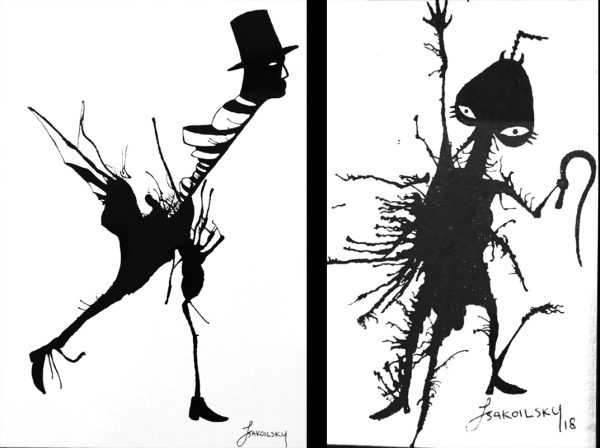 The illustrations are drawn musically and can be felt like a powerfully emotional song that comes from a painful and disturbing place rendering them similar to artists whose music is just as significant as their art, such as Daniel Johnston and Nick Blinko. While Sakoilsky’s paintings are more an external representation of our subconscious, the ink drawings are far more a manifestation of internal anxieties and preoccupations with paranoid conspiracies. The exhibition is a multi-media treat that displays Sakoilsky’s interdisciplinary craftsmanship, and with the reoccurring theme of the otherworldly ethereal extraterrestrial, a whole miniature 3D world is created with extraordinary fine detail. It is thought that a lot of people’s experience with sleep paralysis is an explanation for people’s claims of alien abduction, so it thematically ties the exhibition together. On top of the scene sits a puppet who appears in a video projection God’s Chosen Puppets – D Fine B Fine that conveys Sakoilsky’s full range of talent of miniature set design, sculpture, puppetry, video, and music. God’s Chosen Puppets – D Fine B Fine is a catchy underground 60s garage psych sounding revival song.

Joseph Sakoilsky aka The Owlman is due to play live at the closing party of The Owlman Cometh, with a musical experience. The Stash Gallery at Vout-o-Reenees Wednesday 28th March
The gallery is open 5.00-10.30pm, Monday-Saturday or by appointment by calling 07753702910